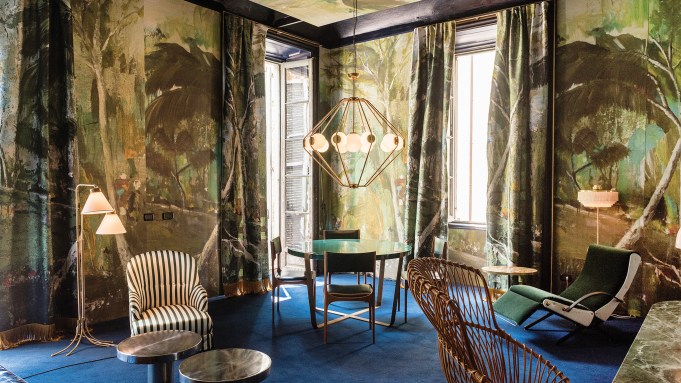 That might sound a tad iconoclastic, but Emiliano Salci is truly convinced that the traditional approach to interior design is outdated.

“Everybody is doing revival — the major furniture companies have restarted the production of their vintage pieces. Decoration is the real added value nowadays, the use of patterns, wallpapers, fabrics…,” he added.

And a sophisticated taste for warm and cozy decor that shies away from cold minimalism without indulging in a flamboyant opulence. That’s the signature of the style he established with Dimore Studio.

Founded in 2003 in collaboration with his American partner Britt Moran, who mainly manages contracts and administration, Dimore Studio is one of the interior design studios of the moment, with projects spanning from billionaires’ houses to hospitality and retail. The latter two account for 60 percent of the company’s business.

“We are both passionate about the Thirties style because it’s elegant but not old,” said Salci. “I actually like what has been done between the Art Deco and the Sixties.”

This is evident in the spaces created by Dimore Studio, which combine an overall classic approach with retro accents and contemporary twists. “It’s all about materials, colors, contrasts, creating a specific atmosphere through the use of light. But above everything, the most important aspect is balance,” Salci said.

Before establishing Dimore Studio, Salci worked in a creative role at interior design house Cappellini. Moran, who was working in the graphic business at the time, in 2008 received a commission from Milan’s prestigious Grand Hotel et De Milan to revamp its interiors and decorate its Caruso restaurant. Their firm was born.

Since then, Dimore Studio has received commissions from an eclectic range of clients, including Dsquared2, which called upon them to decorate its high-end Ceresio7 bar-cum-restaurant. To give an idea of the number of projects on their plates, Dimore Studio, which counts 30 employees, has since January worked on Paris’ Hotel Saint-Marc, the Aesop shop on Milan’s Corso Magenta, the Lagrange12 multibrand fashion store in Turin, the new Pomellato boutique in Milan and the newly inaugurated Boglioli store in New York, to name a few.

“We have many clients coming from fashion — fashion is definitely an inspiration for us because it’s the business from where changes start,” said Salci, who sports an eccentric look, revealing his passion for clothes. “I enjoy fashion. I developed my own language. I like to mix and match different things, I like to play with contrasts.”

A more classic style defines Moran’s aesthetic, signaling that he’s the quieter, more laid-back member of the duo. “I like fashion because I like everything beautiful, but I’m more attracted by those things which are very concrete, practical — that’s the reason why my real passion is interior decoration,” he said.

One of Dimore Studio’s recent commissions was from Fendi for the decoration of the luxurious suites inside Rome’s Palazzo Fendi opened last March.

“We loved working with Fendi because they gave us carte blanche,” said Salci. “Being able to express ourselves is crucial for us — whoever [hires us] knows they will get a specific, recognizable style.”

Along with their studio, Salci and Moran have over the last decade also been developing their own furniture line, which is on sale at Dimore Gallery. Located in the same building as the studio on Via Solferino, the beating heart of Milan’s arty Brera district, the space opened in 2013 and also offers vintage designs by names such as Giò Ponti, Franco Albini and Jean Prouvé, along with historic items from unknown designers.

“Very early on we started thinking about creating our own pieces. We started with a table and an armchair and now we have a full range,” said Moran.

Two seasons ago, the duo launched a line of interior fabrics, which is produced in house in Como. They next plan to introduce bedding in collaboration with Monica Sarti, creative director of Faliero Sarti’s accessories division.

“But our real dream right now is to design movie sets because people already tell us there is something cinematic about our style,” Moran revealed.

And while it may not be cinematic, the company continues to push boundaries. Last June, Dimore Studio, which is a regular presence at Milan Design Week, also presented at Miami/Basel Design at Large. There, Salci and Moran created an installation featuring a space that broke the barriers between indoor and outdoor, creating a sort of veranda where visitors found themselves immersed in a wild, luxuriant winter garden.