Catherine Malandrino:“Keira Knightley has a strong face and cheek bones. She is romantic... 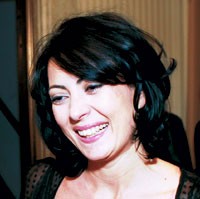 Catherine Malandrino:“Keira Knightley has a strong face and cheek bones. She is romantic and androgynous. I love her versatility; she has an individual style.”

Alberta Ferretti: “Scarlett Johansson is a beautiful young woman with fantastic style. She has glamour and sophistication way beyond her
years. She defines Hollywood royalty.”

Holly Dunlap of Hollywould: “Nicole Richie wins the award for ‘Best Makeover.’ She used to be so trashy and now looks completely A-list, leaving her friends behind in the dust.”

Garavani Valentino: “Reese Witherspoon was considered young and upcoming until she wore Valentino to the Oscars and was seen as a star. ”

Francisco Costa of Calvin Klein: “Catalina Sandino Moreno has a naïve beauty, with tremendous power on the inside. She has a great career in front of her.”