“I’m in a very optimistic mood about design,” said Robert Priest, creative director of design firm Priest Media, which recently executed a redesign of More. He’s not the only one. With two overarching trends emerging in the... 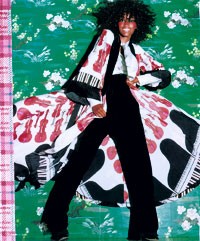 “I’m in a very optimistic mood about design,” said Robert Priest, creative director of design firm Priest Media, which recently executed a redesign of More. He’s not the only one. With two overarching trends emerging in the publication design industry — an updated minimalism more playful than what was seen in the Nineties and an opulent layering best exemplified in Suede — as well as a number of smaller innovations taking hold, magazine design is hotter than ever. Here, a look at the latest visual directions.

BAROQUE: On the opposite end of the design spectrum, there is the opulent pattern variation and dense visual layering of Suede, which Ina Saltz, principal of Saltz Design, called, “The freshest, newest launch I’ve seen this year.” Priest added, “My feeling was it was lively and exciting. Only time will tell with a fairly dramatic change like that. There’s a lot of interest from designers, though, wondering if there are things here they can persuade their editor friends to do.” Maryjane Fahey of FaheyOConnor said, “It was really fun. I hope that they find an audience, though. Admittedly, I was exhausted by the end of the issue.”

THE NEW MINIMALISM: “I’m noticing a new cleanliness that’s very clear and crisp and user friendly,” said Priest, discussing recent layouts in New York magazine, The New York Times Magazine and Vitals. Vitals and New York, in particular, Priest added, are very well-organized and appear to draw inspiration from Web navigational tools to help walk readers through the magazine. David O’Connor of the design firm FaheyOConnor spoke to the style aspects of the trend, saying, “Style-wise, we are going to return to what I am calling a new minimalism. We’ve already seen the minimalism of the Nineties. What’s new is the addition of what I call flourishes that make it fresh.” Those flourishes are nowhere more apparent than in Fabian Baron’s recent redesign of French Vogue, where white space is broken by, say, photographs silhouetted in flame-like patterns or the occasional “whimsical” use of fonts.

SPECIALIZED FONTS: “Editors are prepared to be a little more adventurous today,” said Priest. “When a designer has enough time and money to get new typefaces onto the page, it can be the best way of developing a very individual look for a magazine.” For the recently redesigned French Vogue, O’Connor pointed out, Baron used a new cut of caslon type interspersed with what appeared to be “old woodcut letters.” “There does seem to be a trend toward multiple typefaces on the page now,” said Josh Liberson, a partner in the design firm Helicopter. However, Saltz said inexperienced designers may have trouble incorporating multiple fonts into layouts. “A lot of times, you end up with font soup,” said Saltz. “Someone who’s really good at typography can get a tremendous variation staying within one font family. After all, a magazine has to maintain its character.”

SPLIT COVERS: “More magazines are doing separate covers for subscribers and newsstand,” said Saltz, citing recent dual covers from New York magazine, Men’s Health, Harper’s Bazaar, Esquire and Business Week. Maryjane Fahey said, “As a designer I like the decision [to split covers]. It helps us all out — to have the opportunity to send something that’s more stripped and to really just present an image as a selling point and see how readers react.” Saltz warned, though, that “[this strategy] can work really well or it can backfire. You can create a beautiful image, with fewer cover lines. But the downside is, subscribers may see the other cover at the newsstand and it’s so different, they think they missed an issue.”

PATTERNED LOGOS: In addition to Suede’s wildly patterned logo, Organic Style added stripes to its logo this year. “I wonder if that’s going to get old fast,” said Saltz. “Your background image has to change every month, and a complex image won’t work with a patterned logo. But it’s an interesting idea and a way to stand out on the newsstand.” Priest, too, cautioned, “I’m very interested to see how they treat that logo in a year’s time, whether it stands up.”

HAND-DRAWING IN LAYOUTS: As trends usually do, this one started downtown and worked its way into the mainstream. “Tokion has been doing a beautiful job with hand-drawing,” said Liberson, praising the modest downtown title that is simultaneously published in New York and Tokyo. In its launch issue, Suede also incorporated hand-drawing into the layout of one of its fashion well shoots. Lately, even advertisers have begun using hand-drawn imagery — Calvin Klein Choice ads for fall 2004 featured Charles Anastase’s drawings layered over photography, for example — a sign that, as a design element, this may be more than just a passing fancy.