Hilary Boyajian’s new line, then, is bound to put a new spin on the term retail therapy. Named after the Japanese word for “strength,” Chikara is done in collaboration with HUMC and is specifically tailored to breast cancer survivors. 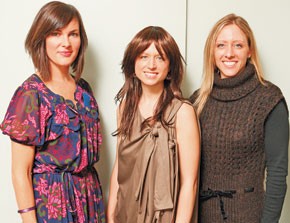 When Melissa Curiale, 32, was diagnosed with breast cancer last year and had to undergo a left-side lumpectomy, she found her sartorial choices to be pretty bleak. “I wore baggy sweaters, things that I felt were minimizing or didn’t call attention to me,” she says. “I avoided crewnecks because they would dip to one side.”

It might seem somewhat insignificant in the face of all the events going on in her life, but, as Tobi B. Greene, M.D., an oncologist at New Jersey’s Hackensack University Medical Center, notes, “Sometimes you need something superficial to go back to being yourself and feeling better about yourself.”

Hilary Boyajian’s new line, then, is bound to put a new spin on the term retail therapy. Named after the Japanese word for “strength,” Chikara is done in collaboration with HUMC and is specifically tailored to breast cancer survivors.

Dresses and tops come with decorative ruffles, flounces or gathers — available in both right and left versions — meant to hide the breast asymmetry that comes with a mastectomy, lumpectomy, radiation therapy or reconstructive surgery. A few of her garments even speak to bilateral mastectomies, like the braided cowlneck shirt or the off-the-shoulder frock. Boyajian promises, though, that her collection does not sacrifice comfort for style. She points to that cowlneck number as case in point: The back dips down low, sexily exposing the skin. “For the first time, I feel confident that people are looking at my clothes because of the design instead of wondering if something is wrong with my body,” says Curiale, a friend of Boyajian and a new fan of her clothes.

The line, which wholesales from $85 to $150, is currently available exclusively at the HUMC’s Ellen H. Lazar Shoppe on Fifth as well as the Chikara Web site. (Boyajian says she expects it to roll out to other outlets in the near future.) A percentage of sales will go to the Susan G. Komen Breast Cancer Foundation.

“There’s a massive hole in this market,” the designer says. “It’s just products that are solely based on prosthetics — silicone breast fillers to the bra and bathing suits.” And these “chicken cutlets,” as Curiale calls them, can shift and sag, making the wearer feel self-conscious all day. “I’ve heard stories of people bending over and having [them] fall out,” Curiale adds.

For her designs, Boyajian also considers elements like loose dolman or raglan sleeves to accommodate lymphedema, an uncomfortable swelling of the arms due to excess fluid, and frontal closures for those with limited arm mobility after surgery. She’s also carefully chosen her fabrications, such as merino wool. “When you go through treatment, you may have hot flashes and body temperature fluctuation,” she notes. “[The material I use] has natural wicking properties.”

Chikara has been a project long in the making for this Pennsylvania native. It actually developed from her Parsons The New School for Design thesis in product design back in 2005. “I wanted to address women’s health issues and also work with textiles. I homed in specifically on breast cancer because it’s in my family,” says Boyajian, noting that both her mother and maternal grandmother are survivors. She designed four garments for that thesis — a camisole, performance top and day and cocktail dresses — that employed this clothing-as-prosthetics attitude. “I took a woman through her day — morning, work, gym and going out,” she says.

It’s a concept Boyajian hopes to revive with her new line. She plans to follow Chikara’s debut this month with garments in other categories, including activewear, swimwear and lingerie. “I’d like to pursue the single breast support, using external prosthesis rather than internal, like 3-D embellishments,” she explains. “If you have a bra that’s specifically designed for your body, instead of having to fill in, it could offer a lot of emotional support.”

Of course, this all begs the question of whether the demand will be enough to propel her business, given that many survivors elect for reconstructive surgery. According to Greene, Chikara will still find an audience for a number of reasons, such as waiting periods before reconstructive surgery, which can vary, and unsuccessful operations. And not everyone ultimately goes for that option. Besides, as Boyajian remarks, “even if it’s a small percentage, it’s a neglected niche and it’s relevant.”