Designer DNA: Back to the Roots

Many brands revisited their roots this season, including Versace and Balenciaga. 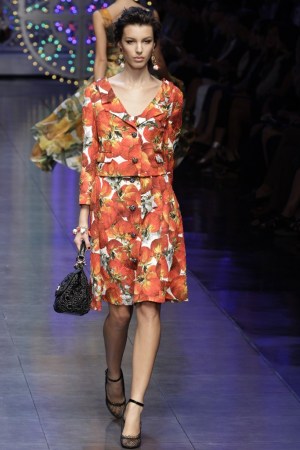 PARIS — As American as apple pie; as Chanel as a quilted handbag.

Vivid similes are pay dirt for fashion brands, which is why so many of them are revisiting their roots and trumpeting their DNA.

Following is a sampling of some of the most evocative examples this season:

Dolce & Gabbana: What could be more Italian than Sophia Loren, a former Miss Italia? Or pasta? Or tomatoes? Each of those elements figured into this transporting show — as the soundtrack, earrings and novelty fabrics, respectively. Add street-carnival lights and a new fine jewelry collection dangling with religious charms, and you get to the molto Italiano heart of this powerful label.

Versace: Back to showing on the Via Gesú, Donatella Versace cranked up the Billy Idol and laid out an illuminated runway for her undersea goddesses. They tottered on towering Lucite platforms, wearing studded leather, printed silks and sexy dresses with sparkling starfish embroideries. “This is a Versace moment,” the designer said during a preview, pointing to a print depicting a mermaid wearing sunglasses. Very Versace, indeed.

Chalayan: London-based, Cyprus-born Hussein Chalayan shortened his signature label to one word, but his spring show was an exhilarating ode to an impressive fashion vocabulary built up over 17 years — minus the head-scratching conceptualism. Deep armholes, futuristic porthole cutouts, folkloric flourishes and airplane references were sketched out in minimalist, infinitely wearable garments.

Burberry: Holograms are swell, but so is hand-beading. Easing up on his high-tech ways, Christopher Bailey paid homage to old-fashioned craftsmanship faithful to the luxury brand’s heritage. Trenchcoats had detachable crocheted collars, chunky bits of mismatched colored wood or raffia flourishes. “I love the contradiction between this idea of artisanal hand skills, things that take time to make, and digital speed,” Bailey said. “They can coexist.”

Nina Ricci: If the gentle floral prints telegraphed the Thirties, that’s because their designer, Zina de Plagny, made them for Ricci in that era. “Very chic, very French,” was how Peter Copping described his fetchingly feminine spring collection, whose nods to Sixties couture, lingerie touches and ladylike fabrics—laces, cloqués and printed jacquards—were all faithful to the brand ethos.

Emanuel Ungaro: Having explored several dubious rejuvenation methods, this storied Paris house now boasts teams “aligned by their devotion to the distinct, rich and timeless heritage Mr. Ungaro established over the course of almost a half a century and which, in recent years, had become obscured,” according to Ungaro chief executive officer Jeffry Aronsson. Chief designer Jeanne Labib-Lamour led the way with draped jersey, colorful prints and subtle sexiness.