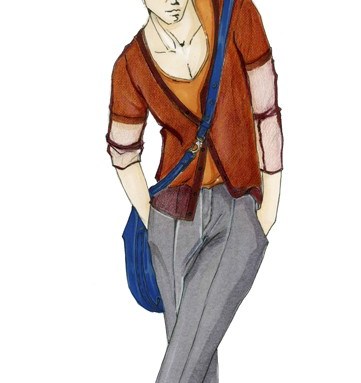 SALVATORE FERRAGAMO
“The portraits of Modigliani, the busts of Brancusi, Les Demoiselles d’Avignon by Picasso: the discovery of art that is primitive and refined.

The same thing that inspired the avant-garde of the 20th century, the Fauve painters, Matisse and Derain. Paris at the turn of the century, discovering the African continent. The colors of earth: rich browns, ochre sands, red coral and blue hues of indigo. A voyage through art, customs, in the infinite variety of the people of the same continent. The fabrics, decor, the dyes, the artisan crafting techniques that break up the monotony of serial production. A free spirit, dressed like an English gentleman.”
— Massimiliano Giornetti

ALEXANDER MCQUEEN
“It’s weird to say how life affects me — as this is my life — but we all have our ups and downs — the good times and not so good times. The good times for me are solitary — time for my brain to take a break, have a cup of tea and rethink and analyze the last few ‘comments’ — seasons? And to decide what direction me and my life should go. S–t! Life can complicate matters. Feeling like you’re on a road to nowhere, trying to stay on the right path and trying not to go down the wrong corridors of life, and not to try to mend things that aren’t broken — repeatedly hitting yourself over and over: must do better!…got to come up with a new vision!…a new hologram blah blah blah…But it is summer and this is a time to stop overanalyzing and just accept this is the way things are and to feel lucky about that. I think that sounds right…or is it?” – Alexander McQueen – 4:10 a.m. – 17th June 2009 – London – in bed with my three children Minter, Callum and Juice…need a cuppa.

LES HOMMES
“The Les Hommes spring-summer 2010 collection draws inspiration from the epic tale and myth of ‘Lawrence of Arabia.’ The basic idea is that of a man who wears refined garments with a military charm with which he will go into the desert, only to leave totally transformed, enriched by the ethnic influences and the allure of the place.”
— Tom Notte and Bart Vandebosch

ZEGNA
“The collection captures an easy yet stylishly relaxed approach. Linen silk and wool, the three purest of summer’s natural fibres, rediscover their essence as the core of a gentleman’s real wardrobe.”
— Anna Zegna

ETRO
“From within outward: The collection has been inspired by the ancient father of Made in Italy, Leonardo Fibonacci, the one who inspired Frank Lloyd Wright’s organic vision of architecture and his amazing exhibition, “From Within to Outward” at the Guggenheim: Go and see it!”
— Kean Etro

MISSONI
“The Missoni man is an explorer, who travels far and returns with a closet packed with memorabilia, classic fabrics, ancestral signs and work gear. As Bruce Chatwin said, ‘Travel does not merely broaden the mind. It makes the mind.’” — Angela Missoni

GIULIANO FUJIWARA
“The Giuliano Fujiwara spring-summer 2010 collection draws inspiration from real life and the present moment; in reaction to the crisis and the global recession, the key word around, which the collection was developed is ‘concreteness.’ The offerings are therefore strong, professedly masculine, with military touches and absolute simplicity. As far as the brand identity of Giuliano Fujiwara goes, the Japanese wabi-sabi aesthetic that seeks out and expresses the beauty hidden in imperfection and in evolution will certainly not go missing.”
— Masataka Matsumura

GIANFRANCO FERRÉ
“A new classic Gianfranco Ferré concept is infused into the summer season, counterbalanced by workwear and graphic shapes. A carefree and liberated yet impeccable attitude rules the hot months highlighted by traditional style and the house’s staple elegance, with a nod to movie stars from the Forties.”
— Tommaso Aquilano and Roberto Rimondi