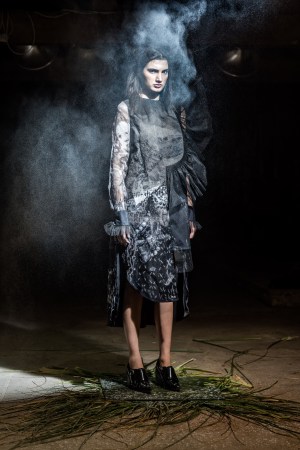 “Elizabethan sportswear” is how designer Nabil El-Nayal described the aesthetic of his women’s ready-to-wear label, Nabil Nayal, on a recent phone call from his home in London. And if fusing fashions from England’s golden age with modern techniques might seem like the ultimate oxymoron, it’s exactly the contradiction El-Nayal aims to explore.

For a budding designer with only three seasons under his belt, El-Nayal, 30, has racked up considerable accolades. He spent his early years in Syria, where his family’s textile business piqued his interest in fashion from the age of three. After moving to England as a teen, he took courses in fine arts and textiles and pursued a bachelor’s degree in fashion from Manchester Metropolitan University. Upon graduation, El-Nayal scooped the British Fashion Council MA scholarship award, which enabled him to pursue a master’s at the Royal College of Art. “I had been living in half-Syria, half-London and I wanted to celebrate those two opposite [sides] of myself. The richness of [Persian culture] and the British side of me — that juxtaposition led to some interest,” he said.

While at RCA, El-Nayal apprenticed for Burberry Prorsum and Rihanna’s River Island. In 2011, Harrods picked up his thesis collection as part of its Harrods Launch platform, a retail showcase for new designers, and Nabil Nayal made its debut at London Fashion Week that year. More recently, El-Nayal was shortlisted for the LVMH Prize — during which his collection earned him a fan in Karl Lagerfeld — resulting in an invitation to show at Paris Fashion Week in February 2015.

El-Nayal’s fall 2016 collection centered around one of the most recognizable elements of Elizabethan dress: the ruff. “I wanted to use ruffles in a modern way,” he said. “The collection is very much about how the ruffle can be used not just as a neck decoration, but also on sleeves, and it’s integral to how the garment works and how it’s constructed.” For fall, that meant decking out his collection’s signature piece — the white cotton shirt — with oversize, architectural silhouettes; decadent sleeves; bonded pleating and 16th-century smocking techniques. “When I approach the machine, I think, ‘OK, this machine might be able to do this technique, but how can I make it do something different that no one’s ever thought about?’ It’s making me arrive at some very interesting collections. It’s a little bit disrupting.”

The collection is available for pre-sale on Moda Operandi and will be stocked at Harvey Nichols Dubai. The steep prices — $1,300 to upward of $4,000 for a single garment — reflect the label’s craftsmanship, with each piece smocked by hand in England.

Meanwhile, El-Nayal is focused on designing his next lineup, while simultaneously working towards a Ph.D. from Manchester Metropolitan in Elizabethan fashion; his focus is on updating historical dress with modern technologies, such as 3-D printing. Queen Elizabeth I is his be-all, end-all muse, the designer allowed. “If she were alive today, she would be wearing my pieces. I’m 100% certain of that,” he said. “She was so powerful and she challenged conventions, which is what I’m about.”