The Brooklyn-based Hunte has quietly designed his label for six seasons, and counts Beyoncé as a fan. 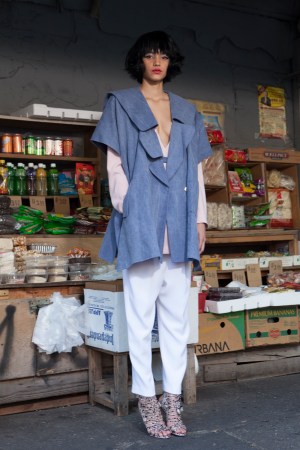 Romeo Hunte might not be a household name, but one only need to look to Beyoncé — who’s been spotted wearing a few of the designer’s pieces, including his popular buffalo plaid shawl — as a testament to the designer’s cool factor. Laverne Cox, Keke Palmer, Zendaya and Hailey Baldwin are also fans.

Hunte — based in Brooklyn, N.Y., where he was born and raised — has quietly designed his namesake women’s label in New York for six seasons and recently introduced a small men’s capsule. During a preview of his most recent spring lineup, a collection loosely influenced by Manhattan’s Chinatown neighborhood, Hunte showed a range of inventive, oversize jackets; sexy minidresses, and relaxed, deconstructed suiting, all with touches of men’s and military tailoring. He cites men’s wear and Japanese design as his main influences, and he has a flair for colorblocking and mixed-media effects — as in a pair of patchwork culottes featuring cuts of leather, patterned jacquard and sheer silk chiffon.

The 29-year-old Hunte studied fashion design at the Fashion Institute of Technology before taking on a few magazine internships and stints in retail at Barneys New York and Saks Fifth Avenue. “That’s where I found my customer and the girl I wanted to design for,” he said of working in retail. “At the time, I was juggling school, editorial [internships] and going to work at Barneys…it was really intense. But it all paid off, because now I have an understanding of the editorial world, and also of the customer and how the customer shops. It’s good to have a strong point of view, but you have to remember that the stuff has to sell on the floor.”

As for selling, Hunte’s primary goal is to snag more stockists and amp up his brand recognition. His collection can currently be found on his e-commerce site and in boutiques such as Foravi, 3NY and Tictail in New York, though custom orders keep him quite busy. Whenever a celebrity wears one of his designs — the most recent example being the New York Giants player Victor Cruz, who wore a men’s shawl from Hunte’s upcoming fall 2016 collection during the recent Paris Men’s Fashion Week — Hunte said his site gets a significant bump in traffic. The brand ranges from $350 up to $1,400 for outerwear.

For his fall 2016 women’s collection, which he plans to show by appointment, Hunte said he’s channeling a Western vibe, incorporating more denim and leather, as well as velvet, calfskin and pinstriped wool. Season to season, Hunte’s most consistent source of inspiration is his mother. “I used to take her clothes and cut them apart,” he said. “I think that’s where I get my love for mixed media. I would take her jeans and add leather to the bottoms. She looks at my clothes now and she’s like, ‘Oh my God, you’re really doing it.’”