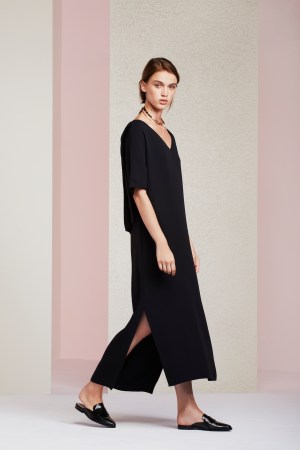 Head-to-toe black. It’s a de rigueur look for designers with a gothic flare — Ann Demeulemeester, Yohji Yamamoto and Rick Owens come to mind. But in the hands of Catherine Quin, black is merely a preferred backdrop with which to showcase luxurious fabrics and streamlined silhouettes, the tenets of her all-black-everything collection, now in its third season.

“The concept of the brand is a pared-back wardrobe,” Quin explained on a recent trip to New York. “It’s to simplify the daily ritual of getting dressed in the morning. It’s about paring back and having this wardrobe of essentials. It’s for the woman who travels and is busy…when you don’t want [to suffer from] this decision-fatigue of having 10 million things to choose from.”

The Los Angeles-based designer, who originally hails from Bermuda, was a practicing lawyer in London with an interest in fashion. On a whim, she took evening and weekend classes in fashion design at Central Saint Martins, then restarted her life in California with her first fashion job at Vena Cava. Not long after, she worked for a production agency that manufactured clothing for brands like Theory and Helmut Lang, during which she forged relationships with factory owners and started to dream up her own business plan. Quin launched her collection, made in Los Angeles at the same factory as Rodarte, last fall with a debut spring 2015 collection comprised of wardrobe staples: jumpsuits, suiting, tunics, blouses and an assortment of little black dresses. The collection was picked up as a U.S. exclusive at the Maryam Nassir Zadeh boutique in New York but will open up to more North American retailers next spring, and is also found in Blubird in Canada, Bloom & Branch in Japan, Alex Eagle in London and on its e-commerce site, catherinequin.com.

Quin’s self-described “purist commitment to black” will always ground each of her collections, but eventually, the designer will begin introducing “guest” colors: “It will be a different color each season, and everything will be available in two colorways,” she explained. “People want to buy a lot of the jumpsuits they adore in different colors.” She also launched her first handbag for spring 2016 — a croc-embossed calf-hair clutch — and next season she plans to introduce a shoulder bag. “I’ll design one necklace, one bracelet, one ring, and then eventually shoes: the perfect flats, the perfect heels. I want to expand into a lifestyle brand,” she said.

The collection, which ranges from $500 up to about $1,500, is hand-finished with subtle details like covered buttons and silk lining and piping. Quin, wearing one of her own chic jumpsuits, held up an elegant dress from her spring 2016 collection. “This can be worn as a caftan with sandals or with heels as a party dress,” she said. “An older woman can wear it as a jacket. You can put your own personality into it. It’s why everything is black — it’s meant to be so versatile.”