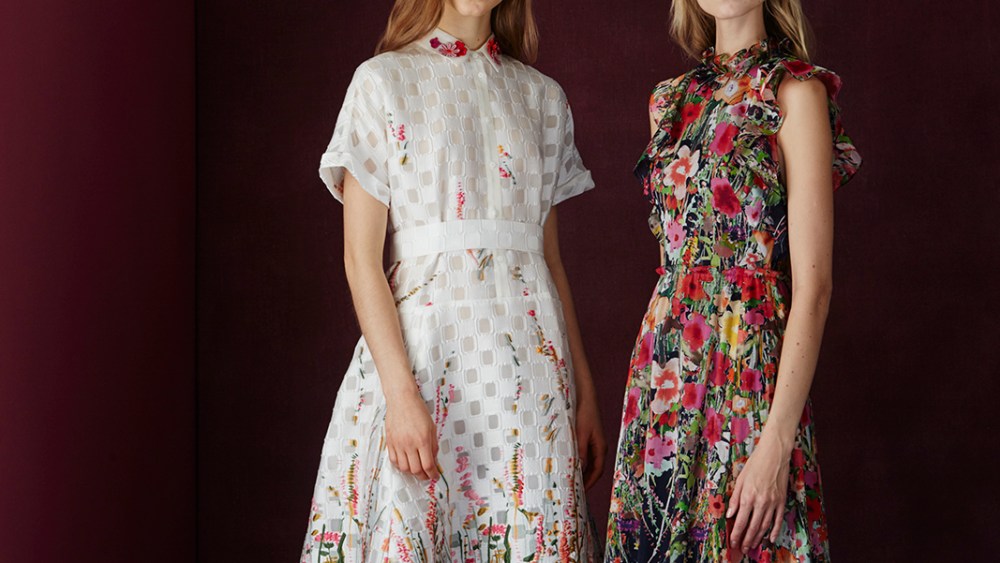 On Planet Fashion, pre-fall is many things.

It’s the longest-running season, opening to buyers and press in November and wrapping up on the heels of spring couture in January. It’s undeniably one of the most commercially important seasons with merchandise sitting on the sales floor for up to six months. It’s also increasingly difficult to define, as designers take broad interpretations of what exactly “pre-fall” means clothes-wise. The moniker alludes to autumn, but the deliveries hit stores at the beginning of summer. Designers present everything from fur coats to cotton eyelet dresses.

It can confuse. So much so that in December of 2013, while presenting his pre-fall 2014 collection, Michael Kors rejected the “pre-fall” terminology altogether, telling WWD, “We banished the phrase pre-fall. Considering that in September it’s still warm, ‘pre-something’ that doesn’t actually happen until November makes no sense to me. It’s trans-season.”

More recently at Diane von Furstenberg, chief creative director Jonathan Saunders declared that as of pre-fall 2017 the brand will refer to the season simply “summer” — a name that more accurately reflects the timing of the delivery — with clothes to match.

Okay, so pre-fall is a silly name. Moving on. The more pressing issue for many designers is figuring out the wants and needs of their customers. As summer inches near, are shoppers on the hunt for easy, breezy pieces they can wear right away? Or are they taking the long view of their wardrobes, stocking up on knits and coats to save for fall?

It’s a question that continues to puzzle as shopping habits ebb and flow, and the answer, after surveying many designers on how to clarify pre-fall, seems to be that there isn’t a one-size-fits-all approach.

“I think it’s going to be different for every designer,” said Christian Siriano, who maintains steady clientele in the Middle East and American South. “For us, it’s based on where our largest market is spending money and what type of climate they live in. Where most of our customers live, it’s warm most of the year. So even though I love a chic coat, I could never fill a collection with them.”

Prioritizing clothes that match the season in which they’re shipped hasn’t always been top of mind. Take Lela Rose, who launched pre-fall collection back in 2013. “When we originally started doing pre-fall, we designed it as literally pre-fall — having weights that were transitional and taking you into the fall season,” she said. “Now, we have completely transformed that delivery.”

Rose’s pre-fall collections currently include skirts and shirtdresses in cotton and other lightweight fabrics that are meant for function in the summer months. “We ship a little earlier than other brands — in April and May — so, we really have figured out that we need to be offering summer weights,” she said, noting that summer doesn’t always mean vacation. “Our customer is so event-focused with an entertaining lifestyle — she’s going to baby showers, graduations, weddings…It’s not beachy-casual. It’s more about: What do you want to wear to work in the summer while living in New York City, or in the South when you’re going out? What do you want to wear to a luncheon?”

Joseph Altuzarra used to approach pre-fall as a cold-weather season, too, but has shifted to a more diverse approach to accommodate his June ship date. “One of the main design challenges is addressing many different climates, end-uses and markets, while telling a cohesive story with a unique vision and look,” he said. “For us, it is really important to offer a variety of weights and styles to satisfy both a customer looking for a summer outfit in July that they can transition into fall, as well as someone buying a coat or knit that they can wear through the colder months.”

Sachin and Babi Ahluwalia of contemporary label Sachin & Babi have also fine-tuned their strategy to the weather, with their latest pre-fall lineup offering day and eveningwear looks in softer fabrics such as silk georgette and mikado. “Based on feedback from our brick-and-mortar retailers, we completely stopped producing outerwear for pre-fall as it is not being purchased,” Babi said.

“Pre-fall is our most challenging season because it is the season where domestic needs and international needs are the most disparate,” added Sachin, noting that the brand’s international clients are looking for true fall pieces, while domestic retailers, particularly in the south, are looking for more summer-appropriate styles.

Sean Monahan, who founded and co-designs Sea with Monica Paolini, admitted that striking the right balance in their offering can be tricky. The brand continues to include a few transitional knits and jackets in its pre-fall collections, but during a walk-through of Sea’s latest lineup, he wondered aloud if the season should be repositioned as a strictly summer offering, since buy-now-wear-now looks tend to have a higher sell-through. Case in point: Net-a-porter asked Monahan and Paolini to design a separate “high summer” collection, which delivers at the end of April, two weeks before Sea’s pre-fall delivery.

Jane Siskin of Cinq à Sept was on the same page. “The business has changed so much; the customer buys what she needs when she needs it,” she said. “From a practical standpoint, pre-fall delivers during the high summer months, so clothes that can be worn ‘now,’ bare with sandals, or worn ‘later,’ with tights and boots, tend to work best.”

Prabal Gurung put it this way: pre-fall is the one collection that “has nearly every seasonal demand.” He pointed out the delivery dates, the collection’s in-store shelf life and the fact that climates are regional. Catering to a global audience requires variety. “I do love designing pre-fall as it gives us the opportunity to focus on layered essentials like our luxurious cashmere knits handmade in Nepal, a shearling coat, our classic silk camisoles, easy dresses and suits with special details,” he said.

Giambattista Valli emphasized the importance of approaching pre-fall with a global, seasonless perspective. His latest pre-fall collection included both summery minidresses and lush mink furs. “The seasons now have to [encompass] everything,” said Valli. “I sell all around the world, and I have to be attentive to all the countries. It has to be something that will work in Asia when it’s warm; at the same time, it has to be something very wearable for Russia or America on the East and West Coasts. The most important thing to me is our woman — she’s very nomadic. She gets out a lot, all over the world, always with luggage.”

Genny’s creative director, Sara Cavazza Facchini, agreed with Valli. “One day you can be in the mountains, the next day on the beach or in a new city, and each workday can be filled with thousands of chores,” she said. “And you should always look fabulous…I find myself working with a wide range of fabrics with different functionalities.”

In additional to addressing transitional weather, pre-fall can also be a prelude to the next runway collection — and an opportunity to test what works and doesn’t work with clients. “Pre-fall lays the groundwork for many of the shapes and ideas that appear in the following season,” said Jonathan Simkhai. “This helps me gauge my woman’s reaction to particular silhouettes.” He does a lot of special occasion dressing, keeping in mind exactly what might be on his clients’ social calendars, whether that’s “the Veuve Clicquot Polo Classic or the boardroom.” Or the beach — Simkhai launched swim for pre-fall 2017.

If pre-fall presents a broad commercial opportunity, there are limits for small designers. Sally LaPointe, known for her edgy eveningwear, has started to incorporate relatively casual pieces into her pre-collections — sweatshirts trimmed in fur or rhinestones, for example — but remains keenly aware of her brand identity. “I have learned as a young designer that you cannot be everything to everyone,” she said. “You have to sort of find out what your core is, what you are really good at, and stick to it.”

Then there are the designers for whom pre-fall is a nonissue. Adam Selman eschews the season altogether — as a small company, producing another collection is simply not viable. But he also takes issue with churning out collections that don’t excite or entice.

“On an ethical note, there are just too many clothes out there,” Selman said. “We are producing too much instead of considering the outcome. So many designers are churning out ‘bestsellers’ and collections that have no point or value to the system; stores are buying them to keep up with the never-ending seasonal trends. It leads to the same clothes in all the stores with bad sell-throughs.”

Rather than designing pre-collections, Selman said he’d love to create smaller, exclusive capsules for select retailers. “The stores that are selling my collection understand what I am trying to do and have supported me through my main seasons,” he said.

Ian Griffiths, creative director of Max Mara, underscored the importance of having a narrative and a dream behind each collection. Otherwise, they’re just deliveries.

“When the idea of pre-fall emerged just over 10 years ago, it was wholly focused on satisfying specific requests from the marketplace; the overarching design concept and the creative structure of the collection was of secondary importance,” Griffiths said. “Today, the commercial landscape has shifted. In order to motivate consumers, there has to be an idea, a story, a dream behind the pre-collections, as much as there is behind the ‘main’ collections.”

It’s demanding work, but if you can keep up, it can pay off. “This delivery has become ever-more important for us,” said Ulla Johnson. “For our department store and online partners — namely Barneys and Net-a-porter —the pre-season is now a place they aim to place 60 to 70 percent of their fall buy, so there is much more pressure to deliver a lot of excitement and newness.”

Keeping up isn’t a problem for some. Sacai’s Chitose Abe’s pre-collections were born out of an off-shoot of her main collection called Sacai Luck, which was based on lingerie and loungewear. As Abe said, “It all happened naturally, and therefore, I don’t find it particularly challenging.”