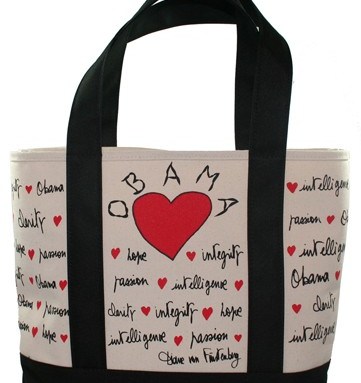 NEW YORK — President-elect Barack Obama continues to be a source of inspiration for designers.

With next week’s presidential inauguration shaping up to be one of the most anticipated national events in recent memory, more than 10 American designers have created official merchandise to support the festivities as part of the “Runway to Change” initiative.

The “Runway to Change” initiative launched during Obama’s campaign featured special merchandise by more than 25 designers to benefit the campaign. “It was a big success, and got a lot of positive feedback from designers and also the general public,” Presidential Inaugural Committee spokesman Brent Colburn told WWD. “Heading into the inauguration, we thought it would be a wonderful thing to incorporate the talent of some of these designers in the inaugural celebration. We reached out to them, and asked them to participate in this collection.”

Proceeds from the sale of the items will support the costs of the inauguration, which are expected to be in the same region as the $45 million 2005 inauguration.

“This is the most exciting political moment of my lifetime,” said Zac Posen.

Tory Burch added, “President-elect Obama is an incredibly inspirational leader. I am excited to see the direction he and his team will take our country in the coming years, and look forward to supporting them in every way I can.”

Among the pieces is a printed DVF natural cotton canvas tote for $70, featuring a heart, the word “Obama” and terms such as integrity, intelligence and passion in the designer’s script. Rachel Roy, meanwhile, created a gray T-shirt emblazoned with the slogan “I [heart] my president” for $45. “When designing the T-shirt for the inauguration I wanted the simple yet concise slogan — ‘I love my president’ — to convey the faith we have in Obama to bring about the change he represents,” she said.

“I was hoping this could be a communication tool that would connect people to inspire change,” Karan said. “It’s everyone’s responsibility to access their resources to call to action.”

The collection is available at the Presidential Inaugural Store at 625 E Street Northwest in Washington through Jan. 21. It will also be available at pic2009.inauguralcollectibles.com through February.