Designers Dress for Success in London

It's a big dress season in London, where a small crowd of designers are winning praise for styles that hark back to earlier decades. 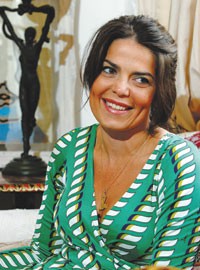 LONDON — It’s a big dress season here, with a small crowd of London-based designers winning praise for ultrafeminine styles that hark back to earlier decades — and to the shapes and materials of Diane von Furstenberg, Jean Muir and even traditional Nigerian costume.

“A lot of women are tired of wearing power suits during the week, and then slouching into jeans over the weekend,” said Marigay McKee, general merchandise director for fashion and beauty at Harrods. “Dresses offer a whole other option.” She said for fall, dresses are becoming more tailored and fitted, with designers celebrating the female form. Here, four names that are making their mark.

IT’S A WRAP
Brazilian-born Daniella Helayel always had trouble finding dresses that flattered her curvy figure — except in the secondhand shops and vintage markets of Manhattan.

“I always found loads of silk jersey dresses and thought they were the coolest thing ever. So why couldn’t I find them new?” she asked, sitting in her home studio near Paddington Station. So the Rio di Janeiro native, who had spent a career sourcing fabrics, finding factories and buying clothes and accessories for Brazilian companies, decided to start a label of her own. After a rocky first few seasons, Helayel is lighting up wardrobes around London with her bright jersey dresses with prints inspired by everything from Las Vegas casinos to medieval tapestries to Damien Hirst artwork.

Her label, Issa, which comes from the sound that Rio’s surfers make when they catch a great wave, now counts Madonna, Scarlett Johansson, Kylie Minogue, Jemima Khan and Jasmine Guinness among its fans. And it’s clear why: “We cut the dresses to enhance the chest, hide the hips and make the waist look small,” said Helayel. Issa’s wrap dresses aren’t really wraps; they’re made from a ballerina-like top that’s attached to a skirt, which improves the overall fit. “The whole point is to make comfortable clothes that enhance what’s beautiful and hide what’s not,” said Helayel, who sources and produces her all-silk dresses in China.

For fall, she’ll be doing long wrap dresses, and for spring 2006, she plans to work lace and crochet details into the styles. The dresses retail for about $540 and are sold at Harrods, Selfridges, Liberty, Browns and Matches in London and at Fred Segal and Calypso in the U.S. Issa expects to do $1.8 million in sales this year.

“I love finding new prints, and new shapes, and wondering how we can make it all better than last season,” she said.

MULTICULTURAL CLUB
Since last year, Duro Olowu has been quietly wooing the fashion crowd with his one-style-fits-all silk and georgette printed dresses. The dresses, with their Empire waists, full sleeves and contrasting, printed trim, flatter nearly every figure, and take their inspiration from traditional Nigerian costumes. “The dress reveals, but it doesn’t reveal. It’s for women to feel confident, joyful and sensual about themselves,” said Olowu.

The dresses are sold here at Browns, A la Mode and Harrods, and in the U.S. at Barneys New York, Kirna Zabete and Ikram. The georgette and silk dresses retail for $900 and the all-silk ones, for $1,600. Olowu, who declined to give a volume projection, also has a by-appointment-only store on the Portobello Road.

Olowu, who is half Jamaican and half Nigerian, clearly gets a buzz from sourcing the vintage fabrics for the bodices and trim on his designs. “Some of those georgettes are 20 years old,” said Olowu, who finds the fabrics in antique shops in places like Lyon and Marseilles in France and in New York.

“I love limited-edition fabrics, knowing that once 30 dresses are made with one fabric — that’s it! Everything has a life span.” For future collections, Olowu will be working with textile designers to come up with his own fabric designs. For fall, he’s designed a new style — a fluid, belted shirtdress in printed silk satin with a ruffle at the hem. He’s also done a silk shirt with a cravat and a swing coat with contrast piping.

“Think about it: Every culture has some version of a dress. I grew up surrounded by women in dresses, and that shaped my perception of how the body should move in a dress. And, at the end of the day, you can’t really go wrong with one.”

JERSEY JENNY
It may look as if Jenny Dyer has made a big leap — from designing film sets to making jersey dresses — but she sees things differently. “Whether you’re creating a film set, a piece of furniture or a dress, design is design,” said Dyer from her sunny garden studio near Westbourne Grove. Dyer has been designing for three seasons, but it didn’t take long for her jersey dresses, with their retro feel and bold colors, to catch on. Clients include Jemima Khan, Jacquetta Wheeler and actress Jane Krakowski.

Dyer’s small collection of dresses includes Thirties-inspired V-necks with covered buttons, cuffs and contrast stitching; belted shirtdresses, and sexy styles with cutouts in front and back. The collection is jersey-led; the mostly rayon and silk fabric comes from Italy’s iconic Marioboselli Jersey mill. Her projection for 2005 sales is $905,000. She said her goal, other than running her own business, was to fill a gap in the market. “I’m a huge fan of Diane von Furstenberg, but wanted to find an alternative to the wrap dress,” said Dyer, who also counts the late British designer Jean Muir among her inspirations.

The dresses, which range from about $400 to $1,000, currently sell in London at Selfridges and Browns and will begin selling in September in New York at the soon-to-open boutique Dialogue in the Meatpacking District. Going forward, Dyer plans to stick with dresses. “They’re what I’m passionate about, and they’ll always be easy to wear and jersey-led,” said Dyer, who packages each dress in a cardboard box with her Art Deco-inspired JD logo on the front. Among the next designs she plans to introduce is a Mexican dress with crochet and embroidery.

DRAMA QUEEN
The 24-year-old Aimee McWilliams is on a winning streak. After graduating from Central Saint Martins College of Art and Design with honors in 2003, she joined Rafael Lopez’s small team here, sourcing fabrics and designing his women’s collections. When McWilliams decided to go solo, she by chance met a businessman who offered her roughly $40,000 to start her own design house. McWilliams showed her first signature collection here in February 2004 and is now among the sponsored young designers at the Royal Academy during London Fashion Week. Dresses are — and will continue to be — a key component of her collections, which sell at Harrods and Two See in Covent Garden. When designing, she plays with both volume and strict lines. “But there’s nothing sculptural or hard about my shapes. I always want them to be luscious and flowing,” she said during a walk-through of the fall collection at The Dorchester hotel here. McWilliams’ dress designs include a Chinese number with cap sleeves in black, ribbed stretch silk; silk jersey styles with cutouts and velvet trim, and ones made from knitted lambswool. Her star piece for fall is a long, halter-neck chiffon dress in gunmetal. Prices range from $490 for a lambswool cableknit sweater dress to $2,450 for the gunmetal chiffon dress. Her annual sales volume is about $33,000. “Although I’m not exclusively a dress designer, I’ll be doing more and more of them in the coming seasons,” said McWilliams, who also makes tailored clothing and works with furs and leather.