Designers Dress the Ladies of ‘Oz’

The collaboration with the Tonner Doll Collection celebrates the film’s 75th anniversary and its initiative for Habitat for Humanity. 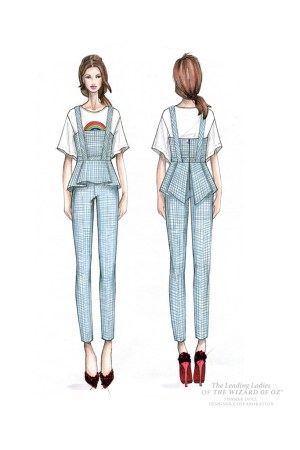 LOS ANGELES — Warner Bros. Consumer Products and “The Wizard of Oz” have teamed with Tonner Doll Collection and a host of fashion and costume designers on one-of-a-kind dolls dressed in various interpretations of Dorothy, Glinda and the Wicked Witch of the West.

To mark the classic film’s 75th anniversary and its “There’s No Place Like Home” initiative for Habitat for Humanity, Marc Jacobs, Donna Karan, Jenny Packham, Trina Turk, Chris Benz, BCBG, Hervé Leger, Carmen Marc Valvo and “Scandal” costume designer Lyn Paolo and the show’s star Kerry Washington have reimagined costumes for the 22-inch dolls. Their miniature couture creations will debut during New York Fashion Week at the Fashion Institute of Technology on Sept. 4, after which they will be auctioned on eBay to benefit Habitat for Humanity.

“To me, Dorothy is one of the few iconic heartland American girls in the movies, so having the opportunity to reenvision her style was exciting,” said Benz. “We were thinking about tornados and how when it’s windy in New York a piece of newspaper will just fly up in your face and how hilarious it would be to have that silhouette in blue gingham,” he said of his windswept design.

For Trina Turk, “Dorothy’s adventurous spirit represents a California girl at heart, so we updated her sweet gingham pinafore into a peplum jumpsuit layered over a ‘Somewhere Over the Rainbow’ T. The rainbow patch provides a pop of color to complement her ruby slippers.”

Designers who chose the Wicked Witch, like Packham, also took a nontraditional route. “Our witch is wicked in a contemporary, avant-garde way. We’ve used a print from one of my favorite collections to create a modern and fashionable witch,” she said of her design, which looks like it could be more suited for the Duchess of Cambridge than the broom-riding villain.

Paolo and Washington took another modern take, designing a ball gown with a flash of Olivia Pope white. “The gown was also an homage to the Met ball,” said Paolo.