Media and other industry members were wondering how Canadian fashion will survive in today’s tough economy. 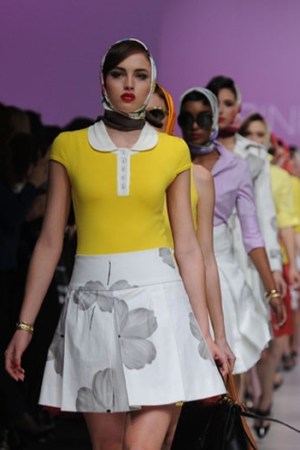 Even before the lights faded on the last designer show at L’Oréal Fashion Week in Toronto last month, the audience of buyers, media and other industry members were wondering how Canadian fashion will survive in today’s tough economy.

“If anything, Canadian designers are not holding back in the face of economic crisis, but taking the courageous stance to be more creative than ever,” said Robin Kay, president of the Fashion Design Council of Canada, the non-governmental organization that built this national event to promote Canada’s fashion industry.

According to Kay, up-and-comers like Carlie Wong were “infusing their collections with technology.” Today’s green movement also inspired designers like Evan Biddell and League of Lovers & Thieves to use environmentally friendly fabrics in their spring collections.

David Dixon, a designer of sleek, sophisticated looks, said he benefitted from fashion week: “The show has generated new business….We are opening new accounts and maintaining existing ones.”

Joeffer Caoc, another Canadian house, also got a boost in orders after fashion week. “The 2009 collection has been well received by retailers, despite the uncertain economy,” noted Caoc. “We’ve added new stores both in the U.S. and Canada, and are now enjoying our largest retail network to date.”

Still, the sagging economy is claiming some victims, like Toronto designer Arthur Mendonça, who is shuttering his business. And designers are coping with similar struggles in other international markets.

“Given today’s economy, the fashion industry faces the same challenges the world over. I don’t think Ontario would be any different than anywhere else,” said Sandra Pupatello, Ontario’s Minister of International Trade and Investment.

According to Statistics Canada, the nation’s apparel industry — the 10th largest manufacturing sector in the country — accounts for 1.2 percent of this nation’s gross domestic product.

“Ontario is known for the level of innovation it brings to design and that includes fashion,” she said, noting that L’Oréal Fashion Week is one of the largest such events in North America. “It plays a very important role in promoting the talent in this country.”

Kay noted that the event grew to six days from four. There were 40 runway shows at fashion week, featuring 70 designers. Organizers registered 20,000 visits during the week, including about 10,000 from industry people. Some 450 members of the media attended the week, according to a spokeswoman. The balance included VIPs, guests of the designers, sponsors and consumers, who bought out all 1,300 tickets available to them (at about $50 per day) for the events, which included runway shows, the new Studio runway space for emerging designers and the rest of the L’Oréal fashion tent showcases. In all, attendance was up 25 percent from last year, organizers said.

“Extremely positive” is how Kay described retailers’ response to the spring shows and the trends that emerged.

A new minimalism in silhouettes was also significant. From dresses to vests, jackets and cropped pants, “we saw simpler clothes that were more seasonless,” said Atkin.

For Sonya Ha, founder and president of Parade, Renata Morales’ artfully crafted eveningwear stole the show. Known for manipulating her fabrics into wearable art, Morales’ clientele is one that appreciates her couture-quality craftsmanship.

“I look at Renata’s clothes and ask why we don’t see that level in daywear. I can’t find it anywhere, not even in the U.S.,” says Ha.

Launching Parade in Toronto’s Kensington Market 30 years ago, Ha earned a reputation for selling outstanding vintagewear. Moving to Toronto’s hip Queen Street in the mid-Eighties, Ha introduced Canadian and American designers into her two stores, as well as Parade’s own label.

In 2007, Ha moved Parade to Toronto’s popular Danforth Avenue. She currently carries such designers as Zoran Dobric, Karamea, Snowflake and the store’s own brand.

“I am not a typical retailer,” said Ha, who attended L’Oréal Fashion Week for the first time this season. “I know what I want. I don’t let what’s on the runway dictate my buying. I saw some good things at the shows. But I also saw a lot of pretense. Things that tried to say ‘I’m cool’ with no substance to back it up. But again, while that element was there, it wasn’t the whole show.”

Like other small retailers, Ha’s take on Canadian consumers is shaped by certain realities.

“We’ve always had a handful of Canadian designers who have been viable on the international stage. But Canada is a different market,” said Ha. “There aren’t enough people in this country to support high-end fashion. Outside of Montreal, people aren’t prepared to spend that much on designer clothing.”

“Our customers come to us for the best of the best, regardless of price,” said Atkin. “Buying for spring came down to choosing brands that have a unique voice and vision. Value for the dollar was also key.”

Despite today’s tough climate, Atkin sees consumerism on the upswing, even as Canadian-made clothes are on a downswing in the world market.

“Canadian consumers are very savvy. They want today’s big brands, none of which come out of Canada,” said Atkin. “In the Fifties, Sixties and Seventies, the industry here was strong. That’s no longer the case. And when we do manufacture here, the prices are high. You can’t compete on the world stage that way.”

Atkin added, “The challenges Canadian designers face today are financial. We don’t have that big money machine here to partner with these designers, or the great merchandisers to help them understand the business of fashion and what drives collections to become successful.”

Looking ahead to 2009, Atkin, like Ha, is hopeful but realistic. “I’d like to say that great design will always be successful. That’s not always the case in [tough] economic times,” said Atkin. “Only those fortunate enough to pair with a big branding machine really make it.”

The next edition of Toronto L’Oréal Fashion Week will be held March 16 to 22.