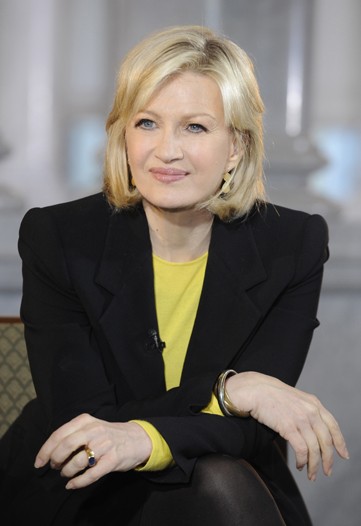 As Diane Sawyer ascends to anchor of ABC’s “World News” on Monday, going head-to-head with Katie Couric at “CBS Evening News” and Brian Williams at “NBC Nightly News,” there will be millions of eyes on them. Since this will be the first time two women will be sole anchors of two of the three major network news shows, there will be inevitable comparisons of their interview styles and gravitas — not to mention their clothing, hairstyles and accessories.

Granted, network evening news is a serious, albeit shrinking, business, and Sawyer and Couric (who broke ground as the first female solo anchor in 2006) have climbed to their roles because of their experience, smarts and popularity. But fashion watchers believe given the two newscasts reach more than 14 million viewers each night, the anchors’ appearances are bound to be scrutinized and, in some cases, emulated. And so Sawyer and Couric represent a great opportunity for designers and retailers.

“These anchor ladies’ personal style is always accessible glamour,” said Simon Doonan, creative director of Barneys New York. “They won’t show up wearing Balenciaga. They do have a big influence. A lot of women don’t have the courage to look like Daphne Guinness. Diane Sawyer is an achievable goal for them.”

For companies targeting Baby Boomers, this is a prime opportunity to showcase how their clothing looks on professional working women. Sawyer is 63, Couric is 52 and Williams is slightly younger at 50. Last year, the median age of nightly news viewers was 61.3 for all three evening newscasts, according to data from Magna Global USA, a media buying firm.

And advertisers may want to take a closer look at this demographic. Women ages 50 and older have more spending power and discretionary income than any other group in the U.S. and wield a net worth of $19 trillion, according to MassMutual’s Financial Group 2007 report. In fact, for the 12 months ending Oct. 31, women over 55 spent $19 billion on apparel, according to The NPD Group Inc.’s Consumer Tracking Service.

Whether the network news shows are the best vehicle to reach them is another story. Over the past two decades, the evening news programs have experienced declining viewership. According to the Pew Project for Excellence in Journalism’s “State of the News Media 2009,” the drop in the three commercial evenings’ newscasts slowed in 2008 to just 1 percent — or 300,000 viewers — compared with about a million lost annually over the last 20 years. An analysis of Nielsen Co. data by Pew showed that in 2008, a combined 22.8 million people watched the three leading network programs each night, and 13.1 million watched the networks’ morning news shows.

Even with the declining viewerships, designers and retailers are eager to dress Couric and Sawyer, who both declined to be interviewed for this story.

“I plan to dress them. This is the year of the woman,” said Elie Tahari. “Both Diane and Katie are wearing our clothes — quite often. We don’t send clothes to anybody. They buy them.

“I think these two women are confident, dress smartly, are stylish, graceful, elegant and modern,” he added. “It’s very good for business. [The broadcasts] go to everybody’s living room and women are looking at women — it’s stimulating for style and fashion. With men, they’re in a suit and tie, and it’s boring.”

Michael Kors, whose clothing has been worn by Sawyer, observed, “Now that Diane Sawyer is becoming an evening anchor, she and Katie Couric make women the majority on network evening news, not the minority. Just as we’ve seen politicians like Nancy Pelosi soften up their look, I think we will see a more relaxed yet polished feel become more prevalent with the new female majority.”

“Diane is an icon for me,” said Donna Karan, whose label was part of Sawyer’s on-air wardrobe when she was on ABC’s “Good Morning America.” “She was one of the first consistent voices in the forefront of news reporting. She always had a sense of style, elegance and sophistication. She represents a woman of style and power.”

Isaac Mizrahi observed, “I really do think that they’re going to influence fashion. I know every time I see Charlie Gibson and Tom Brokaw on TV I say to myself, ‘I have no good ties,’ or when I see George Stephanopoulos: ‘He has great lapels. Why do mine look so shoddy?’”

“I know Diane, in just who she is — she is influential. The minute you put her on the 6:30 news, she’ll influence fashion even if she’s wearing a black crewneck. I think that she has the most incredible instincts, more than any stylist could have for her. She has an inner knowledge of how to present herself,” said Mizrahi. He said Couric and Sawyer “are people who look put together and have a sense of propriety, which is not in fashion anymore. Now it’s fashionable to be over the top and have madcap style. I like that for once you get restraint from these girls, and it might help the cause.”

Retailers, too, are eager to get their merchandise on the backs of Sawyer and Couric.

“[Sawyer] embodies so many qualities of the Ann Taylor woman — smart, chic, passionate, confident. She’s a great role model with a fantastic sense of style,” said Lisa Axelson, senior vice president of design at Ann Taylor. “I personally would love to see her in one of our chic power suits with a feminine top that adds a pop of color. She looks so good in red. It’s great to see her join Katie Couric, another example of a female role model, in this high-profile position. We’d love to see these powerful women in our new collections as they both embody the chic, modern woman.”

Marc Gobé, president of Emotional Branding, suggests the fashion industry work with broadcasters to leverage the power of these women. However, he feels their conservative dressing isn’t good for fashion, especially in a time of crisis like the one the industry is in now. “We haven’t seen innovation from broadcasters for many years. It would add some pep to their business. More people would watch the news to see what the women were wearing, and it would be talked about in social media. They would tell their friends. ‘Did you see the dress she was wearing?’ Right now, it’s very conservative. The fashion industry has got to make its case.”

Since taking over the evening news from her role as co-host of NBC’s “Today” show, Couric has taken on a more serious demeanor, tailoring her look and hairstyle and making strides to lose her “America’s Sweetheart” and “perky” reputation. As Sawyer moves from “GMA” to “World News,” some observers believe she doesn’t have to become more conservative in her appearance, which has been described as refined and ladylike.

“People are looking for more individuality and expression; this can be an opportunity,” said Robert Burke, owner of Robert Burke Associates, a consulting firm. “I think the old, more dated approach was that, if someone were to be fashionable, it might compromise their credibility, but that’s not the case anymore. Now it’s one element of someone’s public persona and can help differentiate them.”

For years, women have taken fashion cues from what the morning TV show hosts are wearing, whether it be a particular color, skirt length or an open-toe shoe.

Kors noted Meredith Vieira, co-host of NBC’s “Today” show, wears his designs on air. “Everything from dresses and coats to sweaters and jackets. I think her relaxed yet polished look resonates with American women because the look is chic yet approachable,” he said.

Tahari said Vieira has worn many of his pieces on the show, including a herringbone jacket. And Sawyer has worn Tahari’s black leather pencil skirt, python printed skirt and printed trenchcoat on “GMA.”

Vieira, Sawyer and Couric’s styles are especially appealing to professional women over 35, said marketing experts. “I think those women are definitely iconic for Baby Boomers. They’re extremely well respected, and their values are well respected,” said Kim Vernon, president and chief executive officer of Vernon Co., a marketing and licensing firm. “The way they look is conservative, and that’s what most women are comfortable with.”

“When I was at Ellen Tracy, we dressed Diane Sawyer a lot,” he recalled. “The only thing good about the inauguration of George Bush was that Diane was wearing a red coat of mine from Ellen Tracy. Her stylist bought a lot.

“Katie wears more fashion than most women in evening news,” said Nolan. “When Katie was doing an interview, she wore a cropped-sleeve coat with long black gloves. This tells all the women in America with a cropped-sleeve jacket what to do. Katie has gotten much more modern and forward. Her hair got angled and more extreme. Her numbers aren’t great, but she looks really great.”

Still, there are people who believe fashion shouldn’t be a concern on the evening news shows.

Madonna Badger, founder of Badger & Partners, a New York ad agency, doesn’t feel people tune into the evening newscasts for fashion trends, but rather they will watch Sawyer because of who she is. “I think Diane Sawyer has always been a style icon. She’s a woman of a lot of firsts. It doesn’t strike me that women are really looking to news anchors for the latest styles, considering that hot fuchsia eye shadow at MAC is the best selling in the country,” said Badger.

Diane von Furstenberg also doesn’t think having two female news anchors will have much of an impact on the fashion world.