DALLAS — Eight designers have been picked to sell their work through the Dallas Fashion Incubator, a two-floor space across Main Street from the Neiman Marcus flagship that is intended to support and promote the fashion industry in... 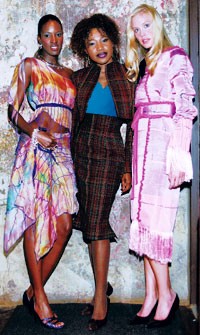 DALLAS — Eight designers have been picked to sell their work through the Dallas Fashion Incubator, a two-floor space across Main Street from the Neiman Marcus flagship that is intended to support and promote the fashion industry in Dallas.

The selected companies produce goods ranging from hand-knitted sportswear to hammered sterling jewelry, embroidered cotton slippers and relaxed silk charmeuse tops. The nonprofit Dallas Fashion Incubator plans to mentor other emerging designers with seminars and establish a database of fashion resources, such as cutters and sewers.

The project is the brainchild of Leslie Carpenter, a designer who two years ago became frustrated by the lack of support for new fashion businesses in Dallas. She put her own company on hold while she spearheaded the effort to establish the Incubator. The Incubator plans to name an executive director in two weeks and the outlet within a month. The designers will staff the store.

“This has really taken a new shape and is becoming a revitalization movement for Dallas fashion,” Carpenter said. “I see the Incubator as the sexy part that is attracting people to this whole process.”

Dozens of people and businesses have donated time and money to support the project. The downtown club Obar donated the party on Tuesday at which the eight designers were announced, and models and stylists worked for free to model fashions. The fete drew more than 200 guests from the Dallas fashion industry, including executives and sales representatives from the Dallas Market Center Co. and Fashion Industry Gallery.

The initiative got start-up funding from the Art Institute of Dallas and a local boutique, Elements. Each donated $10,000. The South Side on Lamar loft complex, just south of downtown, gave the Incubator free office space about six months ago, and a city community development grant came through for $80,000.

A six-member committee chose the eight designers that will participate. They include entrepreneurial designers who have been in business less than a year and have a few retail accounts as well as more experienced people who have been selling to private clients.

“This gives me visibility and access to the market,” said designer Georgina Estefania, who has textile management experience and has been producing knit patterns for magazines and custom knitwear for private clients for five years. “But the most important thing with the Incubator is people getting together to bring fashion back to Dallas and to create a Dallas style that is different from either coast or Europe. Dallas is in the middle of the U.S. and there are many things that can be incorporated into that, like Western and Latin influences.”