Several European lingerie designers will be breaking out of the boudoir this week with a customized luxury lingerie presentation in Paris called Showroom Lingerie Dessous. 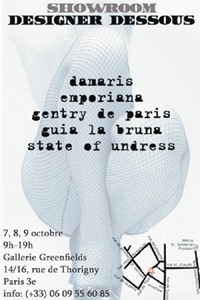 NEW YORK — Several European lingerie designers will be breaking out of the boudoir this week with a customized luxury lingerie presentation in Paris called Showroom Lingerie Dessous.

The three-day event begins Friday featuring five luxury brands: Gentry de Paris, Damaris, Emporiana, Guia la Brun and State of Undress. They will exhibit their spring collections at Galeries Greenfields located on the trendy Rue de Thorigny. The two-story venue, which also serves as a wholesaler and retailer of Irish crystal, will be dedicated exclusively to lingerie for the forum.

“We are the first and only [Paris] showroom dedicated exclusively to lingerie,” said Gentry Lane, director and designer of Gentry de Paris daywear, sleepwear, corsetry and bras. “We’ll be right around the corner from the gallery Thadeus Ropac and next to all of the prêt-à-porter showrooms. It’s an ideal location.”

Lingerie from each of the brands will be featured in “very boudoir-looking themes with lots of silk and feathers” in six windows, she said, noting the event will include informal modeling, champagne and canapés.

Lane said she and her “co-conspirators” came up with the idea of a private lingerie forum while exhibiting at the Lyon, Mode City trade show in September.

“We were all showing in our small stands at the Lyon show, which had a lower turnout this year, and we were discussing how the majority of our buyers were split over the fact that lingerie isn’t just lingerie anymore,” said Lane. “The Lyon and Paris [lingerie] salons are great for exposure, but not the best way to show the product. It made sense to work together to create buzz for our niche brands because lingerie showrooms are inherently attractive for buyers and market editors. Now they can see the five brands in one stop.”

Although Lane said she intends to continue showing at large trade shows, she also plans to expand the Showroom Lingerie Dessous concept to New York and London during fashion weeks next year.

Lane added the group of young designers will give a new twist to marketing and advertising Showroom Lingerie Dessous this week: a sidewalk stencil campaign.

“We’ll be all over the sidewalks of Paris, in front of Colette and the Carousel du Louvre,” Lane said. “That should get us some attention.”