The Fashion Council and Vogue teamed up in 1990 to throw a party at the Paramount Hotel in honor of Gianni Versace, Karl Lagerfeld and Christian Lacroix. 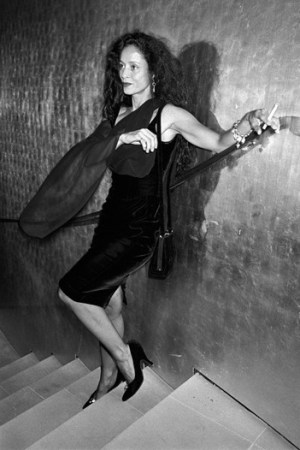 Two full runway shows at the Plaza hotel — featuring designs from nearly every major Parisian fashion house — weren’t enough to celebrate fall couture for the Fashion Council and Vogue in September of 1990. They teamed up to throw a party at Ian Schrager’s Paramount Hotel in honor of the Gang of Three — Gianni Versace, Karl Lagerfeld and Christian Lacroix — as well.

Schrager closed the lobby of his hotel and lit it with hundreds of tiny candles, casting a soft light on the glittering crowd. “Uh-oh, Isaac’s wearing his men’s wear,” Donna Karan yelled to Isaac Mizrahi, who was clad in a gold brocade sport coat.

“I didn’t know you could wear lamé to these things,” Marc Jacobs joked when he saw the coat.

Everyone was in good spirits at the party, but the runway shows hadn’t gone so smoothly. During the finale of the Chanel segment, Claudia Schiffer’s long white gown got caught on her heels, causing the supermodel to stumble down the runway. Even worse, Valentino had pulled out of the show at the last minute because the group had decided to feature only seven of his looks — compared with 17 from Lacroix, 15 from Versace and 19 from Chanel. But he backed out so late that organizers hadn’t had a chance to remove the list of his clothes from the program.