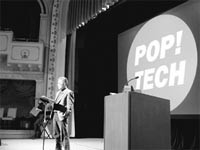 CAMDEN, Maine — There were lobster boats rocking tranquilly in the harbor and contemplative silence in the used bookstores here, yet an ideological “big bang” took place in this quaint seaside village last month.

Scientists, pundits and executives representing some of the world’s elite institutions crammed into the 500-seat Camden Opera House, the biggest venue in town, to discuss humanity’s future from here to eternity.

What will life be like when we can rewrite our genetic code, vastly extend our life expectancy, rocket far into the solar system and descend 4 miles down to the Mariana Trench, the deepest part of the ocean?

Perhaps most importantly, as we seize control of our evolutionary future, how will we shred and rework everyday culture?

Those were the esoteric questions — and the answers, rising at times like helium into the stratosphere of science fiction, were both frightening and exhilarating.

It was all part and parcel of PopTech, an annual futurist conference, which ran Oct. 16 to 19 and explored how technology continues to transform society.

In a reversal of traditional conferences, executives from Coca-Cola, Microsoft, GE, Sun Microsystems, Mattel, IBM, Google and Nike were not at the podium, but sitting in the audience.

Executives such as AOL founder Steve Case attended, taking in talks that ranged from a new paradigm for copyrights, to the rise of Weblogs, to a critique of architectural sprawl’s effects on the human psyche.

What emerged most strongly from the three days is that the human body — not the galaxy or cyberspace — is the new frontier. As we reinvent our bodies and minds, expect the world to be reinvented alongside, said presenters.

“We are going to see a sea change behind a tsunami of genetic information,” predicted Greg Stock, a professor at UCLA’s School of Public Health and author of “Redesigning Humans.” “It will change the way we have children, the way we manage our emotions, the way we relate to the human life span.”

Viagra, Botox and in vitro fertilization are baby steps compared with what’s in store.

In the not-too-distant future, specialists will be able to combine the genetic materials of same-sex couples, allowing them to have biological children together, Stock said.

The “lines are blurring between need and desire, between natural and enhanced,” he continued. “To some, that blurring will always be the invasion of the nonhuman and to others it will be the greatest expression of our humanity.”

In scenarios that made cloning Dolly the sheep seem tame, scientists talked about the rise of nanotechnologies — processes that manipulate materials at a molecular level. They are being used to create everything from stain-resistant clothing to artificial kidneys.

“We are decorating polymers with stem cells,” said biomedical materials engineer Alan Goldstein, explaining how scientists are combining synthetic and genetic materials to create such things as bioactive glass that mimics bone tissue.

He implied more public awareness is needed to make sure this kind of exploration doesn’t run amok.

“All the scrutiny is on cloning. In the meantime, science has a blank check on nanotechnology,” he said. “No one is asking [the public’s] permission whether we should interface neural information on silica surfaces.”

Would an ability to swap our parts with synthetic, or lab-grown tissues, bring us closer to Buddha and views of reincarnation, wondered Juan Enriquez, director of the Harvard Business School Life Science Project, in his presentation “The Coming Biotech Century.”

Perhaps, or maybe humanity will be focused on the “here and now” on Earth as a main component of spiritualism, argued Andrew Zolli, a futurist and lead partner of think tank Z+Partners.

Proposing that civilization is entering an “axial age,” Zolli traced the evolution of thinking about life and death from ancient tomb-building cultures who envisioned a “land of the dead,” which mirrored this world, to the rise of monotheism focused on “heaven, above.”

The future shift is toward a preoccupation with “here and now,” Zolli asserted. People will be more concerned with shaping life on Earth — the environment, our bodies and other life forms.

Reality as the ultimate new spiritualism is certainly a tempting idea, he offered, considering the amount of people watching “Joe Millionaire” versus attending regular religious services.

Zolli expects society to polarize in its reaction to technology with “forms of fundamentalism emerging alongside exuberant embrace of the new.”

By fundamentalism, he means embracing the “old ways” or “natural” versus “unnatural” technology. The desire among some for organic foods and resistance to genetically modified crops is one example of the kind of fundamentalism Zolli anticipates being present in the “axial age.”

Robert Throckmorton, a trainer with Richmond, Va.-based consultant Play, said, “Looking at a concept like an axial age and seeing where priorities and preferences are shifting is very helpful to us.” The firm categorizes ideas for clients — including Target, Sara Lee, General Mills and others — into “incremental, breakthrough and transformational.” He was at PopTech to try to ferret out the latter, and understand ways large corporations could be ahead of shifts affecting mass audiences.

Other presentations, while not overtly revolutionary, had immediate relevance.

Cindy Romaine, who as the director of Nike’s design library travels around soaking in the zeitgeist, raved about digital artist Golan Levin’s presentation. Levin, a graduate of MIT’s Media Laboratory, is known for interactive, digital performance art pieces. He created tele-symphony, a 2001 piece in which he reprogrammed audience members’ cell phones with new ring tones and arranged them in specific seating patterns. As the phones rang in a rapid, choreographed pattern, each “playing” audience member lit up and then went dark as the sound leapt elsewhere, leading to a symphony as visual as it was auditory. The result, a short clip of which he played for PopTech, was a surprisingly beautiful, shimmering music piece.

Levin wasn’t the only presenter who intrigued Romaine. She also planned to ask Virginia Postrel, author of the recently released book, “The Substance of Style,” to speak to Nike’s design team. During her talk, Postrel spoke humorously about her days cataloguing toilet brushes at Target, Bed Bath & Beyond and other mass marketers as part of her theory that the U.S. is entering an “age of aesthetics.” A demand for design is affecting even the most humble objects, she contends.

“Even Wal-Mart had seven colors of Rubbermaid toilet brushes,” she said in an interview after her presentation. “Consumers are wanting more choice and more intention in design. A few years ago, toilet brushes were commonly sold without caddies. You’d just toss it under the sink.”

The desire for aesthetic expression springs from people’s longing to be singular in an anonymous world. It has affected everything from Starbucks (the current template for how to sell an aesthetically pleasing, multisensory experience at a high margin, according to Postrel) to home decorating.

“There has been an enormous interest in paint colors,” she said. “We’ve had a lot of very generic houses built in developments. People are seeing those beige walls as a blank canvas on which to splash their personality.”

Postrel showed a slide of GE’s jewel-toned plastic Nalgene drinking bottles, enormously popular on college campuses, as an example of the new aestheticism at work.

There’s no better example, of course, than Target Stores, a $37 billion entity revolving around the presumption that appearance matters. That’s a significant shift from the deep-seated, Puritanical notion that “the cultural aesthetics are frivolous, that they are a form of false value,” Postrel noted.

As well, Wal-Mart’s dominant ability to bring reasonable quality, low-cost products to market means that design is often the only competitive ground left. Although Wal-Mart stores are notably devoid of aesthetic appeal, Postrel argues that the discounter’s everyday low prices are actually fueling the phenomenon.

“People are going to Wal-Mart to buy their aesthetic tools,” said Postrel. “Teens get the things to decorate their rooms at Wal-Mart.”

She tracked Christmas string lights, for example, finding out that in unadjusted dollars the price of a 10-foot string of lights in the Seventies is comparable to a 100-foot strand of lights sold at the retailer today.

Which fits another of Postrel’s points: The rise of aesthetics doesn’t mean “good taste” is on the upswing.

James Kunstler, author of “The Geography of Nowhere,” didn’t let Wal-Mart and its peers off so easily. He took a darker look at the rise of commercial sprawl isolated from traditional “Main Street.”

There is an “asteroid belt of architectural garbage” on the outskirts of most U.S. cities, he said, adding those clogged, commercial strips are “entropy made visible” and that they cause depression and anxiety.

“A land full of places not worth caring about will be a nation and a way of life not worth defending,” he extrapolated.

He touted instead New Urbanist rhetoric that calls for denser, mixed-use developments that are “human scaled” instead of massive. His plans call for new development to fill in the “parking lot lagoons” of big box centers, leaving open space at the boundaries.

There are some signs developers are taking a modified view of New Urbanism to heart — and getting favorable reaction from the marketplace.

In Dallas, where Postrel lives, developers razed a string of dilapidated city blocks and created West Village, a mixed residential, retail and entertainment enclave that tries for the cultural intimacy of a long-established neighborhood.

“The residents of West Village enjoy being connected: connected to the arts; to the cultural and entertainment districts of the city; to the train and the trolley, connected with the people in the community and the urban village they call home,” reads the West Village Web site.

Although less than two years old, the building facades vary architecturally, giving the semblance of a place that grew up organically over time, Postrel said. Retail ranges from mall staples like Ann Taylor to limited edition and one-off concepts like The Paul Frank Store and Q Shirtmakers. The nicer restaurants are regional concepts, rather than national chains.

“They had an aesthetic vision of the city and it has flourished,” Postrel said.