As more and more brides look to hold their weddings in such far-flung locales as Half Moon Montego Bay in Jamaica, and Cabo San Lucas, Mexico, the biggest question they face is: How do I pack my dress, which is yards of lace and silk? 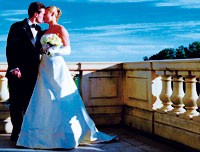 As more and more brides look to hold their weddings in such far-flung locales as Half Moon Montego Bay in Jamaica, and Cabo San Lucas, Mexico, the biggest question they face is: How do I pack my dress, which is yards of lace and silk?

The answer increasingly is that they don’t. Instead, bridal designers are seeing a surge in demand for lighter-weight gowns that are less fussy and for dresses that can as easily be worn for a cocktail party or a wedding on the beach.

Some say the travel industry jump-started the trend after Sept. 11, 2001, when it was desperate to get Americans back in the friendly skies. Others say the start dates from 1996, when the late Carolyn Bessette and John F. Kennedy Jr. tied the knot on Cumberland Island off the coast of Georgia. Her Narciso Rodriguez-designed slipdress reset the standards for wedding gowns.

Wedding planner Marci Blum said, “People are trying to create one-of-a-kind experiences. That is very hard to do with a one-night event, especially in New York where people are jaded. Taking them to the Amalfi Coast or to Turks & Caicos is not only a bonding experience but a lasting memory.”

Interest in destination weddings at La Samanna in St. Maarten has been so strong that the resort has hired a full-time wedding planner. The Half Moon Montego Bay, a resort in Jamaica, has seen a 100 percent jump in bookings for destination weddings. But out-of-town “I do’s” aren’t limited to the surf and sand.

At Keswick Hall, a 48-room estate on 600 acres in Charlottesville, Va., wedding parties can book all or some of the property. As part of a new “Expressly Yours” program, a couple can present the country estate as their own manor house complete with personal photographs throughout the public rooms, bridal teas in the drawing room and bachelor parties in the snooker room.

Ursula Hegewisch, designer of Wearkstatt, a bridal firm here, said, “People automatically think barefoot on the beach. But destination weddings can be very grand weddings — a villa in Tuscany or a beautiful home in San Miguel.

“Destination is definitely a trend that is gaining momentum. There’s a tremendous amount of planning that is taken off your hands because a destination wedding is not as large as one would be in your hometown. It also keeps the costs more contained by combining the wedding and the honeymoon. People also enjoy being able to spend more time with their guests.”

Many brides aren’t dressing down for the occasion and are willing to spend $6,000 to $10,000 on a dress, Hegewisch said. Three bestsellers at Wearkstatt are Carina, a strapless silk mikado A-line gown at $2,600, Stowe, a silk and linen strapless Empire gown at $2,800 and Sandra, a variation of the Carina with a neckline at $2,900. The third dress was added this year due to the success of the Sandra.

“The trick as a designer is to remember that a dress that looks appropriate at a wedding at the St. Regis or in a big church is going to look a little silly at sunset on the beach in Hawaii,” Hegewisch said.

On occasion, Blum has had to buy a first-class airline ticket for a client’s wedding gown. But for the most part, women are opting for easy-to-pack dresses, such as an organza slip dress, to avoid the added task of having to hunt down a good seamstress overseas, she said.

Padma Lakshmi and Salman Rushdie, and Kyra Sedgewick and Kevin Bacon are among the couples Blum has helped over the years. Having done consultant work with Sandals and Disney Weddings, Blum said she thinks the destination trend has legs. “It’s a way of having a very lavish wedding at much less the cost, if necessary,” she said.

J. Crew launched a bridal collection but the catalogue doesn’t trumpet it as such. The copy in this month’s edition reads, “So whether you’re walking down the aisle as bride, bridesmaid, or guest, your entrance will always be memorable. A duchess satin A-line skirt could easily double as daywear.

Many of the styles are geared for destination-bound brides. Jenna Lyons, vice president of design, noted that many of the styles can be paired with flip-flops for a beach wedding or put with pearls and kitten heels for one in the city.

J. Crew’s bridal dresses are sold online and through its catalogues. Employees at the company’s Lynchburg, Va., call center are advised to assist members of the bridal party. In addition to suiting them up, they suggest potential wedding gifts and honeymoon attire.

“We also try to give them something they can wear again to a cocktail party or a garden party. Lavender tafetta doesn’t go too far,” Lyons said.

Reem Acra said destination brides account for 50 percent of her bridal business. “I think about it when I’m designing, for sure. They want packable, easy-to-handle dresses that are easy on the eyes. Destination makes you think it’s going to be fun — it’s going to be a party.”

She also has to consider the price of the dress, since brides often splurge to hold their wedding overseas. Unlike some of her competitors, Acra said her destination customers are looking to spend about $4,000 or lower. “It can’t be too expensive, but it’s not necessarily a dress they will wear again,” Acra said.

“The bridal industry is becoming all about fashion. That’s partly why destination weddings are becoming more important. That’s pushing designers in the bridal industry to be more upscale,” she said. “All of a sudden there’s more of a fashion statement. Brides want to be more innovative. They’re also more competitive and want to do things in a unique way. Having a destination wedding is one way to do that.”

Designer Angel Sanchez said he is building a loyal following for his destination dresses, which now account for 70 percent of his bridal sales. That is a 30 percent increase compared with a year ago and the momentum is expected to keep going.

“Couples are marrying later in life and therefore are more sophisticated and have a sense of what they want in a wedding. More mature brides and grooms have less of a connection to their hometown, and friends who are spread out across the country and even the world. Why not get married in a place that is exciting for the guests to visit?”

For the most part, Sanchez’s customers are looking for “soft, sexy, and very simple” dresses. “I have always worked with ethereal fabrics — not big crinolines — and approached designing wedding dresses from a fashion perspective rather than a traditional one. I have always designed with a certain style of dress that perfectly suits a destination wedding,” Sanchez said. “The woman who chooses a destination wedding is one who has an adventurous spirit and is not bound by traditional rules. The dress she chooses reflects this. The dresses are completely different, too. A destination wedding dress is easier to wear. I imagine it to have far less beading than a traditional dress, with a lot more emphasis on layers of soft fabric.”

Vera Wang said she has always designed destination-appropriate dresses but has increased the offerings for spring due to increased demand. Destination dresses have more of an eveningwear feel, she noted.

Comparing the destination business to her traditional bridal business, Wang said, “It’s never going to be the other thing, but it is a big thing.”

But that doesn’t mean brides are scrimping on their dresses. Unlike Acra, Barge said they tend to buy smaller, straighter or A-line styles that can be thrown in their suitcases but not necessarily lower-priced ones. Destination dresses comprise 30 percent of Barge’s $3 million annual business, she said.

“From here on, it’s going to be an important segment of our collection for at least the next three to five years. If you don’t address it in some way, you’re missing out,” Barge said.

Joseph Murphy, president of JLM Couture, the maker of the Lazaro, Alvina Valenta and Jim Hjelm labels, expects the interest in destination weddings to wane once the economy bounces back.

“The job market has not been strong. Rather than spend as much money as they previously would to go away, brides are having their ceremony, reception and honeymoon for the price of a wedding,” Murphy said.

Jeff Diller, general manager of Monique Lhuillier’s Beverly Hills store, said the West Coast lends itself to destination weddings, with Santa Monica and Carmel, Calif. and Cabo San Lucas, Mexico, some of the popular spots. He estimated that 20 to 25 percent of the company’s customers select simpler styles for out-of-town weddings,

“There’s always the bride who is going to want to go something out of the ordinary and there is always going to be the bride who wants a more traditional wedding dress,” Diller said. “We love doing destination. But when else can you wear a big ballgown?”