Destination New York: The Buzz is Back

Destination New York: In the past few seasons, New York has seen its momentum gather pace again, and it appears the buzz is back. 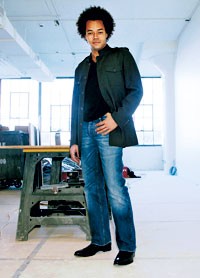 It’s not such a far-fetched concept, now that Karl Lagerfeld, having sold his trademarks to Tommy Hilfiger Corp., is hunting for design studios in the Meatpacking District and angling to bring his Lagerfeld Gallery collection to a Manhattan runway as soon as September.

“I like the idea of having a place in New York,” says the fast-talking, multitasking Parisian.

Lagerfeld isn’t the only one. A growing cadre of European designers not only find the fashion capital vibe-y and inspiring again, but view it as a land of opportunity to build their businesses.

“I always have good reasons to come to New York,” says Balenciaga designer Nicolas Ghesquière, who brought his electrifying brand of experimental fashion to New York Fashion Week in 2002 and 2003. “I definitely feel again something very positive and constructive [in New York]. You can really make a new proposition. It’s definitely a place that welcomes new ideas.”

Although the designer has returned to the Paris runways, he shot his spring Balenciaga campaign in Manhattan, and is setting up a showroom and office above the flagship he opened in 2003 in gallery-studded West Chelsea. He also says he relishes the idea of returning to New York’s runways.

Why shouldn’t he? In the past few seasons, New York has seen its momentum gather pace again. The weak dollar against the euro or the pound makes the city a favorable travel destination for Europeans, and young design talent — from Proenza Schouler to Tuleh, Zac Posen and Behnaz Sarafpour — has captured the attention of the global press. The New York shows have also become a playground for celebrities, both in the front row and on the runway. This Friday, Jennifer Lopez is following the footsteps of her ex-boyfriend, Sean “P. Diddy” Combs and staging a runway show. Beyoncé Knowles, who is launching The House of Deréon sportswear for fall, also has plans for a show during fashion week in September.

“There’s a new establishment that is rocking the fashion world here, and that hasn’t happened in a long time,” says Patrick Robinson, the New York designer who is presenting his first collection as creative director for Paco Rabanne in Paris this March. “New York has a young energy you don’t see in Milan.”

Donna Karan concurs: “It’s wonderful. The energy is there with the press, there is no question about it. I love the talent that’s coming out today and I pray that it’s going to hit the consumer, too.”

“There is more international awareness of what is going on in New York and the fact that there is a lot that’s new makes people more aware of American designers,” says Chelsea-based designer Sarafpour.

International designers agree New York offers a cost-effective way to publicize their brand and a practical selling advantage, given that orders can be secured almost a month before Paris and two weeks before Milan.

Brazilian Alexandre Herchcovitch, celebrating his 10th year in business, in the past unveiled his collection in his hometown of São Paulo, in London and Paris before switching to the New York runway last season. The commercial result of the latter move was dramatic: His distribution doubled to 30 stores from 15.

“Paris was a good experience for me, but the schedule is too crowded and there is a lot of competition,” he said in an interview. “Also, the European market is very closed. They don’t want to try new things. Here in New York, and in Japan, it’s the opposite. New York is the place that welcomed me the best.”

What’s more, Herchcovitch said he typically comes to New York six times a year to learn about “the way people work here in New York” and to draw inspiration from a city he describes as “very cosmopolitan.”

Young Brit designer Luella Bartley, who has been showing at New York Fashion Week since fall 2001, said the city is enormously inspiring.

“I want to show in a city with a vibrant youth culture, cultural and arts scene, a city with a real vibe,” she said. “Unfortunately, while London is an exciting city to be in — and design in — it doesn’t get the audience that New York gets. If you’re going to spend so much money on a show, you want to make sure the right people are going to see it.”

“My work is stimulated by so many different cultures. Before I went to New York, my collections were a blend of French eccentricity and English street. Now, they have a laid-back American elegance to them because of the influence of New York,” he said.

Mouret, who decamped from the London runways to New York’s three seasons ago, hasn’t looked back.

“We have been showing for three seasons now and our U.S. sales have risen from 3 percent to nearly 30 percent of total sales,” said Mouret. The designer has also just hired p.r. firms in New York and Los Angeles to get his clothing on the all-important red carpet.

A presence on the New York calendar for three years, London-based Matthew Williamson has seen his U.S. business develop to such a degree that he plans to open a Manhattan flagship in 2006.

“The American market is our second-largest market after the U.K., with 22 percent of our wholesale business,” said Joseph Velosa, Williamson’s business partner.

Velosa said press coverage was another reason for the move. “Editorially, it’s made a big difference for us. In London, the press tends to cover the new kids on the block, and by virtue of the fact that we’ve been around [for a while], the editorial would have dried up. Plus, the editors just don’t come to London anymore.”

Designers balk at one of the lingering stereotypes about New York Fashion Week: That it’s shamefully commercial, and not as creative or artsy as the European capitals.

Ghesquière, for one, said he has always found the American market very “reactive and sensitive.” For example, he said stores like Barneys New York and Kirna Zabête always took risks in buying the more experimental pieces from his collections.

He also praised the American fashion industry in general for blending creativity with reality.

Mouret agreed: “The city challenges you because it forces you to walk the line between creating clothing that is both aspirational and salable. New York gives you one chance. There is no point in going there to stage a nice show. In the end, you have to sell.”

American designers have kicked off the international fashion circuit since 1998, when Helmut Lang decided to steal Europe’s thunder, effectively moving New York’s position ahead of London, Milan and Paris.

Suzy Menkes, fashion editor of the International Herald Tribune, said she’s not been a fan of the change. “I actually find the shows now too early for all kinds of reasons,” she said. “I love New York for the larger vista of an incredible, vibrant city. But it’s not so vibrant when you’re standing in the snow in West Chelsea. When the shows are in February and September, it feels like they miss the heartbeat of New York.”

Also, the celebrity frenzy has become an overarching distraction and “I’m almost hoping we’re not going to have too much of it,” Menkes added.

Going forward, though, it looks as if snow — or sleet or hail — won’t stop the flow of international talent to New York’s runways.

“Fashion in New York has a major business aspect, a rational aspect that is something I like a lot about the New York fashion scene,” said Wolfgang Joop, who this season will be presenting his Wunderkind collection in Manhattan for the second time. “If I showed in Paris, I think I might drown in the entertainment aspect and would perhaps try too hard to compete with this entertainment. And Milan in February is possibly the hardest place to be in the world.”

“Time is such a luxury nowadays and we like the idea of taking the collection to our clients,” agreed Zowie Broach, who designs Boudicca with partner Brian Kirkby and who will be showing for the first time in New York this season. (See related story, this page.) “This is a natural journey for us.”