Four designers have won the opportunity to further their international growth plans for showing their collections during fashion week events. 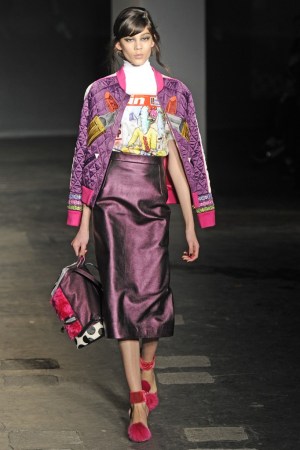 DHL, the logistics provider, and IMG Fashion have revealed the winners of the inaugural DHL Exported program.

Four designers, who are already established in their local markets, have won the opportunity to further their international growth plans for showing their collections during fashion week events. Italy’s Francesca Liberatore will present her collection at Mercedes-Benz Fashion Week in New York. Turkey’s Hakaan Yildirim of Hakaan will showcase his designs at London Fashion Week. Henry Holland’s House of Holland will present at Mercedes-Benz Fashion Week in Tokyo, and the duo Nicholas and Christopher Kunz of Nicholas K from the U.S. will show during Milan Fashion Week.

DHL Exported will sponsor a fully produced runway show for two seasons, along with covering the logistic costs of producing the collections. It will also ship the final looks to either New York, London, Milan or Tokyo.

“We were astonished by the amount of applications we received and even more so about the collections’ quality and designers’ creativity. Our juries in London, Milan, New York and Tokyo each had tough decisions to make and ultimately found some of the most talented designers out there. We’re confident to export their work with great success,” said Arjan Sissing, senior vice president, corporate brand marketing, Deutsche Post DHL.

Jarrad Clark, vice president, creative director of IMG Fashion and a panelist in each of the markets, added, “For us, it was about finding the right designers whose design aesthetic and businesses are ready to enter a new region. We needed to ensure they all have the proper infrastructure in place so that they are able to use their runway show and DHL’s logistic offering to its full potential.”

DHL and IMG Fashion received 150 applications from designers in 36 countries. Designers were asked to choose the market where their businesses’ objectives would benefit the most. For each show, a committee of regional experts reviewed the applications and chose the designer who displayed the most promise to succeed from the program.

The fashion shows will take place in September 2014 and February 2015 during New York, London and Milan fashion weeks and October 2014 and March 2015 during Tokyo Fashion Week.