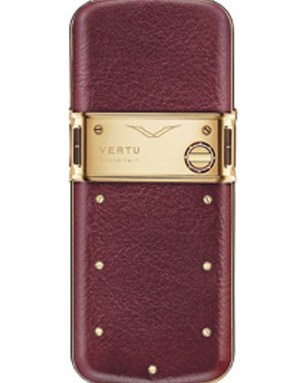 Cell phone companies are the latest sector calling on fashion designers. Label it a triumph of form over function — or part of the continuing push to extend their reach — but designers are increasingly being tapped to create their own phones.

The Apple iPhone is proof of the growing demand for stylish handsets from known brands, becoming one of the hottest sellers of the holiday season even as apparel sales — including those of designer labels — lagged. The mobile phone industry is the biggest consumer electronics market in the world, with more than one billion cell phones produced each year, and industry experts predict that by 2011 more than 200 million mobile phones a year will come from nontraditional brands, including fashion ones.

The linkup only makes sense. Hatching a new product every three months, the cell phone industry is one of the few consumer sectors that mirrors fashion’s breakneck turnaround cycles. And for designers, the numbers are nothing but attractive: Dolce & Gabbana’s limited edition MotoRAZR V3i cell phone for Motorola that retailed worldwide for about $550 and included a swinging gold pendant with the initials DG, three disco polyphonic ring tones and a voice that announces the name of the fashion house when the phone is switched on or off had sales of $256 million in 12 months, equivalent to more than 465,000 phones.

“The market is segmenting into those who want a phone with all of the latest technological whistles and bells and those who want to make a style statement,” said Chris Harris, global marketing director for Vertu, Nokia’s luxury mobile phone subsidiary. “It’s only just dawning on people to what extent the cell phone has become a ubiquitous status symbol.”

Lifestyle categories are also gaining prominence in the sector.

The firm produced Prada’s touch screen handset, which has sold around 500,000 units since its launch in the spring. “More than anything, it’s confirmed our positioning as an aspirational, high-end brand,” said Le Tourneur of the collaboration.

During the past few months, an expanding smorgasbord of fashion brands has unveiled cell phone ventures, including Giorgio Armani, Versus, Mandarina Duck, Ted Baker and Levi’s, which will launch its embossed-metal handset in the U.S. and Asian markets this spring. The LVMH Moët Hennessy Louis Vuitton-owned Swiss luxury timepiece giant Tag Heuer also revealed its entry into the arena — a first for a timepiece maker — with its release planned for the second quarter of 2008.

According to sources, Dior and Swarovski are also said to be preparing cell phones for 2008, along with two luxury jewelers whose names could not immediately be learned.

“It’s a market that lends itself to global brands, in particular those whose image fits with the [technological] universe,” commented Sylvie Ronchi, product manager for Alcatel’s Brand Design Lab, which has developed cell phones for Elle Magazine and Mandarina Duck. Ronchi cited Prada, with its ultradesign store interiors, and denim brands, with their plugged-in youth consumer base, as suitable examples.

There are, however, daunting research and development costs and certain design restrictions.

“A cell phone is basically a radio and metal, so elements such as precious stones can affect the way it performs. You need to be really innovative to solve that problem,” said Matt Lewis, an analyst for ARCchart, a British research and consulting company that specializes in the wireless communications sector. The firm will be hosting the Handset Fashion + Style congress at the RSA in London on April 23 to 24.

But with market studies showing consumers are now satiated with high-tech features such as Bluetooth, MP3 and camera functions and are looking for something more, fashion players are eyeing the cell phone, which is seen as an increasingly indispensable gadget and a viable route for brand extension.

The cell phone’s potential global reach also exceeds that of any brand’s core consumer base, in particular in view of emerging markets such as Russia, India and China, and increasingly wealthy ones such as the Middle East. As Shireen El Khatib, chief executive officer of the Dubai-based Al Tayer Insignia, pointed out at the WWD/DNR CEO Summit in October, one of the status symbols for male luxury consumers in the Middle East is the latest, most stylish mobile phone.

“For brands that are used to making 100 percent margins on certain items, there’s the opportunity to make a lot of money,” suggested ARCchart’s Lewis, referring to the high product volumes at play in the cell phone market.

While traditional cell phone manufacturers generate business via distribution deals with operators and not on margins from the actual phones, which on average represent just less than 10 percent, the per-device revenue for a phone branded by a global fashion label is potentially greater. “Just like a pair of jeans, consumers will not hesitate to pay top dollar for a premium product,” said Lewis, adding the arrival of Apple’s iPhone, which retails at $500, will pave the way for a new generation of premium phones that don’t come attached to a service provider contract. “The per-device revenue for a fashion phone is potentially greater.”

Since many fashion brands continue to be uncertain about the cell phone’s call, a growing number of “hand-holding” CDMs, or customized design managers, have emerged to help them by proposing made-to-measure, “mobile-on-demand” services, such as the firm ModeLabs.

“It’s [firms like these] that are providing the final nail in the coffin of techno-oriented manufacturers,” said Lewis, adding that traditional cell phone producers such as Alcatel and Sagem have had to turn to assisting third-party brands come to market in order to keep up with consumer demand.

“Today a number of luxury brands are interested but not any old how. It’s about reinventing the cell phone for it to become the next fashion accessory,” said ModeLabs’ Stéphane Bohbot, adding the role of his firm is to initiate brands to the world of cell phones “in the same way they might have entered the world of watches and perfume.”

It’s a process that now goes beyond cosmetic packaging codes. “Clients want cell phones to reflect the intrinsic DNA of the brand,” said Bohbot. For example, ModeLabs has been experimenting with phones that use ceramic and precious stones for one unnamed luxury brand.

“The finish has to have that ‘made in France’ touch,” he said.

Elsewhere, channeling style and function, ModeLabs has used embossed stainless steel for Levi’s first cell phone, which comes with an attachable chain belt. Consumers will also be able to log on to the Levi’s Web site to have their name engraved on the phone, which will retail for around $600.

“The phone is geared to the 15-to-24 age group, a group which has proved ready to pay for an emotional purchase,” said Bohbot. “It’s an important age group for us.”

“It’s about shaking off fuddy-duddy associations and transforming a phone into a glamorous fashion accessory,” echoed Alcatel’s Ronchi. Having developed Elle Magazine’s first cell phone in 2005, she foresees the day when consumers will be able to browse editorial content from a magazine’s branded cell phone.

Mandarina Duck’s phone “package,” meanwhile, comes with a charm that can be used to clip the phone to a bag. “It’s a new approach to the cell phone market that involves presenting whole packages, from user interfaces and content to marketing and advertising,” said Ronchi.

But even as phone manufacturers and operators increasingly clamor for fashion-branded phones, distribution channels for them other than traditional cell phone outlets remain limited. The U.S., dominated by operators and run under two separate wireless technology systems, GSM and CDMA, is proving particularly resistant to the idea of phones that aren’t subsidized by operators.

“The idea of buying a phone without a contract is alien to 99.9 percent of the American population,” asserted Vertu’s Harris, adding that many U.S. citizens haven’t even come into contact with a SIM card, which is often an embedded element of subsidized phones. “It’s a challenging market, but we’re starting to see a bit of movement,” he said.

“I have less faith in the U.S. market, which is a paradox, as it’s there where the branding is strongest,” echoed ModeLabs’ Bohbot. “But I believe that when we have the right brand with the right distribution channels, consumers will express themselves.”

For brands seeking counters in department stores, meanwhile, the lofty rent, compared with those of traditional distribution channels, often means having to bump up margins. “Brands then have to create added value to warrant the higher margins,” said Harris, adding that Vertu’s jewel-embellished phones range from $3,500 to $70,000.

Yet while the technical nature of phones may be off-putting for fashion retailers, some observers predict that contract-less phones may soon end up being as integral a part of fashion departments as sunglasses and other accessories.

“For now, the sector is positioning itself with the watch and jewelry departments but, who knows, in the future, phones could end up in the handbag department,” suggested ARCchart’s Lewis.

“Just look at the way Colette has positioned phones right at its entrance among the jewelry and beautiful design objects,” commented Sebastian Girard, head of marketing for Motorola. “Cell phones are clearly high on people’s shopping lists.”