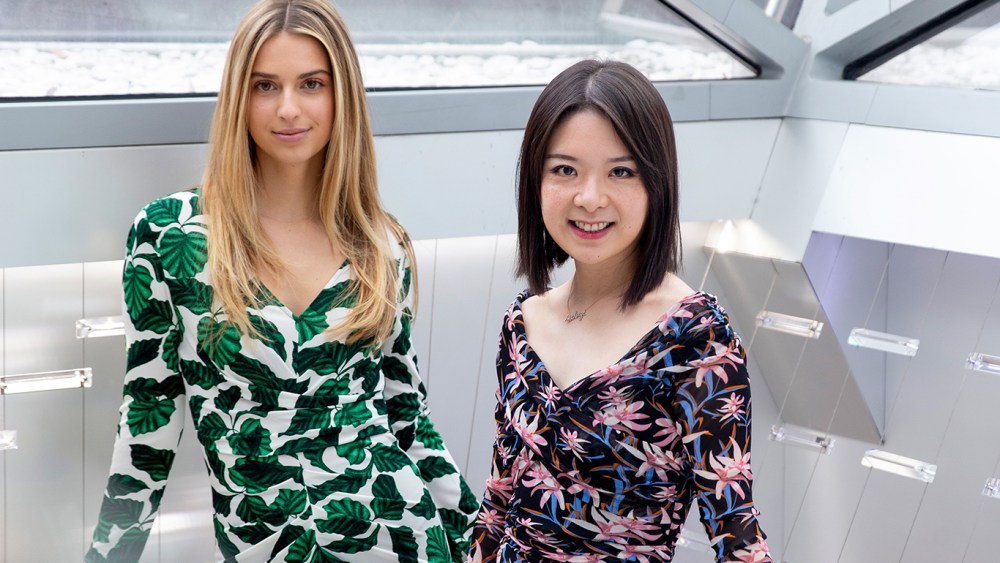 “You can be anyone and wear DVF,” Talita von Furstenberg, granddaughter of Diane von Furstenberg and now co-chairwoman of the company, said during a preview of the brand’s latest collection for summer and pre-fall.

Over the last two years of the pandemic, the company took the time to reset its business model, naming Gabby Hirata president and chief executive officer in January 2020 and Talita von Furstenberg co-chairwoman and downsizing the New York-based team, as well as reemerging under a joint venture with China-based Glamazon.

For the last 10 years, the label worked with Glamazon to handle its stores in China, run the brand’s Chinese business and its social media. A year ago, the company proposed an exclusive joint-venture partnership with the Chinese group.

“Now we really are a joint venture, they’re taking care of all our costs,” von Furstenberg noted. “All of the marking and initial design plan is here [in New York City], and then all of the fit samples, production — all supply chain is in China. The joint venture is dot-com, select wholesalers — those are the three separations. We all work together for the DVF ethos.“

The reasoning behind the partnership? To offer a more balanced price-point to meet its ongoing customers’, and hopefully a younger generation of customers’, wardrobe needs.

During WWD’s Apparel and Retail CEO Summit in November, Hirata noted that the brand had closed most of its stores, except for its New York Meatpacking District flagship, two locations in Belgium and its 47 China units. The same now applies to its wholesale business, with select partners such as Harrods, Nordstrom, Neiman Marcus, Net-a-porter, Harvey Nichols, Revolve, Stitch Fix, Rent the Runway, and more. The brand has also integrated Shopify into its direct-to-consumer e-commerce business.

“This is the first collection we’re proud of,” von Furstenberg said of summer and pre-fall. “The product is looking good and the joint venture is where we’re happy about. This is our first revival post-COVID-19. It’s a really big shift, we’re now operating and producing in China, so we did a big downsize to our headquarters in New York and added a way bigger headquarters in Beijing.”

“We want to continue with this new chapter of DVF with our 50 years,” von Furstenberg added of the brand’s upcoming milestone anniversary. “Honor our legacy of the past — the archival prints, the color bank, the styles — with a modern twist, where we can create a connection with a new, younger customer at a new price-point while integrating the brand DNA and ethos.”

Within their latest collection, the brand is aiming to target three different types of DVF women: the “mother-in-chief,” the CEO and the creative.

“The ‘creative’ is a new DVF woman, because we’ve always been geared more toward office wear for women. For confident, sexy on the go, but appropriate for the office and different occasions. Now we’re identifying more with the creatives — fits more for a casual setting with more comfortable, easy to wear fabrics and versatile prints that are more trendy and younger. Now that we’re offering more of a variety of price points, it’s attainable for all different women,” von Furstenberg explained.

A capsule of new DVF “The Originals,” consists of archival designs, prints and fabrications, which the brand will launch surrounding its 50th anniversary in 2023. These include the iconic silk jersey wrap dresses and signature styles from the ’70s, ’90s and beyond, including a singular Bobbie top and Finn pant in mosaic cloud ivory (which is set to launch earlier in May 2022).

“I think the glory and success of DVF in the 2000s was really what captured 30-year-olds. Now she’s 50, so we’re reconnecting to that 30-year-old who’s now aged,” Hirata explained.

To reach a younger age group (pinpointed as late twenties to early thirties), the brand will still offer its signature ideas and attitude, but with new colorways, fresh prints and most prominently, a lower price-point due to lighter new materials.

Texturized soft cotton was noted as a focus, as well as Viscose CDC, matte jersey and mesh for spring and pre-fall. These were used in youthful, reversible mesh printed dresses and tops or a myriad of day-to-night styles offering a range of soft volume, light ruffles, sleeve details, eyelet accents, and tie details with femininity at the forefront. An off-the-shoulder floral Ganesa midi dress is offered in printed nylon mesh for $358 for a younger audience, while an Abigail silk jersey wrap dress in the same print for $728 sits within the same collection for the brand’s ongoing, core clientele. Each print and colorway is applied to a variety of silhouettes and fabrications, offering a range of similar ideas for different body types and ages with dresses from $298 to $788, and all ready-to-wear sitting between $98 and $788.

Within May and June deliveries, the brand boasts colorful, true summer designs influenced by sunshine and water; in July, additional viscose knits and transitional layers are peppered in to carry through the pre-fall season. Throughout the collection, the garments uphold the brand’s feminine spirit and signature use of eye-catching motifs in silhouettes ranging from more casual daywear to dressier occasion-wear.

“People are dressing down now,” Hirata said, “How do we give her that casual feel with premium quality? But we’re never going to make hoodies…”

“Or jeans!” von Furstenberg chimed in. “We’re trying to integrate the DVF woman with more comfortable and easy, throw-on outfits.”

In addition to viscose and a water reduction system, which reduces usage by 80 percent for their print-heavy offering, Hirata, who has a background in product development, noted a push toward actively expanding sustainable efforts next year.

In other big news for the company, design is now handled by the smaller New York team while Talita von Furstenberg is “now the role of DVF,” as the brand’s founder and chairman Diane von Furstenberg takes a step back.

“Right now, I am the shadow, I am part of the archive — the living part of the archive, I advise and help them… I focus right now, very much time on organizing the archive and spirit of DVF… I help them set up systems, because I believe in systems; if you want to be a liberated woman, a woman in charge, you’ve got to be ready for anything, at any time and that is how we conceive the DVF wardrobe,” Diane von Furstenberg explained over the phone.

Much like her career trajectory, which began at a young age, learning the ins and outs of traditional print- and garment-making before launching her namesake label in the early ’70s, von Furstenberg is empowering the younger generation to carry on her brand legacy while providing the team with her tools and knowledge of timeless, female-empowering fashion to do so.

“Now, the company is in the hands of Gabby and Talita. It went back to the core product, and we’re polishing and polishing in order to do that… We have a bank of 300 wonderful signature colors, 15,000 prints, thousands and thousands of vintage — a huge archive and photographs,” she said, adding, “So now, the brand — at almost 50 years — is like having a start-up, with a huge, amazing archive with real values about women.”

“We don’t have a traditional creative director and we kind of own that,” Hirata said of its 35-employee New York team.

“Diane always said, ‘Put women before fashion,’” she added, noting new collection designs are now finely tweaked based on customer feedback and data as well as with Talita von Furstenberg’s input of ideas, which are influenced by her younger generation.

“DVF puts the woman before fashion,” Diane von Furstenberg echoed. “My point is to make the woman as confident, as beautiful and as ready as ever. The DVF clothes are collectibles — and because I started in the ’70s, they’re very timeless. The ’70s are like the ’30s, they’re two decades that never go out of style… If you go to any vintage store in the world, DVF is one of the best-selling lines, forever. You may find a dress that has already had three generations, and it’s still being sold.“

“[Learning] how to integrate with the same DVF ethos and not losing our brand DNA. That’s what we’ve learned in the past. When we try to be too trendy and too young, that’s when we lose our core customer because we’re stretching too far from the actual brand,” Talita von Furstenberg explained. “We have such an authentic DVF woman, so connecting back to that, especially during this period of downsizing and really rethinking and reevaluating. We’re really trying to refocus on her and how we can introduce that woman to a younger audience, versus introducing a younger audience to DVF.”