Diesel Shifts Into High Gear With Only the Brave

Diesel is taking a bold-fisted approach with its first solo men’s fragrance, Only the Brave. 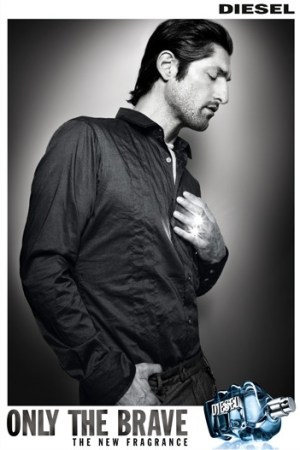 BERLIN — Diesel is taking a bold-fisted approach with its first solo men’s fragrance, Only the Brave.

This story first appeared in the January 23, 2009 issue of WWD. Subscribe Today.

Always one to break the mold, the new Diesel scent is bottled in a smoky, gray flacon in the shape of a clenched fist, branded by a silver Diesel silver ring on the third and fourth fingers. It was inspired by Diesel founder Renzo Rosso’s own hand, particularly the RR finger tattoos, which he gave himself for his 50th birthday.

Only the Brave, which was produced by Diesel’s fragrance licensee, L’Oréal, is set to roll out in almost 30,000 doors globally, starting in Germany at the end of March, France in mid-April and the rest of the world in May. In addition, a customized edition of the eau de toilette, designed by three “street” artists, is slated for September.

The scent’s name is also directly linked to Rosso through his holding company, which is also called Only the Brave. It encompasses Diesel and Rosso’s other interests — the Maison Martin Margiela and Viktor & Rolf brands. In addition, his Staff International makes and distributes ready-to-wear ranges for Sophia Kokosalaki, Dsquared, Vivienne Westwood and, as of next season, Marc Jacobs Men.

“L’Oréal asked if they could have something important for the new fragrance. And they got my hand and my name,” Rosso said, laughing. Only the Brave is also the name of his charitable foundation, which is currently developing what he would only call “an incredible new project. We’ll say more in a year’s time. But the name of the fragrance could help build awareness of the group and, more importantly, the foundation.”

L’Oréal, on the other hand, is banking on Only the Brave to again place Diesel among the world’s top five scents. L’Oréal executives declined to specify the sales target, but industry sources estimate that a men’s fragrance would have to generate $70 million at retail to land in the top five.

When L’Oréal launched its first men’s and women’s Diesel fragrances, Fuel for Life, in 2007, the goal was to be among the top 10. “And we achieved the top five and six positions” reported Ladan Lari, international managing director of Diesel fragrances. “Now we’re aiming for the top five. It’s not easy to have two perfumes in that position,” she said, noting only one other L’Oréal brand, Armani, has pulled it off. “But Only the Brave is a very different universe than Fuel for Life. It’s more artsy, more masculine. And we want them to coexist at retail.”

The oriental, woody, and leathery juice, developed by International Flavors & Fragrance’s Aliénor Massenet, Olivier Polge & Pierre Wargnye, bravely plays with opposites. It starts with a masculine and fashion-related note of leather. “But because Diesel is a joyful brand, it’s lightened up with lemon,” Lari said, and broken with dry woody cedar notes and amber.

L’Oréal and the Diesel creative team are still cooking up a screen ad for Only the Brave, but the campaign for print, billboard and point-of-sale features a triple-pack of black-and-white portraits. British photographer Platon, who has photographed any number of famous persons of conviction, including President Barack Obama, was invited to turn his lens on model, actor and former Madonna flame Tony Ward, as well as two other young men of determination and will. None are identified in the ads.

A new woman’s Diesel perfume is also in the pipeline. “It won’t be Only the Brave, but it will be emblematic of Diesel’s values and passions,” Lari said.