The company is behind major retail deals for mega influencers such as Gal Meets Glam, whose clothing collection is on track to do $35 million at retail this year.

Digital Brand Architects knows this economy well. In fact, it helped propel it. The nine-year-old digital talent management agency represents about 170 influencers, many of whom fall within the fashion and beauty categories, and is behind major influencer-retail partnerships such as Arielle Charnas of Something Navy and Julia Engel of Gal Meets Glam, both of whom launched clothing collections at Nordstrom.

Engel’s Gal Meets Glam Collection, which launched at 40 Nordstrom doors in April 2018, is said to have done $20 million at retail, including direct-to-consumer, last year. It is currently on track to do $35 million at retail in 2019, according to industry sources.

DBA’s influencers are not only experts in content creation, they know how to impact brands’ bottom lines. Engel, Charnas, Rachel Parcell, Aimee Song and Camila Coelho are among DBA’s top sales-drivers. Song and Coelho recently launched their own labels with Revolve — deals that were brokered by Digital Brand Products, DBA’s four-year-old sister agency. Both Song and Coelho’s collections were the most successful launches Revolve had ever seen, according to Daniel Landver, chief executive officer of Digital Brand Products. 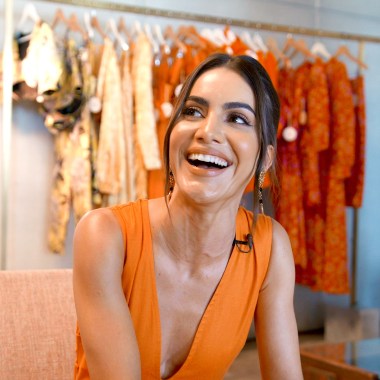 “There’s a really interesting intersection with digitally native brands and influencers overlapping in the sense that a lot of those tenets that are driving direct purchasing are consistent,” said Landver. “Content is one of the most relevant factors. Community is an incredibly relevant factor. Our role is to help develop, on the operations and product and infrastructure side, a great experience for the consumer.”

The key to lucrative influencer-retail partnerships, continued Landver, is a combination of data and passion — authenticity, to use the influencer buzz word. The more brand sponsorships an influencer does, the more — and better — data she is able to collect. Prior to launching the Gal Meets Glam Collection, Engel and DBA analyzed data from her sponsorship deals and affiliate programs to determine who her audience was and what the proper price points would be. The rest was up to Engel.

“Not everyone is as passionate as Julia and that’s what sets her apart in terms of her success,” said Landver. “She works 12 hours a day in design meetings because she cares about the final product. You can’t fake that.”

“When we started DBA almost 10 years ago, this economy didn’t exist,” said Penchansky. “Women are investing in other female-owned businesses, they’re buying homes. Being able to help women grow in terms of their own businesses, it’s part of our DNA. It’s who we are.”

As the influencer space evolves, Penchansky and Landver are noticing the emergence of niche influencers. One of DBA’s clients, a food influencer, sold 3,000 air fryers in one day. The unique profitability of niche influencers is due, in part, to the fact that they cater to a smaller, more engaged — and otherwise untapped — audience.

“Could be an air fryer, could be [a] plus-size [clothing collection], it’s all about connection to the community,” said Landver. “Getting to the customer now is not [saying], ‘hey we have everything for everyone’ — no one connects to that. It’s about, ‘I have something that’s really special for you from a trusted voice and a unique special product.’ That compels a lot of purchasing.”

In February, WWD reported that United Talent Agency, which represents Gwyneth Paltrow and Wes Anderson, had acquired DBA. DBA continues to operate as a separate company, but the acquisition has given it access to UTA’s breadth of services.

“[UTA is] obviously decades-old in terms of helping people build out their brands and create more traditional content, whether it’s film or television,” said Penchansky. “We have access to all of their resources and institutional knowledge. We have a number of clients currently who are in television production deals. That all happened after the acquisition.”

Platform diversification is one major trend Penchansky is noticing, particularly influencers launching their own podcasts or video series.

“Podcasting is more of an intimate medium and requires an even deeper relationship with your audience for people to listen to episodes,” said Penchansky. “We’re seeing people talk about [short-form streaming service] Quibi. There’s no one who is better suited for that than the [influencers] who are in this space because that’s what they do organically. The evolution of what content would look like in more of a video entertainment format is something you’re going to see as a trend.”

Lauren Hutton on How the Beauty Industry Has Changed