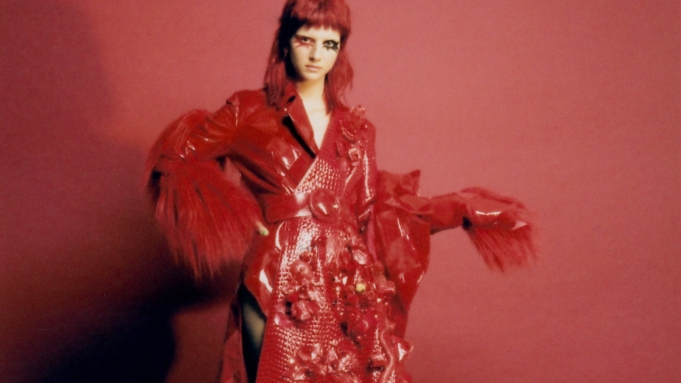 LONDON — The up-and-coming designer Dilara Findikoglu first made industry heads turn last year, when she staged a guerrilla fashion show outside Central Saint Martins, where she studied for her fashion BA, in response to not being selected to participate in the college’s annual graduate show.

“When I didn’t see my name on the list, I thought that this can’t be the end — I have to do something about it. I come from a country that is not even in the European Union — it is not considered a fashion capital — so I had to work really hard to be in London,” said the Turkish designer.

Findikoglu’s maverick streak also comes through in her design aesthetic. Her clothing comes with embroidered symbols, embellishments and even corsetry, to make a statement about social and political issues that matter to her, from feminism to religion.

Since graduating from Saint Martins, the designer has gone on to re-create wearable versions of some of the signature pieces from her graduate collection. They have been incorporated into her fall 2016 look book, which was released earlier this month, while pieces from her fall collection will be launching in Selfridges’ new Designer Studio later this month and will sit next to brands such as Maison Margiela, Jacquemus, Le Kilt and Craig Green women’s.

“Initially, my pieces were very heavy, so I wanted to rework them for people to see my work as salable and not costume-driven. To survive, I obviously need to make it more wearable, but still true to my style. I won’t ever do streetwear, or something extremely minimalist, but I feel like everything I do can be transformed into something a bit more wearable. This is what helped me get into Selfridges, too,” said Findikoglu.

Some of the standout pieces from her fall 2016 collection include an oversize coat made from a material and pattern that resemble traditional Turkish tapestries; a checked suit with appliquéd drawings, evil-eye and bleeding-heart symbols at the back, and a silver brocade dress with an exaggerated front split.

Findikoglu was inspired by the idea of creating her own religion as a reaction to the increasing influence of religion in Turkey and the limitations it has been imposing on women and the younger generation. “I come from a very religious country. It wasn’t like that, but at the moment there are loads of problems in Turkey. So I wanted to create a religion that wasn’t unequal, that wasn’t creating war.”

Looking back at the experience of studying at Saint Martins, the designer recalls getting a wake-up call about some of the industry’s harshest realities, which are far from the romanticized vision she had while growing up in Turkey.

“I knew I wanted to do fashion somehow, and I was always very ambitious, but I only found out about Central Saint Martins when I was around 16 years old, as I was reading about John Galliano. I thought if he graduated from there, I need to go there,” Findikoglu said.

“When I got in, it was unbelievable, and my time there was also really valuable, but it also made me realize that I had a different idea of fashion before I started studying. I started thinking that the industry is a bit shallow, the people are bitchy and it’s also an unfair industry as well; I started learning about what was going on behind the scenes in other countries, with child labor and a lack of workers’ rights. When I started interning and researching about all these things, I started thinking that it wasn’t all I thought it was.”

Having accepted that her talent resided in clothing design, Findikoglu decided to start her namesake label and commit herself to using fashion as a platform to make political statements about topics she feels strongly about. In her attempt to shift the power toward women, she has made suiting one of her signatures and also offers made-to-order services that allow customers to personalize their suits.

The designer plans to show during London Fashion Week in September, and said her spring 2017 collection will draw its references from religion and the way women are portrayed across different cultures.

“My new collection will be about how women’s bodies are represented in different cultures and different periods. Everyone says it’s a man’s world and women’s destinies are determined by them, so my new collection will shift the focus on women and how they have been represented in different cultures and different periods, from how Mexican gangs treat women, to Elizabethan England and the issue of child marriages in the Middle East. During Elizabethan times, Shakespeare was not using female actors because, at the time, they were not allowed to go onstage.” At the same time, she said, Queen Elizabeth was allowed to rule the country and didn’t have to get married. “That is affecting me,” said Findikoglu.

The designer plans to partner with London-based jewelry brand My Flash Trash to create charms for her spring collection, and said she hopes to work on additional categories in the future, including sunglasses and footwear. She currently sources her footwear from friend and fellow Turkish designer Dora Teymur.