In Their Own Words: Fashion Greats ‘Chat’ in New Book 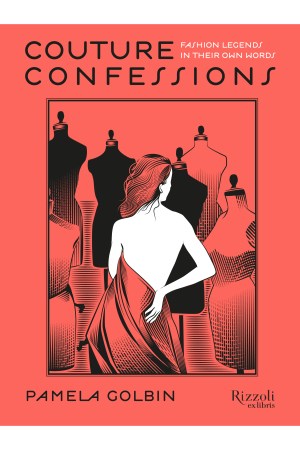 PARIS — “This book is really about the founders, those who made fashion history — the legends in their own words,” Pamela Golbin says about “Couture Confessions: Fashion Legends in Their Own Words,” due out June 7 from Rizzoli.

The 240-page hardcover sees Golbin, chief curator of fashion and textiles at Les Arts Décoratifs, compiling 11 impossible interviews: impossible because all the designers — from Paul Poiret through to Lee Alexander McQueen — are deceased.

Yet she found enough source material such that all the answers are near real, giving readers a chance to learn about the history of fashion via intimate conversations with the likes of Jeanne Lanvin, Yves Saint Laurent, Cristóbal Balenciaga and Madame Grès.

“It’s about the incredible achievements of these people who created the fashion myth and legend that we still live on today,” she said in an interview.

Golbin hit on the idea for the book when she was mounting the Madeleine Vionnet retrospective at Les Arts Décoratifs back in 2009. “I found so much reference material of her speaking,” she marveled. “Why should I interpret what she said if she was very clear and precise?”

Of her subjects, Poiret was probably the most effusive, and Balenciaga the most reserved, forcing her to go to third parties to compile an interview with the latter.

She found Christian Dior the most eloquent, as he penned many books; Gabrielle Chanel the most incisive, and McQueen the most unfiltered. For example, the latter confessed to Golbin: “I loved synchronized swimming when I was a little boy, and my mother would take me and she was horrified because I was the only little boy and there were 40 girls.”

Asked about accessories, Elsa Schiaparelli is adamant that shoes should be unfussy: free of trimmings, bows and perforations so they don’t overwhelm the outfit. And handbags? “It’s better to own one good bag than half a dozen of inferior quality,” she advises.

Chanel was upfront about her limited skills. “You know, I can’t sew, not even a button. I sketch very little…dress designing is not sketching. It is not art. It is taste, plus a sense of professionalism,” she says. “I work with a pair of scissors and lots of pins.”

Modesty was not her forte either. “You have no idea how hard it is to work without competition,” she says. “I continue to work, though, to stave off boredom. Balenciaga is the only designer I admire. Saint Laurent has excellent taste. The more he copies me the better taste he displays.”

In one of his rare declarations, Balenciaga confesses that when he was a young man, a specialist told him he was too delicate to be a couturier. “Nobody knows what a hard métier it is, how killing is the work. Under all this luxury and glamour…c’est la vie d’ un chien [it’s a dog’s life].”

Golbin noted that Poiret, too, complained about the relentless pace and time pressures of fashion.

McQueen was unequivocal that insecurity kept him going. “You can never take anything for granted in fashion. The only way to keep going in the right direction is to be constantly apprehensive. Fear is my best friend,” he says.

To cap off the book, illustrated by Yann Legendre, Golbin assembles her 11 subjects for a round-table meant to define fashion — a slippery topic in any era, it turns out.

“There are many trends, but fashion is what endures,” muses Pierre Balmain.

“What is fashion? You tell me,” Chanel says. “I am certain that not one single soul would be able to give a valid answer…and I include myself.”