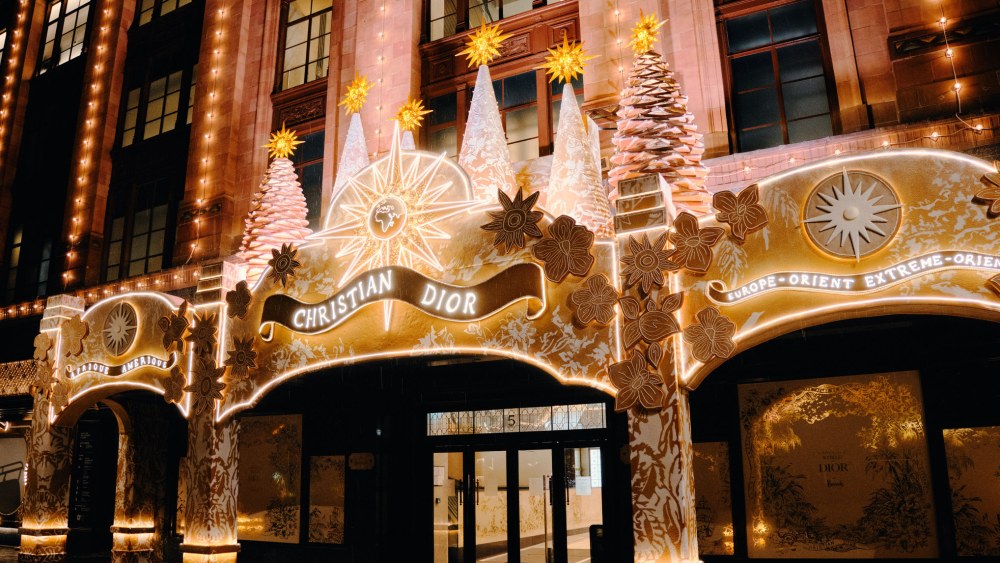 LONDON — Dior is making history at Harrods with a larger- (and sometimes smaller-) than-life holiday takeover that sees Monsieur Dior, his family and his atelier come alive in a gingerbread world.

There is no Santa’s Grotto at Harrods this year, but with the House of Dior in town who needs the North Pole contingent anyway?

Dior has never had a collaboration on this scale with a department store, and this is Harrods’ largest brand takeover to date.

Inside and outside the store, Dior has replaced the season’s usual red and green hues with warm cookie browns, caramel, cinnamon and powdered sugar white.

The takeover encompasses 44 windows, the facade of the Knightsbridge store, a café and two pop-up shops.

The centerpiece is an immersive experience that traces the life of founder Christian Dior, and the evolution of the couture house. It features animated tableaux made from large and small gingerbread cookies, piped icing and colored candy.

A mega-star measuring 17 meters, or almost 60 feet, high hangs above the Brompton Road entrance, and forms part of a lavish 3D display inspired by sketches from the Roman artist Pietro Ruffo for the Dior cruise 2023 collection.

Around the corner, on Hans Crescent, a little forest of gingerbread fir trees dusted in white sugar sits above the entrance to Harrods’ Door No. 5. Thursday night will be the first time the entire facade lights up as both brands mark the opening with a cocktail at the store, followed by a dinner.

The London-based tennis star and Dior ambassador Emma Raducanu is set to cut the ribbon.

“The Fabulous World of Dior” at Harrods, which runs from Thursday to Jan. 3, takes inspiration from the brand’s new 30 Avenue Montaigne flagship which aims to highlight all facets of the brand, and then some.

It also dovetails with chairman and chief executive officer Pietro Beccari’s desire to conjure a sense of fantasy.

Dior certainly showed up at the right time.

Britain, like so many other countries, is facing economic difficulty, a cost-of-living crisis and possible fuel shortages this winter. London in particular is suffering from a decline in international tourism and has just witnessed the cancellation of tax breaks for shoppers who live outside the U.K.

Beccari said the Harrods takeover “comes at a time when people want to be distracted, when they want to have a moment of joy. At Dior, we cannot change the world, but we can do our job, and our job is to make people dream. Here, I believe we’ve fulfilled that task.”

Asked why Dior chose London for the takeover, Beccari said the British capital is one of the most beautiful cities at Christmas. Dior chose Harrods because of its long history with the retailer.

Founder Christian Dior inaugurated a corner shop at Harrods in 1953, and a few months later, he chose it as the venue for his spring 1954 collection.

Dior attended that show in person in a designated “Dior room” at the store. He adored British culture and went on to give future styles names including Dickens, Londres, Chelsea, Mayfair, Piccadilly and Cambridge.

Beccari said Dior was also inspired by American department store Christmas windows and the ritual of taking children to see them.

“We wanted to enter into this tradition, and be a part of it. Mr. Dior had a very strong sense of family, and you’ll even see his mother in the exhibition. I think it’s nice to have that sense of family at Christmas,” he added.

Michael Ward, managing director of Harrods, said the store is “so proud of this collaboration, which feels like the culmination moment of our 70-year shared history.” Ward described the project as “our most exquisite and enchanting takeover to date.”

Dior is in London for other reasons, too. It has an expanded fan base here following its exhibition at the Victoria and Albert Museum in 2019.

Tickets to “Christian Dior: Designer of Dreams” sold out less than three weeks after opening, and welcomed nearly 600,000 visitors. The show’s run was extended from July until September 2019, and was one of the most successful in the museum’s history.

It was the largest and most comprehensive British show on the House of Dior, a grand sweep of sparkle, rippling wool, sculpted jackets and floral prints and motifs. The show threw light on the designer’s fascination with Britain, his “lines” and defining looks, and his international outlook and inspirations from history.

Telling the story of a brand, taking the time to lay out its history and culture is clearly important to Beccari.

“As a brand today, sharing your set of values is almost a must,” said the CEO. “You don’t only sell products, you sell who you are. You sell your history, your savoir faire, and you have to speak about it. It’s retail 2.0,” Beccari said.

That’s one reason why the Paris flagship also has a café, a restaurant, private apartment and permanent exhibition space. It’s why the Harrods installation has a strong cultural element and is also serving lunch and patisseries inspired by Christian Dior’s history and love of food.

Beccari said he always keeps in mind the founder’s idea that Dior should never be “too traditional, or too literal. He thought traditions needed to be tickled, to be pulled, to be stretched, to be relevant for today, and even to be ironic,” Beccari said.

Team Dior took that idea to heart, particularly for the exhibition, which is like walking into the fusion of a puppet theatre and a Pixar film.

Dior worked with five creative companies on the display. It features recreations of 30 Avenue Montaigne when Christian Dior worked there, as well as the designer’s childhood home in Granville, on the Normandy coast, and La Colle Noir, the designer’s manor house near Grasse.

The buildings are filled with animated gingerbread figures of Dior, always with a little lily of the valley picked out in white icing on his jacket. He appears with his gingerbread mother by the sea in Normandy, or sitting at his meticulously arranged desk dreaming up dress designs. His ideas appear in little clouds above his head.

Behind the illuminated windows of the gingerbread Avenue Montaigne store, little shadows flicker here and there showing all the activity inside. On one floor, cookie cutter seamstresses work on sewing machines made from gingerbread. In another part of the atelier, mechanical bees deliver tiny buttons and carry bits of measuring tape.

A gingerbread fairy godmother appears at one point, transforming sugar into dresses, and back again into sugar.

There are digital effects, too, such as colored flowers cascading over a tall cookie house that showcases the brand’s historic fragrances. At the end of the show, digital fireworks and shooting stars burst over the sea in Normandy.

Cookie trees, roses and other flora populate the space. They’re not edible, but Dior has that covered.

Real gingerbread cookies in the shape of the Bar jacket, the Dior Book Tote, and Lady Dior bags are for sale at Le Café Dior, where diners can sit on chairs covered in the Dior toile de Jouy and eat from wooden tables carved with the toile designs.

The installation also features two pop-ups, one of which is a gift shop with walls, drawers and units made to look like iced gingerbread. Conveyor belts, meanwhile, showcase Christmas cookies, pastries, and Dior ready to wear, accessories, sweaters and homeware items.

The second pop up is a gingerbread house representing Monsieur Dior’s atelier and offers a look at how the Lady Dior and other bags and accessories are made.

Beauty has its moment, too, with two additional spaces. One is dedicated to La Collection Privée Christian Dior fragrance collection. The other focuses on makeup, treatments and additional Dior fragrances.

There are dedicated collections for the takeover, including a men’s capsule by Kim Jones. One of the pieces is a double-breasted jacket made in a shade of Harrods green.

Other products on offer include the Miss Dior chair designed by Philippe Starck.