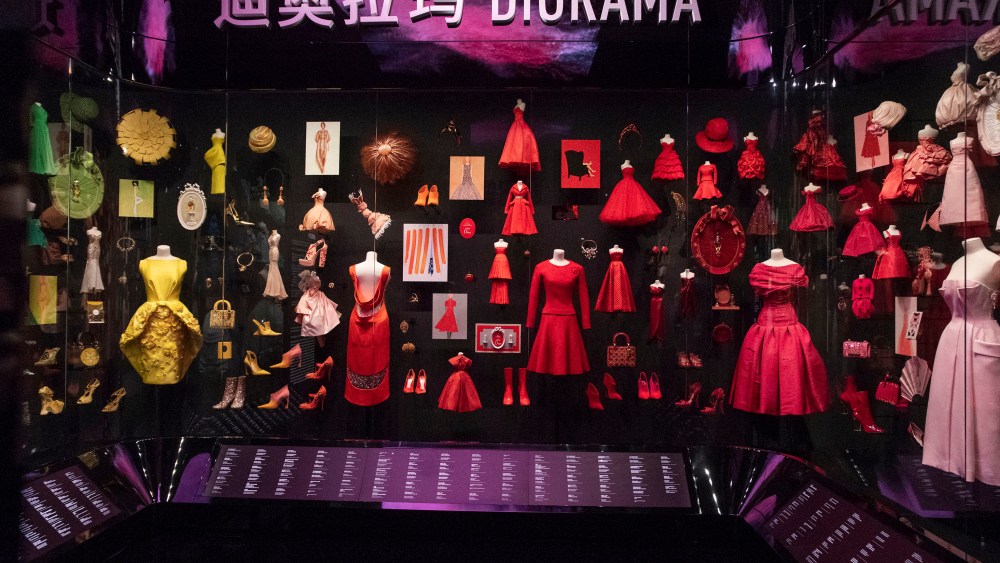 SHANGHAI — It was a rare night at the unveiling of Dior’s “Designer of Dreams” exhibition to see more than 700 guests gathered in one place.

As China has slowly recovered from COVID-19 over the past few months, fashion brands have put on cocktails, intimate dinners and even a concert here or there. But the Dior opening at the Long Museum was the first truly large-scale fashion event of the year here, a full seven months into 2020, and the crowd turned out with gusto.

The exhibition was originally planned for May, but finally made its debut on Friday. Shanghai is the third destination for the retrospective after Paris and London — officially open to the public on July 28 and running until Oct. 4 — allowed by the fact that the city has managed to dodge the second and even third COVID-19 outbreaks that have cropped up in cities like Beijing and Hong Kong.

All in all, it has been a very busy week for the French house. The day before the exhibition opened, the brand showed digitally its cruise collection inspired by Puglia and right after the opening, it had planned its largest showing of high jewelry for its VIP clients, also in Shanghai.

Exhibition curator Oriole Cullen, speaking by phone due to ongoing travel bans, laid out just how much of a logistical feat it was to set up while the team was spread across China, Paris, London and Montreal.

“The team at Dior created nearly 80 individual films for colleagues in China to explain how the archives needed to be dressed,” she said. “It was 10-hour Zoom calls every day with China in terms of the install.”

Because the Chinese audience is most familiar with the modern-day Dior, Cullen said it was a purposeful choice to place a piece from Maria Grazia Chiuri at the front to greet visitors along with the facade of 30 Avenue Montaigne. Inside, 275 haute couture dresses are on show, arranged in 14 themes ranging from the New Look, Christian Dior’s life, highlights from the six subsequent designers that have led the house, and conceptual favorites like Versailles, the atelier, gardens and the label’s many moments created with Hollywood stars and royalty.

To adapt the exhibition to the market, Cullen said the brand consulted with Hung Huang and tapped into its collaborations with Chinese artists such as Xu Bing, Lin Tianmiao, Gao Weigang, Wang Guangle and Yan Peiming, and editorial photography over the years featuring Dior by Feng Hai, Leslie Zhang and Gangao Lang.

While some artworks like Lin’s “Procedure” installation had been commissioned by Dior for earlier shows, Gao, for instance, had created an installation art piece inspired by the J’adore perfume that involved creating a tiered, gold pyramid-like structure atop which sat a spherical moon, representing the feminine.

On Saturday though, the house changed tack to pamper its high-jewelry VIPs at the Amanyangyun. Over the next three days, ensconced in the neoclassical Chinese resort located on the far outskirts of Shanghai, the brand planned to entertain more than 100 guests with cognac and tea tastings, yoga, Ebru workshops, and origami making.

Come evening, the jewelry would be presented beside the resort’s river in a cocktail presentation format on models in 16 flowy Grecian couture looks designed by Chiuri and followed by a dinner in a long gazebo re-created to resemble a French garden.

But some VIPs were not waiting for the full effect. By afternoon, pieces from the colorful tie-dye-inspired jewelry collection were already being snapped up and taken out.

“The inspiration was tie-dye fabric, a pattern that has been used quite a bit at Dior by various designers of the house. I thought it was interesting to replicate the effect with jewelry,” explained the house’s longtime jewelry designer Victoire de Castellane, also by phone interview.

“I love working with color, I love imagining movement with color,” continued the designer, who has explored new combinations of stones over two decades in the position — building a vast fan base along the way. Many pieces in this collection focused on one color, offering it in various gradations, including a deep blue ring in white gold that carries a cluster of diamonds, tanzanites and sapphires or a similar one anchored with a prominent emerald with various hues of tsavorite garnets gathered around one side, adding asymmetry — and lightened with a row of diamonds.

“I played with the idea of dye, as if the stones were dye that introduced streaks of color and gradations of color,” she explained.

“With tie-dye, there is white space — I did this with diamonds, the white part is symbolized with diamonds,” noted de Castellane.

“I found it quite amusing to do this with jewelry,” she concluded.

The designer agreed that the new jewelry recalled a previous examination of color, the “Gem Dior” collection, which worked bright stones into stark pieces meant to represent pixels. But here, the exploration of color is more gentle.

“It’s a bit softer, with different movement, as if the colors mix and move, whereas the previous one was more mineral and more static,” she noted.

Conveying this softness were pearls — a key element of the collection.

“It was the first time I used pearls,” laughed de Castellane.

“I am fascinated with pearls, in antiquity, they were called the tears of Venus — the symbolism of the idea that Aphrodite, or Venus cried in the sea and the tears became pearls. I find it such a lovely story,” she said.

A pair of earrings had a large white pearl — perched on the top of one side, and set on the bottom of the other earring — offsetting a cluster of small diamonds and a large ruby.

“I’m also fascinated by the roundness of pearls, they’re like small, silky spheres, next to the gemstones that are bursting with color,” explained de Castellane.

“I find it very beautiful to set them against one another — the softness and tenderness of the pearls with the forcefulness of stones,” she said.

She also used colored pearls—including pink, golden and pistachio pearls — to bring new forms of color. The golden pearls served as the focal point for a pair of long earrings, with rows of various cuts of diamonds snaking around them, fixed with yellow gold.

“When it comes to the size of the stones, I always like to maintain a lot of freedom, I enjoy mixing different forms and volumes — this is what makes things more lively, and less static,” said de Castellane.

“I like the idea of mixing cushion cuts, oval shaped stones, round cuts — there were a lot of small, round stones — bringing them together in a way that creates movement and turns,” she explained.

While pearls normally sit at the center of traditional jewelry, the designer rearranged them, nudging them to one side of a ring, or plopping them on top of a cluster of stones, including a pink sapphire the same size, like the proverbial cherry on a cake — but on an earring.

“In traditional jewelry, the pearl is often at the center of a piece — here, I put it to the side, to show that it is something more than just a classic centerpiece,” noted de Castellane.

As for colored stones, she said she drew on the whole range customarily used by the house, rattling off a few — emeralds, rubies, various-colored sapphires, tanzanites, tsavorite garnets and paraiba tourmalines.

There were no opals, however.

Commenting on the abstract nature of the collection, which contrasts with some more figurative ones in the past, inspired by the architecture of Versailles or daisies drawn by Christian Dior, to give just two examples, de Castellane noted she enjoys exploring different styles.

“Some clients like figurative pieces while others like abstract ones,” she noted. “I like a mix. In life you can have different personalities, different desires depending on the moment — I find it’s important,” she said.

“There are some things I might love at a given time, but then I will look for change, and maybe come back again to the things I liked before,” she said.

Making jewelry helps to serve as an antidote to anxious times, suggested the designer.

“It allows people to dream a little,” she said.