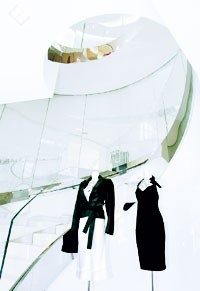 PARIS — Blending 18th-century moldings with futuristic lacquer, and the diverse styles of John Galliano and Hedi Slimane, Dior’s fifth freestanding store in the French capital bows today on Rue Royale — just in time for the men’s shows and couture week.

Although the retail business has been sluggish in Paris for the past year due to a drop in tourism, Dior president Sidney Toledano noted the company’s June sales vaulted 20 percent. “We’re seeing a positive trend,” he said in an interview. “We’re seeing some tourists coming back, including more Americans.”

Shoppers who enter from Rue Royale first encounter a gleaming white room with black stone floors devoted to handbags and accessories, the main drivers of the Dior business, with prime real estate given to the new “Rasta” line of logo canvas banded in Jamaican colors.

A central spiral staircase, surrounded by mirrors engraved with stripes and railed in glass, is the principal architectural focus of the women’s store, leading to a shoe salon on the mezzanine and the expansive rtw offering on the second floor. Here, Galliano’s pre-fall collections line the perimeter, with recessed areas showcasing evening dresses and furs. A floor-to-ceiling glass shelf displaying iconic Dior handbags of the Galliano era divides the room.

The 1,100-square-foot basement level — accessible from a separate entrance — is devoted to Dior Homme, with an accent on accessories, in addition to selections of ready-to-wear, a new range of colognes and a “demi-mesure” service.

Striking and graphic, with a focus on horizontal bands of alternating black and white, the men’s area resembles those in the Dior stores in New York and Tokyo, but with more mirrors and angles, creating a fragmented, occasionally disorienting look.

That spirit is echoed in fitting rooms created by Belgian artist Ann Veronica Janssens, who uses strong light to break down perceptual barriers.

Meanwhile, Slimane is still on the hunt for a space on the Left Bank of Paris for his first Dior Homme flagship in the French capital.

The Rue Royale flagship brings the number of Dior stores worldwide to 168. Other significant openings planned for the second half include a unit in Taipei and a multistory flagship in Tokyo’s Ginza district.

Separately this week, Slimane unveiled to WWD his first watch designs for Dior Homme, slated for delivery to Dior boutiques in September. Emphasizing classicism over trends, Slimane opted to put the focus on watchmaking, not fashion, enlisting Swiss firm Zenith to execute his slightly off-center design. All three styles boast metal bracelets, automatic movements, subtly off-kilter details and a tiny dash of red on one of the push buttons.

Slimane described the sporty and chunky style as an “everyday” watch with hidden luxuries. The most complex and upscale design, capable of measuring time to a tenth of a second, even has a small diamond mounted on the back. “It’s just one and basically no one is supposed to know about it,” he said. “It’s not a showoff watch. It’s more discreet”