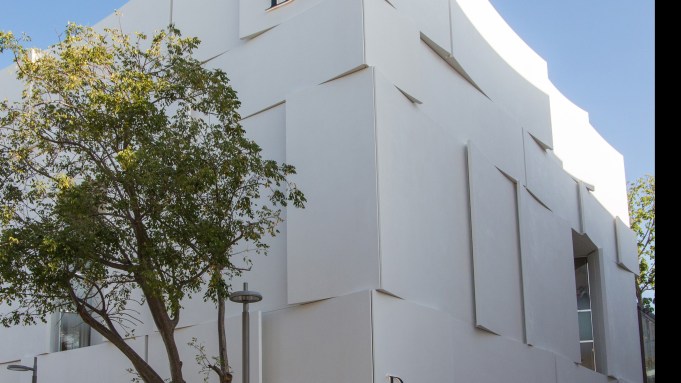 MIAMI — Dior’s flagship for women’s wear and accessories, which opens today at 162 Northeast 39th Street, is the latest square in the Miami Design District’s patchwork quilt of white sculptural facades. Though it could easily reference the nearby ocean waves or sails, the French firm Barbarito Bancel Architectes came up with the idea from the house’s custom of starting with its fashion archives — a Japanese-inspired dress from the spring 2007 couture collection in this instance.

“We always show the architects dresses when we do the facade,” said Sidney Toledano, president and chief executive officer of Dior Couture.

He said the specially treated concrete for the exterior was developed in Italy. Huge samples were delivered to the street in front of Dior’s Avenue Montaigne building in Paris and Toledano himself checked the slabs for their quality and look. “It took several models to get the white color we wanted and to test it,” he recalled.

Following Tokyo and Seoul, this is only the third location crowned with a five-pointed star (whose northwest position captures the orange and hot pink glow of Miami’s signature sunset). The good-luck symbol guided Christian Dior himself in making a major business decision: Upon finding a brass star on the ground in front of a building on Avenue Montaigne, he saw it as a sign and opened his house there. The Dior museum in Granville, France, displays the original, and being superstitious, the late designer always carried a smaller replica in his pocket. Coming full-circle, the house has secured another superb location, according to Toledano.

“Our neighbors are Vuitton, Cartier and Hermès. You see the cross, and you have those four brands,” he said, regarding Dior’s first street address here for women’s wear and accessories — Dior Homme opened a block away in 2012. The brand has a presence in local malls, from in-store shops at Saks Fifth Avenue and Bloomingdale’s to its former boutique in Bal Harbour Shops. “We were doing well, except we needed more room for different classifications,” the ceo said.

Indeed, they brought the goods in every way. Whereas the exterior soothes like a reflection pond, which becomes more pronounced at night through strategically placed lighting, the interior explodes with stimulation. A floor-to-ceiling, 42-screen video wall projects artist Oyoram’s mash-up of couture, campaign and jewelry images to hypnotic effect, especially as they ricochet off the mirrored ceiling and staircase’s glass-panel railing. Other Dior stores incorporate his video walls but few to this magnitude. Terence Main’s five-seat aluminum bench, among 13 commissioned works by 12 artists and designers, circles a glorious spray of delphiniums, a link to the spring runway show. The founding designer adored gardens, a consistent expression in the house’s stores, so nature is celebrated in real and faux forms as the subject of back-lit photo walls and a rooftop terrace landscaped with lush tropical plants. Its white sofas and umbrellas borrow from South Beach’s boutique hotel phenomenon. It adjoins a VIP salon, a gray gossamer cocoon of velvet sofas and a cushy, silver metallic-threaded carpet, with a room divider to accommodate various fittings and groups.

Five works of art, including Larry Bell’s iridescent Mylar hanging sculpture and Roland Mellan’s cocktail table in a trippy pattern — more examples of the idea of movement — further demarcate the interior of the VIP salon.

“Having good days in Florida, the terrace is for serving drinks and to enjoy and entertain,” said Toledano, describing clients’ habit of spending time to see and experience products. “This is why we’ve developed those VIP rooms where we get some privacy, and the terrace adds to that.”

The second floor’s homey, open-loft layout for ready-to-wear and shoes takes after Peter Marino’s concept for the SoHo store in New York. A huge seating area with organically shaped love seats flanking Sebastian Brajkovic’s vortex-topped cocktail table occupies the center. Once the eyes adjust to multitextured surfaces of mirror, mottled paint treatments and pale paillettes grounded by white oak floors, natural light seeps through narrow, ribbonlike windows tucked behind curved walls. It filters through a candy-striped organza gown, an elegant version of a caftan, the cut of choice in this resort city. White dresses — mini, shirt and pleated drop-waist — with traditional and reversed scalloped edges and paired with cropped knits also work for the climate.

Rather than isolate categories, Dior is testing a full lifestyle wall for ward-robing. Clients can be led seamlessly from rtw to the shoe salon, where a mannequin poses among the shelves to advertise the season’s pointy pump with an ankle bow strap.

The same flow occurs on the first floor between bags and small accessories and the fine-jewelry salon, where a grand piano in a miniature vignette of Christian Dior’s apartment cradles a one-off Archi Dior Bar en Corolle cuff of emeralds and pink and purple sapphires.

Handbags favor Miami-friendly exotic skins, metallics and shocking colors. Diorever bags in sunny gold and “fuchsia fluo” — a fluorescent pink — pop in the gray textured setting, while Lady Dior styles come in pink python, micro-cannage and embellishments such as silver palladium waves. Displays focus on looks for the locale. One vignette suggests several combinations for Diorama bags, So Real sunglasses and Fusion sequined sneakers for “get in and get out” ease without ever leaving the ground floor.

Intensely focused on North American expansion, Dior will open its San Francisco flagship at 185 Post Street in Union Square in April — its fifth in  the U.S. It had operated a Dior Homme boutique in the city since 2011, but closed it in January to highlight women’s wear exclusively and build on wholesale businesses at Saks Fifth Avenue and Bloomingdale’s.

“Having a freestanding store, a big space, is the best way to express the brand. It’s a commitment to the U.S. market,” said Toledano, adding that both new stores follow the same basic inventory plan, though merchandisers adapt to different customer bases. “Miami has a lot of South Americans. In San Francisco, there are more people visiting from Asia.”

Oyoram’s video wall and India Mahdavi’s Bishop stools will cross over to San Francisco’s two selling floors with about half the amount of art as in Miami. The shoe salon will house Rob Wynne’s mirrored glass installation titled “Dots.” Toledano said a third level will serve as more exhibition space.

An internal design team met the challenge of layering marble touches to an existing masonry structure that had already been preserved with a glass overlay for a sustainable modern makeover. Interiors are inspired by Marino’s Avenue Montaigne concept and its evolution for the 57th Street store in New York.

Toledano noted, “We had to respect San Francisco’s regulations.”