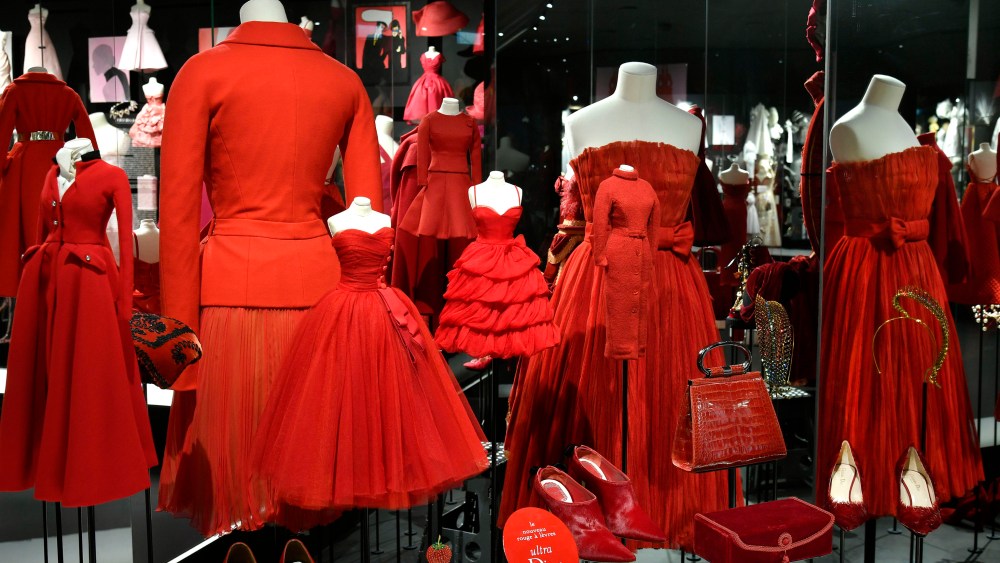 PARIS — Call it The Book of Dior.

Billed as the largest fashion exhibition ever hosted at Les Arts Décoratifs, the Christian Dior retrospective, which opens to the public on Wednesday, provides the most comprehensive overview to date of the designer, his successors and the themes that inspired him.

Featuring more than 300 haute couture gowns, alongside hundreds of documents — including photographs, sketches, illustrations, letters and advertising — it comes on the heels of a series of Dior exhibitions in recent years in Beijing, Moscow, Shanghai and Seoul.

“This is the most ambitious to date,” said Sidney Toledano, chairman and chief executive officer of Christian Dior Couture. “For Paris, we had to push it to the limit and it’s beyond what we’ve done elsewhere on every level — in terms of the quantity of dresses and works of art. This is where it resonates the most.”

The French fashion house will inaugurate the exhibit with a party today following creative director Maria Grazia Chiuri’s haute couture show. Describing it as “an important moment for Paris,” Toledano has encouraged all the house’s employees to soak up the display, which is scheduled to run until Jan. 7.

“It’s the best lesson about Dior and about fashion at this level. It’s as if an art student went to the Louvre to study all the Old Masters. We are fortunate to have Old Masters at Dior,” he said.

The last Parisian retrospective dedicated to Christian Dior, held at Les Arts Décoratifs in 1987, focused on 10 years of the couturier’s designs, from 1947 to his untimely death in 1957.

This exhibition also showcases designs by all of the founding couturier’s successors: Yves Saint Laurent, Marc Bohan, Gianfranco Ferré, John Galliano, Raf Simons and Chiuri, including a dress from her very first couture collection for the house, shown in January.

Among the highlights is a ballroom inspired by the Hall of Mirrors at the Château de Versailles, featuring gowns including the pink dress in which Jennifer Lawrence famously tripped at the Oscars in 2014, and the navy silk slipdress that Princess Diana wore to the 1996 Met Gala.

Many of the items are from the Dior Héritage archives and have never before been seen in Paris. Additional pieces are on loan from institutions including the Costume Institute at the Metropolitan Museum of Art in New York, London’s Victoria and Albert Museum and the Fondation Pierre Bergé-Yves Saint Laurent.

There are sections devoted to travel, gardens, 18th-century influences and the atelier, with a funnel-like room piled high with muslin patterns, or toiles. It will be staffed by a rotating team of seamstresses from the house’s workshop at its headquarters on Avenue Montaigne.

In addition, the show features a catalog of artworks on loan from institutions including the Louvre and the Musée d’Orsay. There are paintings by Claude Monet, Auguste Renoir, Giovanni Boldini and Thomas Gainsborough, and antiques including the bust of Nefertiti that inspired one of Galliano’s collections.

“The idea was to show that the universe of the Christian Dior house is extremely sophisticated and cultivated, drawing inspiration from many different sources,” said Olivier Gabet, museums director at Les Arts Décoratifs. He curated the exhibition with Florence Müller, who worked on the “Esprit Dior” show in Beijing in 2012.

The show opens with Diablesse, a bright red pleated wool day dress from Dior’s second collection for fall 1947, displayed alongside a photograph of the designer wielding a stick, like a conductor directing his orchestra.

The first room features documents on loan from the Christian Dior Museum in Granville, Normandy, including an advertisement for his family’s fertilizer business that proclaims: “L’engrais Dior, c’est de l’or” (“Dior fertilizer is gold” in English).

“All of the letters we saw when preparing the show confirmed that he was both an artist and a businessman,” said Müller. “He supervised everything down to the recruitment of staff, because he understood that his house’s success depended not only on the beauty of the dresses, but also on sound management.”

Despite his bourgeois background, Dior began his career as a gallerist working with avant-garde artists — as reflected by a room featuring works by Surrealists, including Salvador Dalí’s “Retrospective Bust of a Woman.”

After his family lost its fortune in the Great Depression, Dior learned fashion drawing and started selling designs to magazines and couturiers.

“A lot of houses today claim a link with art. At Christian Dior, it’s fairly consubstantial, because he got his start in the world of contemporary art,” said Gabet. “He was surrounded by mavericks — all the most daring and revolutionary people.”

The exhibit details how his successors continued to draw inspiration from art. A Galliano dress is shown alongside a Boldini portrait, while a Simons creation is juxtaposed with a painting by Agnes Martin. Müller pointed out the delicate mille-feuille structure of a Simons dress.

“One of the purposes of this exhibition is for people to really understand the level of detail that goes into these haute couture creations, because they go by too fast in a catwalk show, which very few people attend, and it doesn’t come across in photographs,” she noted.

“At the time, it was very new to work on all the different components of an outfit, from the underwear to the makeup,” said Müller. “He had a global vision and he deployed it through licenses, which he pioneered. Pierre Cardin was not the first to do that. People tend to forget that.”

In fact, Dior registered his fragrance division in 1946, before he had shown a single piece of clothing. A room is devoted to Miss Dior, the fragrance inspired by his sister Catherine, a World War II resistance fighter.

“He developed all of his activities simultaneously from the start, as well as creating subsidiaries overseas. It marks the beginning of the global development of a house,” Müller said.

A hefty catalogue, authored by Gabet and Müller and published by Thames & Hudson, accompanies the show.