The fashion world may be obsessed with Russia, India, China and Brazil, but the brass at Christian Dior still sees the U.S. as a land of opportunity. 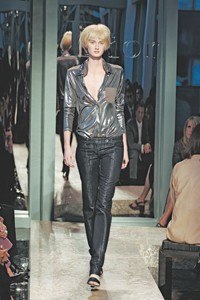 NEW YORK — The fashion world may be obsessed with Russia, India, China and Brazil, but the brass at Christian Dior still sees the U.S. as a land of opportunity. Which is why John Galliano brought his cruise collection to town on Tuesday night, where he held a splashy yet intimate event in the Magic Room in the LVMH Tower on 57th Street, followed by a dinner at the Four Seasons.

The show itself was tame by Galliano standards, sans fantastical theme, brooding Goth makeup and styling that requires major mental dissection to get to any given collection’s core reality. Rather, the audience of 150 settled in for a lineup of polished clothes with a breezy attitude appropriate to this increasingly important season. “It’s uptown, but not uptight,” the designer said.

An apt, if terse, sound bite, as the clothes looked both chic, unself-conscious and decidedly American. They projected an off-handed simplicity via discreetly complicated cuts with tucks, folds and draping adding volume or, in the case of the sexier dresses, fluidity without bulk. Galliano heightened the interest with innovative fabrics, often in plays of matte versus shine. He laminated everything — silk, cotton, jersey, leather — adding ample shine in liquid metallics and abstract skyline embroideries. And he laced a mostly neutral palette with quirky corals, teals and greens, inspired by the work of René Gruau.

“Gruau was a great friend and illustrator of Mr. Dior,” Galliano explained. “I really wanted to go back to the roots of Dior. Mr. Dior was one of the first designers to reinterpret what he did in France for the American market.”

Given the ever-evolving fashion calendar that’s pushing earlier and earlier — and retail demand for a constant stream of new merchandise — the cruise/resort season has taken on something approaching mythic significance throughout the industry, especially in the U.S. According to Toledano, the new Dior collection is twice as large as that of two years ago, and will account for 40 percent of total spring sales. The collection shown in July, now called simply “spring” rather than “early spring,” is projected at another 30 percent, with the October “runway” accounting for the balance.

“The [early] deliveries are so important for the U.S. market, more than any other region,” Toledano said. “Time to market is a priority in the U.S. They optimize more than in Europe. But I think Europe will follow very soon. When they get deliveries from the vendors, they will see the sales improving.”

On Monday, the reception area of Dior’s corporate offices had been transformed into a temporary workshop. Twenty atelier employees were flown in from Paris to facilitate show fittings, and they were scurrying around making final adjustments to the runway samples. “It’s been a superbly organized operation,” Galliano noted. “We came with the collection, rolls of fabrics and an extra set of buttons in case anything went terribly wrong.”

This has been Galliano’s second trip to New York in two weeks. Earlier this month, he attended the opening gala of “AngloMania: Tradition and Transgression in British Fashion” at the Costume Institute. This time, he has had scant opportunities in between fittings to enjoy the city, though he did manage to dine at the Spotted Pig restaurant and have lunch with Veronica Hearst and Jeff Koons at Hearst’s apartment.

“Having come for AngloMania, I got really inspired again,” he said. “It’s important for young kids to go and see that magnificent art of the English painters, and to show them how inspiration can actually work. Some people don’t get that an old painting can inspire this dress, a piece of music can inspire a dress. I loved the Gothic undertones.”

His affinity for Goth was more than apparent in a dazzling accessory he wore — a mammoth ring with a diamond pavé lizard wrapped around a gold skull. The ring once belonged to the poet Gabriele D’Annunzio, a lover of Marchesa Casati, who was painted by Boldini, “one of my muses,” Galliano explained. Galliano found it on a trip to Venice.

But that striking bauble du jour aside, the designer seems to have had no problem reining in his wildly theatrical side for the season, once considered the ultimate commercial opportunity. “It was really breezy and cruise-y,” he said of the creative process, noting that cruise is often a customer favorite, because its relatively low editorial presence makes it “slightly more exclusive, and ladies like that, too. Sometimes, if you see the dress over and over again in a magazine, it can put you off.”

The U.S. business accounts for 20 percent of Dior’s overall business, and with Asia, presents the largest growth potential for the company. “A lot of this growth can come organically, because we are underpenetrated in key categories like ladies’ shoes, handbags, [ready-to-wear] and fine jewelry,” Malone said. “Then we have other categories we can build on top of, like watches and costume jewelry. There is a world of opportunities.”

Accessories, she indicated, will be a major focus. Handbags are already the top sales category, said Toledano, pointing to the recent success of the Gaucho bag, and the ongoing stellar performance of Dior classics such as the Lady Dior handbag. That’s not to say that rtw will take a backseat. “After couture, ready-to-wear is the image of [Dior],” Toledano offered. “But we did a tremendous business with handbags … and shoes. And now we’re starting with men’s. The idea for Dior is to be strong in all categories.”

Dior’s own retail operations account for 80 percent of the total business worldwide, but there are no immediate plans for a major retail expansion in the U.S., where the brand currently has 22 freestanding boutiques and 22 leased areas within department or specialty stores. In North America, Dior also wholesales to stores such as Neiman Marcus, Bergdorf Goodman and Holt Renfrew.

“I think we are well positioned, and it’s important to maintain the exclusiveness of the brand, Dior’s mystique. The real volume growth will come from our own boutiques,” Malone added.

Galliano, for his part, is scheduled to leave New York today. He contemplated extending his stay for two days, but the Cannes Film Festival beckoned. Though his affection for the big city has been rejuvenated in the past two weeks, he has no plans to treat New Yorkers to some of his more theatrical runway presentations. “I will keep doing that kind of defilé and haute couture in Paris, but here we present what we believe is important to America,” he said. Could that mean he plans to be back on the Hudson in a year to present his next cruise efforts? “If you’re nice to me,” he quipped.