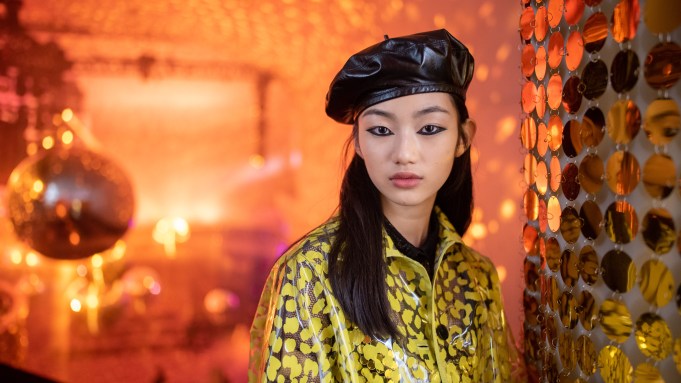 The skies in Shanghai had been gray and drizzling all day but inside of the Long Museum, taken over by Dior for its pre-fall 2021 show, guests found a brightly colored and raucous discotheque.

Monday’s event was staged in front of 1,000 guests — including Zhang Ziyi, Carina Lau, Ora Yang, TFBoys’ Karry Wang, and the pianist Li Yundi — on a circular set decked out with high-contrast leopard print and dozens of giant disco balls.

The see-now-buy-now event was also livestreamed to 126 million people on Dior’s own platforms and nine major Chinese social media channels including Tmall — though Pietro Beccari, chairman and chief executive officer of Christian Dior Couture, clarified that Dior has no plans to join Alibaba’s e-commerce platform.

Starting at 10:30 p.m., customers were able to preorder the collection, which will be available to pick up in stores in two weeks, via the Dior website and a mini-program on WeChat. A few items were available for immediate delivery, including a new medium-sized version of the Caro handbag, which is launching exclusively in China for one month.

It marked the first time the fashion house has staged a runway show for a women’s pre-collection, said Beccari, noting that Dior was the only major European brand to be included in the official Shanghai Fashion Week schedule.

“We are very excited about it,” he said in a Zoom interview from his office in Paris. “China is very important for us, and definitely this show is aimed at a public who massively love Dior. We are very happy that there appears to be this kind of fanship and followership over there, and we will use all the means possible to cultivate this friendship.”

It was also the first time doing remote fittings for designer Maria Grazia Chiuri and her team in Paris, who sat in front of television monitors and computers scrutinizing every stage of the process, down to the number of rings worn by the models. Having worked from 8 a.m. until 1 a.m. on Friday, they were feeling a little jet-lagged on Saturday morning.

“It’s a new dimension of fashion,” said Chiuri, sitting on a sofa in front of two large screens with a live audio link to Shanghai, greenlighting the final looks. “It’s very functional, honestly, because we are working very well. But it’s strange for me, because the media is different. You do your job, but you have to delegate to other people the final step.”

With its mashup of leopard print and ’50s-style silhouettes, inspired by the Dior archives, and acid-bright colors drawn from the universe of Pop Art, the collection was designed to bring fun back into fashion after months of lockdown restrictions.

“The idea was really to enjoy fashion, to give us a really positive moment. The fashion system that we grew up in is super different for everybody right now,” Chiuri explained.

“We’ve lost this idea of a community, to meet people, to share ideas,” she continued. “During fashion week, what’s important is not only the show, but what there is around it: the people that arrive in town, the exhibitions that you can see.”

The enforced isolation of the last year made her nostalgic for the ’70s, when she would visit Italian entrepreneur Elio Fiorucci’s magpie retail emporium in Milan.

“Elio Fiorucci was a really revolutionary man in fashion. He’s not celebrated enough in my view. He was the first person that went around the world to bring new ideas and to mix together a space that was much more than a simple store. It was more like a gallery. We discovered fashion at the Fiorucci store,” she recalled.

“It was the first door to go inside this magnificent world, and probably in a moment that is so depressing, it’s good to think of why you first got into fashion and to reconnect with your passion,” Chiuri added.

Beccari is convinced that in-person events are crucial to the survival of the fashion industry. “I think that fashion will not live without real events, for sure. That’s my firm opinion,” he said.

Last year, at a time when most brands were cutting costs to compensate for the impact of the coronavirus pandemic, Dior was stacking up high-visibility events in China. Beccari said 250,000 people visited the “Christian Dior: Designer of Dreams” exhibition, which opened in July at the Long Museum with a cocktail party that was the first big fashion event since the outbreak of COVID-19.

In December, the brand staged a viewing party in Beijing in the presence of local brand ambassadors for its men’s pre-fall collection, designed by Kim Jones in collaboration with artist Kenny Scharf.

The efforts paid off: Dior posted double-digit organic revenue growth worldwide in the third and fourth quarters of 2020, sharply outperforming the competition.

“I speak for myself and I don’t like to preach for others, but if you ask me if Dior had a benefit in having a real show and real events, and the benefit of the first mover, it’s my strong impression that the answer is ‘yes,’” said Beccari.

“We gained effective market share with all clientele in all markets, and we are very happy about that, and of course China was one of the drivers of this growth. It’s not a secret that their consumption started very fast and there was a kind of revenge shopping, lifting the figures of all brands, not only of Dior,” he added.

He declined to comment on the performance so far this year, since parent company LVMH Moët Hennessy Louis Vuitton is set to publish its first-quarter results on Tuesday, but it’s safe to assume Dior is on a roll, even if parts of Europe remain in lockdown.

“We see that there are parts of the world where the situation is getting better and I am moderately optimistic that starting in September, things will look better for Europe too,” said Beccari, although he does not expect a return of Chinese travelers until next year. “I see a strong wave of tourists returning in the second half of 2022.”

Nonetheless, Dior does not plan to aggressively expand its retail presence in China, where it has been present since 1994 and currently has around 20 stores. It is scheduled to open a boutique in Shenzhen this week, and another in Ningbo in May, but will focus mainly on renovating its existing locations.

“The main cities are covered for Dior and our network is pretty strong, and we’ll invest to make it even stronger where we are,” Beccari said.

The brand has seen growing online audiences for its fashion films, with its recent fall 2021 women’s collection garnering 115 million views, including 42 million on Douyin and 34 million on Miui. But Beccari sees the system as temporary.

“Real emotion comes through live events and we are a bit sick and tired of movies. We really like the real thing, and we hope for this to happen very, very soon in Europe as well,” he said.

Chiuri commissioned Giorgio Moroder to compose the soundtrack for the Shanghai show, featuring the voice of Maripol, the former art director of Fiorucci’s New York flagship, who also shot the look book for the collection. The playlist, consisting of club bangers from Diana Ross, Daft Punk and Grace Jones, was made available to the public on Spotify.

Chiuri also designed a custom outfit for the songstress Joey Yung, who performed a few hits to the crowd immediately after the runway show. The seminal rock band Black Panther followed her act with its lead singer delivering several overhead high kicks and spins on stage.

“I would like to be there with Maripol, with Moroder, all together. It’s a celebration of this idea of pop that is in our heart,” Chiuri said wistfully. “In the end, what we really desire after this pandemic crisis is to dance. But nothing special: only good music and dance.”