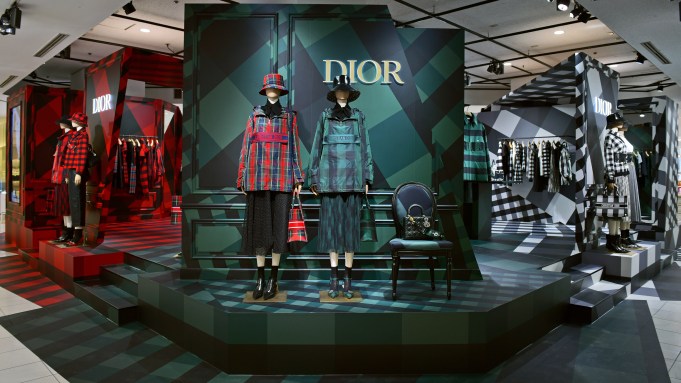 TOKYO — Dior has pulled out all the stops to celebrate 20 years of its presence in Isetan, the famed Japanese department store. Starting Wednesday, the French house covered large sections of the store in the checked patterns used in its fall women’s collection, while also installing pop-ups in Isetan’s men’s building.

The event is Dior’s way of not only feting a longstanding relationship with one of the world’s top retailers, but of also paying homage to its founder’s deep love for — and connection with — Japan.

“Christian Dior always took a great interest in Japan. He admired Japanese women and their way of expressing their femininity, which he saw as a mix of tradition, grace, and refined and profound intelligence,” said Maria Grazia Chiuri, Dior’s creative director. “I have great respect and curiosity for Japan. I love its culture and artists and am fascinated by Japan’s unique textile tradition.”

Dior’s takeover of Isetan consists of over a dozen different pop-ups, corners and specially installed displays. It starts before customers even enter the store, with a series of large-scale advertisements on the building’s facade. There is also a double-decker bus wrapped in red and black tartan and Dior’s logo, making loops between Isetan and the brand’s flagship stores in Ginza and Omotesando.

Once inside the store’s main building, the largest pop-up is prominently located in the center of the ground floor. Decked out in the black and red, green and black, and black and white checks from Chiuri’s fall collection, it stocks select styles from the collection, as well as pieces that are available exclusively at Isetan. For the occasion, Chiuri created a new tartan — a pattern with special significance, as other versions have graced the department store’s shopping bags for years. The classic motif in red, navy and green is used in an exclusive capsule collection, which includes two sizes of Dior’s Book Tote, an anorak jacket, two styles of pumps, a sneaker, bracelets, scarves and a bucket hat. Only limited numbers of each style were produced, and they will not be sold anywhere else in the world.

“I have always admired the way Japanese women dress: the freedom with which they mix different pieces without preconceived notions and manage to achieve extraordinary results,” Chiuri said. “When it comes to style, they have their own unique creativity. That is why, for the Isetan project, I selected a series of pieces from my last collection. Pieces that are Dior icons and a manifesto of my vision, to give Japanese women the freedom to put them together however they see fit, according to their unique taste and their own creative fashion sense.”

The Book Totes can be customized with the customer’s name or initials “to give each woman the chance to invent her own, highly individual look,” Chiuri said. “Tokyo is a unique city, with different layers of time and ages overlapping in a mix of signs that are so different from each other. It’s a great source of inspiration for fashion and for me, and the perfect setting for this special Dior project.”

Other pop-ups have been installed in the first-floor handbag department and the second-floor shoe department. Pillars, escalator handrails and a corridor are also covered in the different colors of checks, and there is a special Baby Dior display on the sixth floor. Dior’s newly renovated women’s and baby boutiques within the store are stocking the fall collection ahead of anywhere else in Japan. And starting Saturday, a pop-up on the fifth floor will be dedicated to Dior Maison, a line that is not normally sold in Isetan.

But the event is not limited to Isetan’s main building. In the adjacent men’s building, Dior has a ground floor window and pop-up dedicated to Kim Jones’ ready-to-wear and accessories, pre-launched at the store. The collection celebrates such signature prints as Dior Oblique and Toile de Jouy, which also adorns the pop-up itself. An exclusive version of the brand’s Roller bag is available only to Isetan shoppers, and a new personalization service allows customers to customize their B23 sneakers for the first time in Japan. A smaller pop-up on the third floor of the men’s building showcases other items in Jones’ fall collection, created in collaboration with the American contemporary artist Raymond Pettibon.

“The Toile de Jouy inspiration comes from the start of Monsieur Dior, as it was on the wall of his first store on Avenue Montaigne. Since my first collection for Dior, I continue using this iconic pattern that now will dress also the walls of the Isetan pop up and will serve as a showcase for a selection of ready-to-wear patterned with the same print, in shades of gray and black,” Jones said.

Christian Dior’s affiliation with Japan dates back to the early Fifties. The house staged its first fashion show in Tokyo in 1953, and in 1959 Empress Michiko chose a Dior dress for her wedding. The timing of the Isetan celebration is made even more significant by the fact that her husband, Emperor Akihito, earlier this year became the first Japanese emperor in more than 200 years to abdicate the throne. The couple’s son, Naruhito, became the current emperor on May 1, and his official enthronement ceremony is planned for Oct. 22.

“The house of Dior has a deep and meaningful history in Japan. Christian Dior was fascinated by this incredible country, examining its culture of dress and utilizing this study to inspire his own work,” Jones said. “I have the same feeling with Japan. I come here often to find inspirations for my collections. I’m very excited to have also this new men’s pop-up in Isetan to celebrate the 20th anniversary of Dior’s presence in the heart of this department store. Dior and Japan will always have a strong connection.”