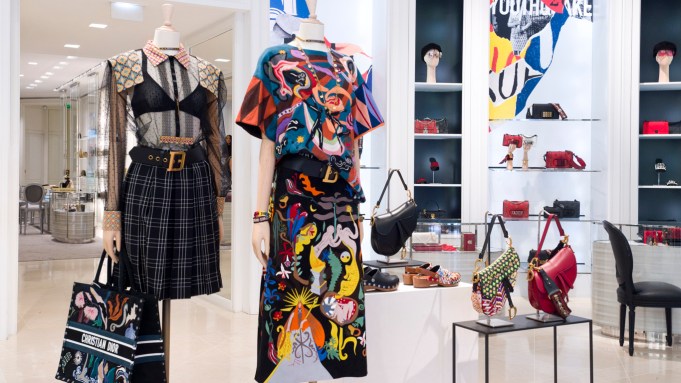 To mark the launch of Maria Grazia Chiuri’s fall collection, inspired by Sixties youth culture, Dior has encased its Paris headquarters at 30 Avenue Montaigne with the colorful collage that served as the backdrop for her ready-to-wear show in February.

Among the torn images, culled from the protest and feminist posters of the May 1968 student uprising in France, are phrases such as “Women Empowerment,” “Youthquake” and “C’est non, non, non et non!” — a slogan that appeared originally on a Miss Dior scarf, but has a particular resonance in the #MeToo era.

“It was a moment of great change, and this is also a moment of big change, so the reference is because in ’68, like now, the young generation sent us a message. We have to listen to them and understand what they are really saying,” said Chiuri, who has championed a feminist agenda since joining the house in 2016.

Also in the patchwork of images is an archival photo showing a woman demonstrating in London in the Sixties brandishing a sign proclaiming “Dior Unfair to Mini Skirts,” an early example of a female consumer expressing dissatisfaction with the status quo, Chiuri noted with amusement.

Talking about the company’s women’s business for the first time since taking the reins in February, Dior chief executive officer Pietro Beccari said the house plans to roll out a similar decor in another nine locations worldwide from July 19, with six stores in China to follow from Aug. 20.

The locations include the Dior flagships on 57th Street in New York, Beverly Hills and Washington, D.C.; the towering House of Dior store in Seoul; as well as boutiques in Beijing, Shanghai, Hong Kong, Singapore and Tokyo, among others. Merchandising displays will reprise elements of the external decor.

“It’s a statement, because we believe that we have a very strong collection and we wanted to do so in complete harmony and coordination with how the inside of the store will look like, and especially how the campaign is going to look like,” Beccari said.

The brand is launching an advertising campaign that represents a departure from its previous aesthetic. Shot by Pamela Hanson, the images inspired by the cult French New Wave film “A Woman Is a Woman” feature models alongside random snatches of dialogue from Jean-Luc Godard’s film, shown as subtitles.

“I really believe in narratives,” Chiuri said. “The sentence gives the picture another attitude. It also helps you to reflect.”

The designer was especially drawn to some of the dialogue of Angela, the female heroine played by Anna Karina, including the line: “I’m not trying to please anybody.” Rather than simply showing off the clothes, the models were asked to embody the values of irreverence, sisterhood and pride.

“There is this new generation of girls that are really strong and empowered. They are very confident to express themselves. It’s a fantastic generation,” Chiuri marveled of the models, which include the brand’s muse, Ruth Bell.

In a third prong of the strategy, Dior is relaunching its cult Saddle with 15 new styles in a coordinated drop worldwide on July 19.

“In this period of the life of fashion, you have to speak very loudly to be heard, and I think that’s our way to do it, with the launch of this very important bag that is the Saddle bag,” Beccari said. “We already have hundreds, if not thousands, of requests from people who already pre-paid the bag in order to have it.”

The Saddle was originally designed in 1999 by the house’s then-creative director, John Galliano, and became a bestseller of the early Aughts, appearing on the arms of celebrities and in the TV series “Sex and the City.” In recent years, vintage Saddle bags have found newfound favor with Millennials who see them as nostalgic icons.

Chiuri has revisited the bag in two formats, available in monochrome leather, in Dior’s Oblique logo canvas, and in a retro patchwork with the inscription “Peace and Love Dior.” The designer has also come up with a new way to wear the bag, by adding a wide cross-body strap embellished with fringing and metal pieces.

“The first signs of excitement make us think that it will be soon out of stock,” Beccari said. A limited-edition version of the bag will go on sale at Harrods in late July at a pop-up space at the London department store celebrating the revival of the Oblique under Chiuri’s creative direction, he added.

The fall campaign is the latest sign of how the former Fendi executive is shaking up the house, eager to bring more energy, color and irreverence to Dior. One of his first moves was to hire Kim Jones as men’s wear designer, and he has even changed the art lining the gray walls of the headquarters, opting for more vivid and lively works.

“I think it’s important that in the future we communicate more and more,” Beccari said.

“People today don’t want just to come to the store and buy a product. They would like to approach a set of values that the brand represents: aesthetic values or, in the case of Maria Grazia, the stand that she took for women all over the world, and not with suspicious timing, because she was the first, even before the [Harvey] Weinstein case, to do so,” he added.

Beccari noted that the colorful facade, which went up at Avenue Montaigne this week, was catnip for Instagram. “That’s another way to be very visible, on top of having thousands of people passing by: to be present on social networks,” he said. “It’s very photogenic.”

Chiuri said bringing the show decor to the masses was part of a more inclusive approach in tune with the requirements of social media.

“In the past, sometimes, we worked in fashion too much with the idea to impose our style, and I think that’s completely wrong,” she explained. “Fashion has to be a dialogue, a dialogue with your audience. You have a dialogue with the collection, but at the same time also with the campaign, with the store and…in new media.”

She said the speed of social media meant designers have a greater responsibility, since they are no longer speaking to a small group of insiders, but to a global audience.

Half a century on, the social unrest that swept through France in May 1968, upending social norms and sparking an upsurge of creativity, continues to fuel imaginations. Sonia Rykiel recently launched a bag dubbed the Pavé, in reference to cobblestone-hurling protesters, while Gucci’s pre-fall ads depict students staging a protest on a university campus.

Chiuri said, in referencing the period, she hopes to tap into Millennials’ wokeness, but also their sense of fun. “It’s very important that they see fashion as a playful place where they can dress like they really want, with their style and with great freedom. I think 1968 was all about freedom,” she concluded.