WWD takes a look back at the fashion house's couturiers over the years. 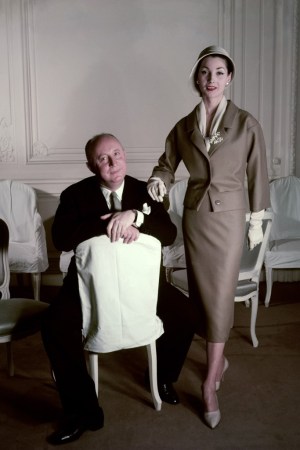 WWD takes a look back at the fashion house’s couturiers over the years.

Dior set the fashion world ablaze with waist-cinching, fan-skirted dresses that became known as the iconic New Look and inspired a desire for a new glamour in the post-World War II world. With a global reach and set of licenses, Dior set the template for the modern fashion empire. The Duchess of Windsor, Marlene Dietrich and Princess Margaret were among those who embraced his designs, from his expert hand with crinolines to new ideas ranging from the Oval line in 1951 to the Cupola in 1953 and the H line in 1954. Dior designed just 22 collections, and died while on vacation in Italy in 1957.

A disciple of Dior, Saint Laurent was thrust into the fashion spotlight when he was named as the designer’s successor. His first show in January 1958 featured short and swingy silhouettes with narrow shoulders and a knee-length hemline he called the Trapeze line, signaling Saint Laurent’s intent to inject Dior with a lighter spirit and youthfulness. Generally well-received, his fourth collection with so-called hobble-skirts well above the knee stunned the world, and some of Dior’s more conservative clientele deemed his designs too extreme. Saint Laurent’s fall 1960 collection, his last for Dior, paid homage to the Left Bank intelligentsia and was ill-received. Broussac quietly started to search for a successor, and Saint Laurent was called upon to serve in the French Army in the Algerian war.

The longest serving couturier at Dior, Bohan was a quiet type who largely shunned the limelight. He set out to create clothes for real women, and had a conservative touch. His most memorable collection, in 1966, took its cues from the film “Doctor Zhivago” with Russian-inspired coats. Even if his clothes lacked the excitement of his predecessors, Bohan brought a solid client base that included Elizabeth Taylor and Princesses Grace and Caroline of Monaco to the house, but his most famous design was probably the wedding gown he created for the Farah Diba Pahlavi, the Empress of Iran, in 1967.

As an Italian at the most iconic Paris couture house, Ferré’s hire ruffled quite a few feathers, but the designer set out to take the house back to its glory years of Dior himself, and he eventually managed to charm the French. His collections celebrated the dandy one season, Renaissance another, and snow queens the next. If fashion critics didn’t wholeheartedly embrace Ferré, Paloma Picasso, Princess Diana, Bernadette Chirac and Marie-Helene de Rothschild were among his clients. In the early Nineties, however, the house remained in the red, and Ferré and Dior parted ways in 1996.

Shocking, thrilling, theatrical and wildly creative are just some ways to describe Galliano’s Dior. By turning the house’s codes on its head, Galliano catapulted the brand into fashion’s big league, though not without his share of controversy. His 2000 “Tramps” collection, inspired by homeless people, enraged homeless groups, and after a show featuring a train pulling into the Gare d’Austerlitz, he was said to have been ordered to rein in his extravagances. Galliano’s hand for bias-cut silhouettes and the extreme Kabuki styling gave Dior a distinct aesthetic, and the brand’s ready-to-wear sales more than quadrupled under Galliano. The designer, however, was struggling with addiction, and was fired after a scuffle and anti-Semitic outburst in a Paris cafe.

Galliano’s co-conspirator for 23 years, Gaytten was thrust into the spotlight after Galliano’s ouster. Gaytten was faced with the challenge of creating collections while largely being considered an interim designer by the industry, and his subdued collections — at least by Dior standards — reflected this, even if he received some encouraging reviews and traction at retail. Gaytten paid homage to the core DNA of the house with references to the New Look, and while his often pretty clothes had commercial appeal, they lacked the excitement to propel the brand forward.

The house names Raf Simons artistic director of haute couture, women’s ready-to-wear and accessories collections and his first collection will be presented during Paris Couture Week in July.