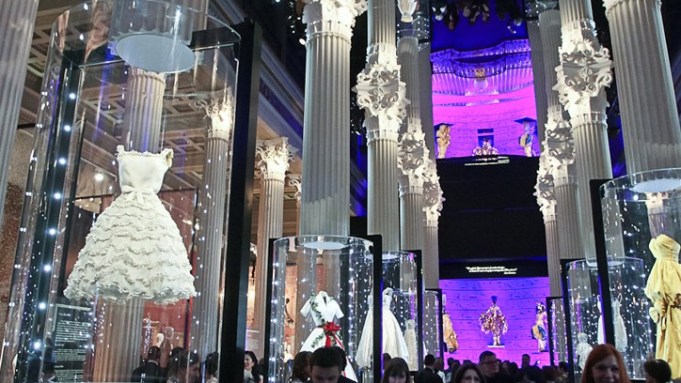 MOSCOW — Natalia Vodianova swished up the stairs at Moscow’s Pushkin Museum Tuesday night, dressed in a dark red lace Dior gown circa 2010. Her eyes were wide as she looked upon the gowns and paintings that comprise the museum’s “Inspiration Dior” exhibit, which opens to the public today. “It’s such a gift to Russia,” she gushed to curator Florence Muller.

Vodianova was one of 330 guests who toasted the opening of the exhibit, which already has wowed Russia’s most traditional art lovers and silenced cynical critics. Filling one of Moscow’s grandest museums with 120 couture looks from the house’s long history, alongside paintings and photographs that have inspired its designers, Christian Dior, in one of its most ambitious exhibits in its 64 years, has breathed new life into Russia’s often conventional arts scene.

“I’m sure many of the designs you see here will enter history,” said Irina Antonova, the Pushkin’s 89-year-old director. “The time is close when the dresses of the 20th century will also appear in museums. Our exhibit is one of the steps towards having that happen.”

The opening drew several members of Russia’s elite, who have taken to collecting art in recent years with a relish they once saved for more banal acquisitions like oil firms and coal mines.

Steel tycoon Alisher Usmanov — Russia’s fifth richest man and the 35th richest man in the world according to Forbes — toured the halls with his wife Irina Viner. “This exhibit is a great way to say that France and Russia are two friends,” he said.

LVMH Moët Hennessy Louis Vuitton chief Bernard Arnault addressed the crowd: “What we wanted to show above all with this exhibit is that Christian Dior is an artist,” he said. “He wasn’t only a fashion designer, but also one of the greatest artists of the 20th century.”

Arnault swept through the exhibit flanked by security, leaving other guests to examine the rare artwork — including portraits of Marie-Antoinette, the Duke of Orleans and the wife of Russian composer Nikolai Rimsky-Korsakov.

In the exhibit’s central hall, guests swarmed around eight glass tubes suspended from the Pushkin’s ornate ceiling. Each tube holds a unique Dior creation. Vodianova, like many guests, was particularly taken with a short white tulle evening dress, embroidered with silver sequins. Designed by Yves Saint Laurent for the autumn/winter 1959-60 collection and titled Armide, it glowed like a centerpiece. “It’s extraordinary,” Vodianova said.

Another highlight is John Galliano’s Mitzah evening gown from the spring 1997 line, its pink ruffled skirts spilling onto the museum floor, accented by a swathe of lilac roses.

The exhibit, which runs through July 24, was three years in the making. Borne of a meeting between Antonova and Arnault, it took months of appealing to private collectors and museums like the Pushkin to display some of their rarest works. Dior called upon more than 100 people to fly to Moscow to work on the exhibit. “It’s like a movie production,” said Muller.

Guests poured into the exhibit’s most theatrical room, devoted to Dior’s global inspiration and collected around four regions: the Far East, the Hispanic World, the East and Russia. Decorated with eclectic art — from a Matisse triptych and a manipulated photograph by Iranian artist Shirin Neshat to Russian avant-garde classics by Malevich — the gowns and paintings swirl around a central angel-like figure. She wears a white tulle dress by Galliano and golden crown, lace wings adorning her back — a textile take on Pierre et Gilles’ Madonna, which hangs high on the exhibit’s wall.

Jacques Ranc, the exhibit’s artistic director, liked to point visitors to Cezanne’s “Femme nue debout,” a rarely seen work by one of Dior’s favorite artists, usually hidden away in a private collection in New York. Other artwork includes works by Toulouse-Lautrec, Pierre Bonnard, Man Ray, Gustav Klimt, among others.

A particular hit among Russian guests was a room devoted to Dior’s love of perfume. An installation by contemporary artist Olga Kisseleva forms its center, with hanging glass bulbs reminiscent of perfume bottle designs. The edgiest posters from Dior’s long history with perfume line the walls, and the golden gown worn by Charlize Theron for her work with Dior’s J’Adore stands in a glass case.

After Champagne, guests moved over to the Pashkov House, an 18th century palace overlooking the Kremlin. The 40 top international clients that Dior flew in for the event mingled with Russia’s beau monde over caviar and chocolate. Jocelyn Wildenstein said hello to oligarch and media tycoon Alexander Lebedev, decked out in beaded bracelets after a recent holiday and still unwilling to take off his sunglasses. Korean actor Kim Tae-hee sat quietly and played with her bejeweled smartphone.

Clients from Qatar and the Emirates took cigarette breaks in Moscow’s newly warm spring air. For many, it was a first visit to Moscow and they said they hoped to return. As Arnault said: “Christian Dior is the best way to transmit the values and culture of France. He’s an ambassador.”