Gloria Gaynor, Grace Jones, The Pointer Sisters, Sister Sledge and Chaka Khan took to the stage as models sashayed by in looks from the collection.

By Katya Foreman and Joelle Diderich on January 24, 2012
View Slideshow 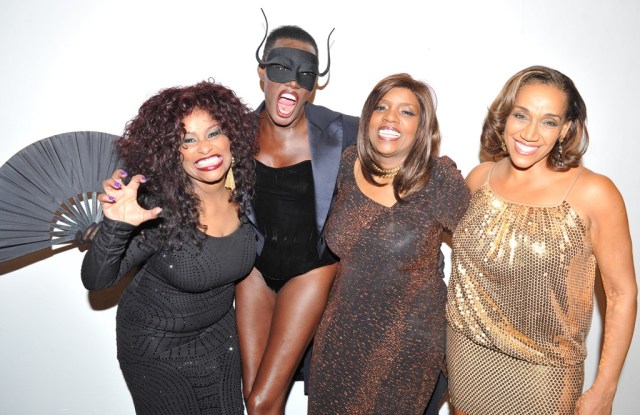 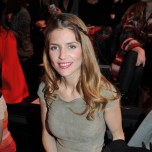 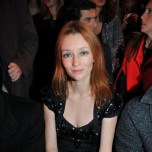 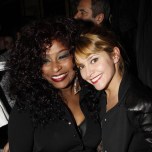 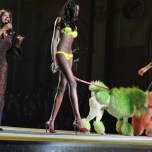 DISCO INFERNO: Talk about girl power. Etam on Monday night assembled a formidable league of disco divas to provide the entertainment at its spring lingerie show, held at the Ecole des Beaux-Arts in Paris. Gloria Gaynor, Grace Jones, The Pointer Sisters, Sister Sledge and Chaka Khan took to the stage in succession to belt out classics as models sashayed by in looks from the collection. Designs went from feminine pink retro lingerie sets with high panties and garter belts, to gold bathing suits. Neon-dyed poodles accompanied girls in hot colored lingerie ensembles, while models in darker looks, such as a crystal studded black swimsuit, had snakes coiled around their shoulders.

Jones opened the show with “La Vie en Rose,” albeit a little later than scheduled, having reportedly gone AWOL for some time backstage. “She did the same thing at a Louis Vuitton show in Tokyo five years ago: She disappeared and then reappeared. What counts is that she reappears,” laughed Antoine Arnault, who listed Gloria Gaynor and The Jackson Five among his favorite disco acts as a kid. “It kind of stopped there, then I woke up [a few years later] to Coldplay and Radiohead,” he said.

Alice Taglioni declared that Gaynor rocks. The French actress chatted about her experience meeting Woody Allen on the set of Sophie Lellouche’s “Paris Manhattan,” in which the legendary director has a cameo role. “He was great, really simple and generous. He agreed to do this for the first film of a young French director — he’s a real supporter of young talent,” Taglioni said, adding that Allen was in Paris for a few hours only for a jazz concert, but freed up an hour to shoot the scene at the Plaza hotel.

“Grace Jones,” yelled Annabelle Dexter-Jones, when asked about her disco heroes. The young hipster said she plans to present her capsule clothing line for Faith Connexion to buyers in New York in February, and is working on a short film that will be screened at the official launch of the line during Paris Fashion Week in March. “I took really classic pieces and put my own stamp on them and played with proportions a bit. I was really concerned with details and quality,” she said.

French actress Cécile Cassel said she recently wrapped director Hugo Gélin’s feature “Comme des Frères,” co-starring Mélanie Thierry and Nicolas Duvauchelle, but would not elaborate on her role. “Unfortunately I can’t tell you anything, because you discover it gradually,” she explained. Cassel is also recording under a pseudonym — she performs under the stage name Holly Siz. “It’s my musical avatar,” she said with a smile.

Arnault set off a flurry of flashbulbs by posing happily with his girlfriend, Etam ambassador Natalia Vodianova, whose spring-summer Natalia for Etam range was presented at the show. Though the two have been quietly dating for a few months, they had been careful not to be photographed together.

Led by Sister Sledge, the event culminated with a collective rendition of “We Are Family,” with all of the night’s acts coming on stage to sing together.