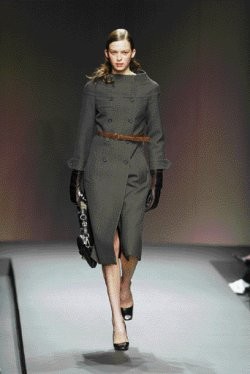 Prada: Sometimes, discretion is the better part of fashion. One could certainly make that claim about the exquisite fall collection Miuccia Prada showed on Friday. Except there’s nothing discreet about the way Prada senses, acts on and then dumps a mood before everyone else, leaving others to revisit her abandoned turf.

With so many others now mining Mod, Prada wouldn’t go near it. She went there, did that last season, and, as usual, moved on, this time to a place more grounded than the retro future. The girl of her fall reverie is hardly the type to get lost in the Space Age; her pragmatic core favors a more subtle style. But then, who ever said that common sense was antithetical to style?

Certainly not Prada. She revels in taking the banal and making it anything but. After all, it was she who turned geek into chic back when. For fall, she set her audience up for a Fifties romp, opening with a stunning, belted black coat with a boatneck and three-quarter sleeves. But ultimately, the mood transcended retro in a celebration of refinement and calm.

It all started with the coats, belted and cut on the loose in fur, croc, subtle tweeds. How magnificent? If a girl can’t find a cozy up in here, she should pack up and move to the tropics. Throughout, Prada stuck with relaxed proportions — collegiate argyle sweaters over skirts; slightly slouch pants — veering from her loose-is-more attitude only for curvy silk Kim Novak dresses. The gentle attitude extended into evening, with dresses delicately pleated and twisted, and to accessories, with low-heeled boots and demonstrative gloves worn for show, of course, but also to make sense of short-sleeve winter coats. A witty touch, even if one editor dubbed them “Freddy Kruger gloves” because of their industrial-strength proportions. No matter, they looked great.

The entire collection radiated intelligence and chic, even as Grace Jones blared over the soundtrack, “I’ve lost control. I’ve lost control again.” We don’t know about Grace, but Prada out of control? Not a chance.

Gucci: Not all of the drama at Gucci goes on behind the scenes. In the fabulously audacious collection he presented on Saturday, Tom Ford proved himself once again a master of the fashion sexcapade. The theme of sex underlies all of Ford’s work as a designer, and seldom hides far from the surface. The question is not whether, but how, he will express his Gucci woman’s sexual daring.

For fall, he did it by conjuring the spiritual sister of the Eighties’ glam goddess. She flaunts a slight “Blade Runner” edge and an undercurrent of Dietrich-esque paradox to her beauty look — small, tightly twisted hair, her face to the startling side of pale, with brows powdered into temporary oblivion. Before the show, Ford described the collection as, “romantic in a cinematic way.” Certainly the runway strewn with a zillion white rose petals suggested that a kind of gentleness would follow. Instead, out came fabulous, bold clothes for a woman who wouldn’t turn soft in a sea of satin, and should her romance arrive with a bit of bondage, all the better.

For this woman, provocation is not an evening pursuit but a 24-hour calling. By day, she struts in coats with grand, face-framing collars and full sleeves, their volume constricted by wide corset belts. When the coats come off, the dominant shape, the only shape — skinny, skinny, skinny. Ford chopped his corset coats into countless jackets, sometimes with contrasting fur sleeves, over super-tight skirts, lengthened to the knee after spring’s more lighthearted, micromini Asian extravaganza, or with equally lean pants, extra-long and side-slit to extend over the shoes. And while on the topic, Ford’s white pumps — dangerous; his over-the-knee anaconda boots, that’s right, anaconda — worthy of one little act of grand larceny.

By night, the inclination toward innerwear blossomed into full-on obsession. Corsetry and elaborate lingerie seaming — much of it hand-worked — dominated skirts, dresses and goddess gowns (not, Ford assured, an ode to the upcoming benefit at the Metropolitan Museum of Art, of which he’s a chair). He spliced, ribbed, grommeted, laced and tied up to fever pitch, often working in alluring asymmetry. And if it looked a bit one-note, the woman who can carry the tune will surely seduce her target audience.

Of course, there are all types of seduction. Even while playing so astutely to the needs of his mythical Gucci woman, Ford’s got some targets of his own to woo. He acknowledges that critics still question his ability to give equal attention to Gucci and Yves Saint Laurent. As most of those naysayers feel he focuses on the fledgling (relatively speaking) Saint Laurent, he is determined to prove them wrong. With its intricate cuts and moody, voluptuous swagger, this collection should end the debate.

Dolce & Gabbana: Dressing down means different things to different people. Take, for example, Dolce & Gabbana’s mythical Sicilian bombshell, a girl who decks herself out to smolder by day and ignite by night. For her, the notion of dressing down presents a challenge: how to relax and look au courant, without renouncing her seductress heritage.

This season, Domenico Dolce and Stefano Gabbana have hit upon the perfect solution. “The idea of techno mixed with romance makes us dream even more,” Gabbana said before the show. “We’ve taken ideas from the street and made them our own, made them sexy.” And what better way to show how sexy than with a supermodel moment? They enlisted Naomi, Amber, Eva and yes, Linda, to strut their stuff. But first, they stressed the techno part of the equation by junking the typical trappings of romance that usually decorate their show tent, opting instead for a big, bold video screen that would project images throughout the show. Not the best move, because even as Posh Spice sat in the front row in all her cleavaged, bejeweled, silver-sunglassed glory, it blocked her from the view of much of the audience. But hey, we all know technology has its drawbacks.

It has its upside, as well. For one, it allowed the designers a new avenue for expression. They have always been of the mind that clothes exist not to provoke deep thoughts, but to help people look and feel great, and oh, yes, have fun. What girl wouldn’t have fun in a puffy pink, white and black parka buckled to the nines and thrown on over a little babydoll? Or in a yellow faux feather-real mink coat in bright yellow, the better to recapture the Mrs. Big Bird fantasy of her childhood?

Of course, these guys are not only spirited, they’re also smart, which is why their clothes are performing so well at retail. They know how to tone down the volume to accommodate the customer. And if this time out, the show lacked the typical verve and giddiness one has come to expect, it still offered plenty of strong clothes. For every Michelin Man-on-Mars jacket and snap-it-on/snap-it-off fur coat, a girl can find all kinds of calmer delights: terrific men’s wear-inspired suits, many with new, loosely-cut short jackets; bad-girl jeans; flimsy, flower-child tops.

At night, she can channel her inner Roxie Hart in a fringed flapper dress or a dreamy silk-and-crystal bias gown — one of 13 special one-of-a-kind gowns. It seems that dressing down at Dolce & Gabbana still has its limits.