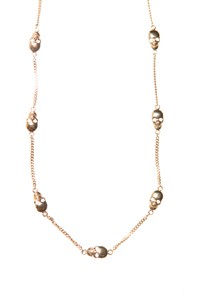 Disney Couture Jewelry and Judith Leiber will launch accessories inspired by the sequel to “Pirates of the Caribbean: The Curse of the Black Pearl” that use materials such as gold and Swarovski crystals. The introduction is part of a wider effort by Disney Consumer Products, the branding division of Walt Disney Co. responsible for its apparel, footwear and accessories, to target goods to a more high-end, fashion-forward audience.

“Three years ago, we started working in high-end, trendy pieces in apparel with the Disney Vintage and Disney Couture lines,” said Donna Sheridan, general manager and vice president of North America for Disney Consumer Products. “The lines were so successful that we thought accessories would be a natural extension.”

Disney first extended its brand into accessories, tapping Los Angeles-based Lucas Design International, which also has exclusive accessories licenses with Playboy and Rocawear, to create jewelry. Disney and Lucas rolled out Disney Couture Jewelry and Kidada for Disney for the holiday 2005 season.

Disney Couture Jewelry features 14-karat gold-plated and silver necklaces, rings, bracelets and earrings that loosely interpret Disney characters such as Bambi and symbols like cartoon mushrooms, at prices from $48 to $250. It sells at Nordstrom on the West Coast, among other retailers.

Kidada for Disney was created in collaboration with designer Kidada Jones. It is available in costume and fine jewelry, with abstract interpretations of Disney motifs, like Sleeping Beauty’s bow, in materials such as 18-karat gold with semiprecious stones or diamonds. The line retails from $199 to $1,499 at retailers that include Fred Segal in Los Angeles.

This month at the JCK jewelry trade show in Las Vegas, Disney and Lucas also unveiled Walt Disney Fine Jewelry, offering limited-edition renditions of characters such as Tinker Bell, Mickey Mouse and Bambi in 14-karat gold with semiprecious stones or diamonds. Prices for that line, which will be at Fortunoff in August, range from $199 to $1,500.

Judith Leiber is the first luxury handbag collaboration for Disney. The New York accessories brand will introduce the Judith Leiber for Disney collection featuring limited-edition Swarovski crystal handbags accented with its interpretation of characters including the Chesire Cat and the Queen of Hearts. The collection, with prices ranging from $795 to $4,995, will bow this holiday in Judith Leiber boutiques, high-end department stores and specialty retailers.

Judith Leiber’s “Pirates of the Caribbean” bag is a preview of its Disney collection. The creation of the bag evolved through the company’s interest in dressing the film’s heroine, Keira Knightley, for her red-carpet appearances to promote the film, alongside co-stars Johnny Depp and Orlando Bloom. There is no confirmation on whether the actress will carry the bag, which is designed around the skull and crossbones. It will retail at Judith Leiber’s four stores in New York, Las Vegas, Atlanta and Costa Mesa, Calif., for $4,495 beginning in November.

“It’s an unusual collaboration, and I think that’s what makes it interesting,” said Frank Zambrelli, Judith Leiber’s creative director. “We’ve all grown up with Disney, and there are sentimental attachments to the films that last forever. But a luxury customer is not buying vinyl backpacks. So we are taking what we do and making it the basis for the line. Disney is usually protective of its character properties, but they have been going forward with a very open mind about the possibilities.”

The Disney Couture “Pirates of the Caribbean” jewelry collection will be in stores such as Fred Segal and Kitson in Los Angeles, and Nordstrom, as well as the disneyshopping.com Web site, in conjunction with the film’s release. The collection, with a price range of $75 to $250, comprises 35 pieces, like rings formed of bent swords, pendants inspired by locks or keys and delicate chains interspersed with antique pistols.

The collection also features a variety of silver or gold skull rings created by Joel Harlow, the makeup artist on the film. The limited-edition rings were inspired by one he had custom-made after the first film to commemorate the experience and which was copied by members of the cast and crew. Disney Couture’s “Pirates of the Caribbean” by Joel Harlow will retail from $150 to $1,500.

“When I began designing the line, I wanted to approach the collection with a fresh way of doing pirates’ jewelry,” said Shelley Gibbs, the designer at Lucas. “I looked closely at the film’s characters and props to find hidden fashion potential that the consumer would enjoy. Every time I approach a Disney Couture line, I want to take something from Disney and give it to people in this fashion-forward way.”

Disney’s Sheridan said she envisions a long-term future developing the accessories because there is so much great existing content and new projects at the company.

“If you look at the marketplace and what’s happening, everyone is making things cooler and more appealing,” Sheridan said. “There’s less delineating these days. The relevant mom might shop Target and then shop Fred Segal, and Disney absolutely has a place in that.”

Sheridan would not comment on financial growth with the accessories additions, but said that its soft goods line, which includes all apparel, footwear and accessories, had a volume of $200 million last year.