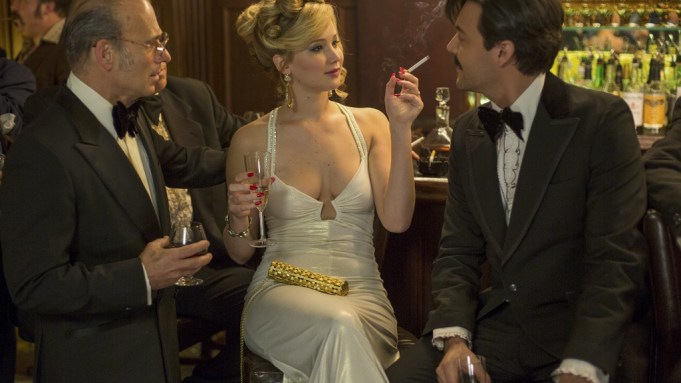 “Halston, Gucci, Fiorucci.” That single line from Sister Sledge’s song “He’s the Greatest Dancer” immortalized the three brands as the ultimate of Seventies fashion. It makes sense, then, that two of them — Halston and Gucci — have a significant presence in “American Hustle,” the much-anticipated film starring Christian Bale, Amy Adams, Bradley Cooper and Jennifer Lawrence, which opens in New York and Los Angeles on Dec. 13.

Directed by David O. Russell, who also directed “Silver Linings Playbook” and “The Fighter,” the movie, set in 1978, tells the story about Gotham’s world of con artists, mobsters and political power brokers, inspired by the FBI’s Abscam scandal. It also tells the story of the era’s style. While the many scenes with Cooper in hair rollers scream Seventies fashion cliché, the costumes are far from it. Rather, “American Hustle” speaks to the decade’s more sophisticated, sensual edge, especially evoked by Halston’s plunging neckline-blouses and twist-front jersey dresses (the irony that much of it reads early Tom Ford-Gucci is not lost). The sentiment extends to the accessories; in one scene, Adams sports a Gucci signature python Bamboo Lady Lock handbag. She also wears a Gucci gold horse bit necklace, earrings and bracelet, and high-heeled platform loafers, as well as oversize vintage Christian Dior sunglasses and Charles Jourdan disco shoes.

Costume designer Michael Wilkinson felt particularly drawn to the script for the multifaceted nature of the four key roles. “It is about characters doing everything they can to survive,” Wilkinson says. “That included constantly reinventing themselves and dressing as the people they are aspiring to be. We have lots of different demographics. We have the high rollers of Manhattan. There’s Long Island and New Jersey. They are all across different backgrounds, and try to keep their head above the water in different ways. The clothes seemed so central to telling the story.”

Case in point, Adams’ character Sydney Prosser, who fakes a posh British accent and tricks the unassuming out of their money. “Amy’s character was fascinating to me because she goes on such a trajectory through the film,” Wilkinson says. “We see her arriving in Manhattan. She is a girl from a small town. She has a past that she is trying to bury. She meets a man, falls in love and is given the confidence to reinvent herself in such a head-to-toe way. She starts exploring the designers she has access to.”

“We wanted there to be a freshness to the clothes,” Wilkinson notes. “Sometimes when you use clothes solely from a period, and these are all almost 40 years old now, it’s hard to get the freshness and the right feel. Although we tried to use as many authentic pieces as possible, we also used a few more contemporary pieces and built quite a few from scratch.”

Lawrence’s character, Rosalyn Rosenfeld, struck a note with Wilkinson for different reasons. “We see her having such violent mood swings,” he says. “She is a very passive-aggressive, manipulative character. She lives in suburbs on Long Island, and I wanted to capture that mood. When she is bored and frustrated at home, she’s in jumbo-printed caftans, muumuus and house dresses. We also see her out on the town, dressed to kill to get her husband jealous.”

Lawrence’s eveningwear includes a vintage leopard-print chiffon halter-neck number by I. Magnin and a white metallic, rhinestone-strap dress created by Wilkinson in “a size too small and very clingy and revealing,” he says. “Jennifer is very intuitive. She is the sort of person who can look at two racks of clothes and pull out the one or two pieces perfect for a scene.”

As for the male leads, Wilkinson dressed them in vintage (mostly brandless, plucked from rental shops) and some new custom looks. Bale, almost unrecognizable as the lead character Irving Rosenfeld, has no shortage of paisley ties, striped shirts and spotted ascots, while Jeremy Renner, who plays a New Jersey mayor, speaks to a different aesthetic of the era. “He is from a wholesome background,” Wilkinson says. “He has a Sinatra-esque appeal where he is dressing in pale-colored suits. He has these statement ties and a fastidiously groomed pompadour hairstyle.”

Cooper’s transformation from FBI agent to con-man collaborator is perhaps the most notable. “He starts as a pretty straight-down-the-line, black-and-white FBI kind of guy, with polyester suits and garish ties,” Wilkinson notes. “He meets Irv and Syd, and a whole new world and different way of thinking opens up to him that is more sophisticated and nuanced. Suddenly, he wears a leather jacket. He has a groovy pair of sunglasses. He buys a sports coat with Western styling. He wears a silk scarf to Studio 54. He explores the power of clothes and how they influence the way people think of you in the world.”

Four decades later, fashion can still have that impact, even if the collars are shorter and the lapels thinner. As Wilkinson puts it, “I like the idea of using clothes to express ourselves.”