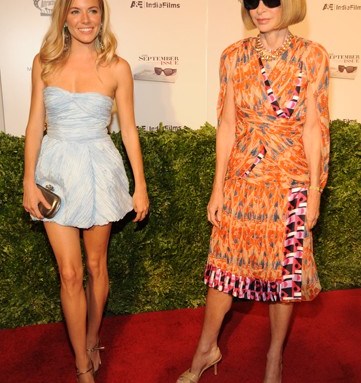 When Vogue was producing its September issue in 2007, ad pages were up by 100 from 2006, Neiman Marcus’ Burt Tansky lamented that he didn’t have enough inventory and nearly $50,000 worth of work was thrown out when Anna Wintour cut pages from one of Grace Coddington‘s elaborate fashion shoots.

That, of course, was a very different time in publishing and retail. But at Wednesday’s premiere of R.J. Cutler’s documentary “The September Issue,” Wintour insisted that a film chronicling her process these days wouldn’t be much different. “It’s still the same team,” she said as she hurried into the screening at MoMA.

“I think it’s just part of the process,” Miller said afterward, appearing to take the criticism in stride. She then joined others who stuck around for a postshow Champagne including the film’s unofficial star Coddington, as well as André Leon Talley, Diddy, actor Jonny Lee Miller (who’s about to appear with Sienna Miller on Broadway), models like Karlie Kloss and Raquel Zimmermann and late Vogue editor Diana Vreeland’s grandson Nicholas, a Buddhist monk.