Narciso Rodriguez and the Windy City are developing quite a relationship. 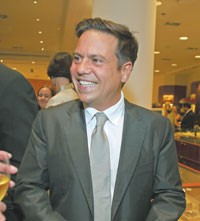 CHICAGO — Narciso Rodriguez and the Windy City are developing quite a relationship.

In October, the designer charmed fans during a personal appearance at Neiman Marcus here. In April, he returned for a spot on “The Oprah Winfrey Show,” and flew back into town last Wednesday for the University of Chicago Comer Children’s Hospital benefit hosted by Barneys New York.

“I love any reason to come to Chicago,” said Rodriguez, who sported a Jil Sander suit and Vans footwear. “I love the city. I’m beginning to feel like a regular here.”

“The women’s collection has grown so much over the past few years,” he said. “The price point has broadened. The collection, overall, is broader. I really wanted to cement that and then work on accessories.”

“He’s a very giving guy,” said Socol, who also came in for the event. “He’s the greatest, nicest guy you could want to meet.”

Cocktails and luxurious fall gowns by Rodriguez positioned at the store’s entrance greeted some 200 guests, who raised about $50,000 for the hospital, which opened in February.

“It’s the first time we’ve ever turned our designer area into a nightclub,” Socol said.

Prior to dinner, Dr. Steve A.N. Goldstein, Comer’s physician-in-chief, presented Narciso with a doctor’s lab coat bearing the designer’s name, stating: “Now you’re one of us.”