Some designers and houses simply followed their own inclinations for spring, with results ranging from pretty layered dresses to graphically printed skirts and even tops in pasta patterns. 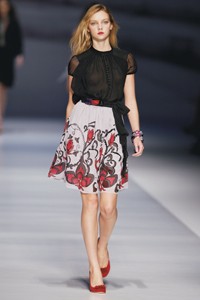 Some designers and houses simply followed their own inclinations for spring, with results ranging from pretty layered dresses to graphically printed skirts and even tops in pasta patterns.

Etro: Veronica Etro gathered together a flurry of some of the boldest prints around — exotic arabesques, mandalas and scrolling florals — into one buoyant spring collection. On some runways, such a whirlwind of patterns and cultures would have sucked the air out of the room. But Etro is one of the family and knows her way around the house’s prints. And this was one of her best collections in seasons.

She paired girlish chiffon blouses with full skirts printed like Iznik tiles, or lotus blossoms, feathery paisleys or sometimes a patchwork of all of the above. A butter yellow gown was appliquéd with smart black scrolls at the waist, while ombréd dresses in cobalt blue, deep jade and raspberry pink were wound round with wrapping ties. Striking in its confidence and its pretty attitude, Etro is on the right track.

Blumarine: The entry scene at Blumarine was sweet and seductive — dozens of long-stemmed roses strewn on round beds covered in floral silk sheets…champagne and hors d’oeuvres to tempt arriving guests. And what runway delicacies did Anna Molinari have in store for spring?

Well, the pint-sized Italian designer referenced many points of inspiration — Cubism, Erte and the Seventies London store Biba — and then crammed them, at times haphazardly, into a single theme: the layered dress. It came short and long in chiffons, tulle and lace, and almost always had a gathered drop waist and a plunging V-neck, the better to reveal another layer of lace in the form of a slipdress. For effect, she tossed on the occasional oversized cardigan and set baubles, sequins and rose-bud embroidery on necklines, shoulders and pretty much anyplace she fancied. It was all a bit repetitive and overdone, to say the least.

Yet Molinari showed moments of restraint, as in a terrific, low-slung double-breasted cardigan, which slouched nicely over a beaded ivory silk twill tank and wide black chiffon pants. Molinari is Milan’s prized confectioner of sugary feminine clothes, but this time, she overindulged her sweet tooth.

Moschino Cheap & Chic: “Truly Italian” was written on the green, white and red invitation for Moschino Cheap & Chic’s spunky spring collection. While the show’s opening exits — clusters of pasta, tomato and basil printed on black silk shirts or embroidered on sturdy linen miniskirts — took that statement literally, the rest of the show could better be described as ironically Italian. The Cheap & Chic girl may have Italy in her heart, but she’s also raring to leave Mamma’s home.

So, once off the boat, this adorable fanciulla ditched her red, white and green ribbon wedges for more adventurous fare, which ran from terrific, such as a fuchsia-and-red taffeta dress with big hearts on the skirt, to questionable, such as a transparent raincoat seamed together with orange, green and purple ribbon. She experimented with smatterings of hippie printed chiffon dresses before finally settling down with some great red, white and blue polkadot skirts and nautical striped shirts.

Menichetti: Just minutes before the show, Roberto Menichetti described his collection as “revolutionary minimalism.” By Menichetti’s standards, that meant a more uptown, girly look worked with his staple sportswear undercurrent.