Boutiques in Flushing, Queens, N.Y. have created a strong bootleg culture in the area, with young hip-seekers flocking for replicas of the latest fashions.

Dolce & Gabbana’s resonance with the Chinese market is not a done deal as far as bootleggers are concerned.

In visiting a labyrinth of malls in Flushing, Queens — New York City’s largest Chinatown — WWD uncovered various dresses imitating Dolce’s Sicilian-homemaker after-midnight attitude as well as knockoffs of its signature logo. This just two months after remarks about Chinese culture were posted on social media by designer Stefano Gabbana that many Chinese found insulting and forced the abrupt cancellation of the brand’s fashion show planned in Shanghai. In the time since, blue-chip Chinese retailer Lane Crawford has dropped the label, while numerous high-profile Chinese celebrities have pledged to never again purchase or promote the brand.

Despite the hubbub, Flushing’s hawkers said they were unaware of Dolce’s maligned status in China. One dress for sale at the New World Mall, fashioned from a gilded heart jacquard — is nearly identical to one on sale with My Theresa for $1,533. Another boutique sold an array of tea-length, figure-hugging floral dresses that a sales associate referred to as “Dolce & Gabbana style.” At the newly constructed Red Sun City Shopping Mall — a youth mall which opened there over the summer — a cardigan appliquéd with “D” and “G” patches was proudly displayed on a wall. Most shopkeepers noted that their wares had been imported from Hong Kong, rather than Mainland China. 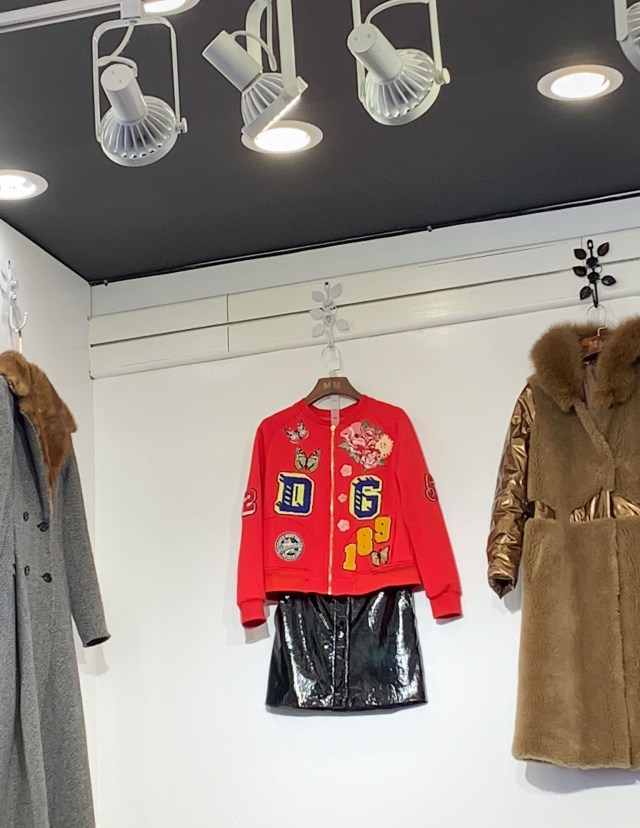 A cardigan with Dolce & Gabbana’s initials at a store in Flushing, Queens, N.Y.  Misty White Sidell/WWD

Flushing’s many malls overflow with an array of trendy imitations, chosen to suit the taste and needs of the local market. Merchandise carefully aimed at Flushing’s Chinese and Korean communities has created a strong knockoff culture there.

These shops’ assortments offer a real-time window into the Asian market’s preferences — making Flushing something of an underutilized vacuum for style observation. On Friday and Saturday night, restaurants fill with young hip-seekers on dates, dressed in Comme des Garçons and Valentino facsimiles; the area’s sidewalks are lined with pedestrians that are meticulously on-trend.

Shopping in Flushing, with its endless maze of stalls and shops that operate with questionable legality, typically takes two forms. Contemporary malls see fashion shops scattered amongst food courts, hair salons and restaurants — all housed in a shiny package that is a new real estate development, as is the case with the New World Mall (opened in 2011) and Queens Crossing (largely renovated in 2016).

The quick turnover of merchandise there demonstrates the rapid speed at which market preferences change. Over the summer, shops and stalls were laden with bootleg Off-White, stylized with various creative liberties like a bucket hat reading, “Off-Weth.” Those imitations, though, have since dissipated — replaced with riffs on the Fendi and Givenchy logos. 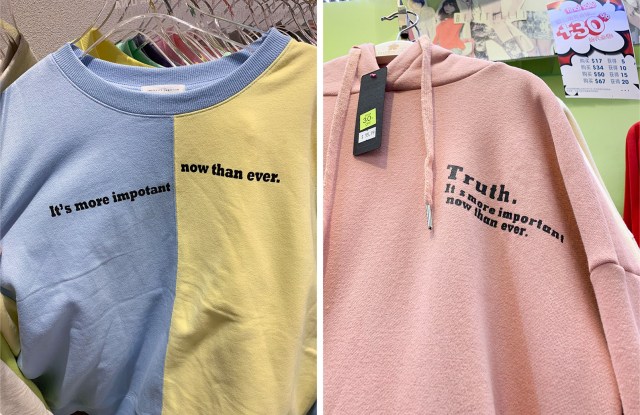 Supreme continues to hold an important presence in the neighborhood. There’s even a secret Supreme resale store hidden within a far-flung Main Street corridor, which shares walls with a Korean noodle counter and a shop selling “Thom Browne” wool cardigans, so dead-on, they could have fallen off the back of a truck.

Recent Supreme knock-offs found around Flushing are something like fashion fan-fiction products — placing the brand’s logo alongside popular iconography from across the Asia-Pacific region. A store there, aptly named Fashion City, is chock-full of Supreme collaborations that will never be. 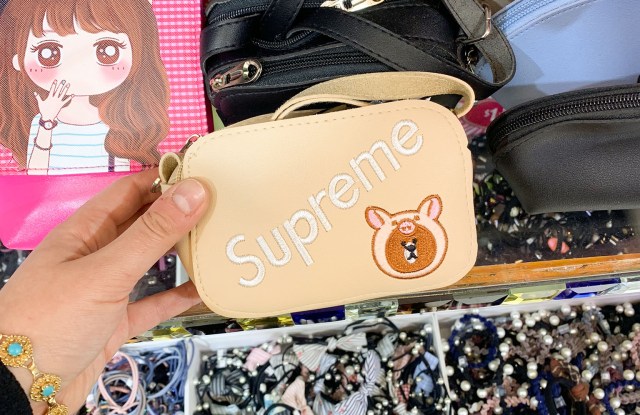 At Fashion City, “Supreme” merchandise is something like fashion fan fiction, here featuring the brand’s name alongside a character from Line App Friends.  Misty White Sidell/WWD

The shop — occupying the corner of Roosevelt Avenue and Union Street — is an epicenter of fashion oddities. Recent trips have seen bootleg Fall Out Boy concert merchandise, “Gucci” hair clips and socks that say “Let’s Diet” on the ankles. Shoppers can meander about — with K-pop groups like Blackpink and EXO blaring overhead — and peruse racks of clever T-shirts, like one that was recently spotted, featuring an illustration of a peanut that had given birth.

In Fashion City’s eyes, a brand’s designs are just the starting point for a counterfeiter’s imagination. Such is the case for its streetwear riffs, like a child’s “Supreme” cross-body handbag featuring a cartoon from Line App Friends — a character family developed by Japan’s biggest social-networking platform.

Among the shop’s extensive cell-phone case selections are covers featuring Supreme’s logo alongside Anpanman caricatures — the Seventies-era Japanese cartoon that, upon the 2018 release of BTS’ song by the same name, expanded its influence across Asia. The cartoon is a superhero with a bean-filled pastry for a head.