Dolce & Gabbana is ready to pounce on accessories. 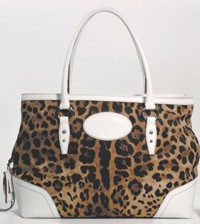 MILAN — Dolce & Gabbana is ready to pounce on accessories.

In a bid to strengthen their brand identity and pump up their accessories profile, Domenico Dolce and Stefano Gabbana are launching a collection of leopard-print canvas bags, belts and other items for spring. Called Animalier, the line is expected to become the brand’s iconic accessories and will be continued each season.

“Almost all leather goods brands have a logo; whether it’s a print or lettering, it’s something recognizable,” said Gabbana. “We were looking to identify our own logo and we thought the leopard print was the most recognizable [symbol]. As soon as you see it, you immediately think Dolce & Gabbana.”

Indeed. The designers first showed the tan-and-black pattern in their fall-winter 1990-1991 collection (Linda Evangelista walked in a leopard coat) and since then it has become a mainstay in the Dolce & Gabbana style canon. The designers use it in myriad ways, from the lining of a coat to wall coverings in their stores.

“The leopard print is very visible and many [other brands] have copied it, but it has always been synonymous with Dolce & Gabbana,” Gabbana said.

The house is known primarily for its big-ticket leather and exotic skin bags, but Gabbana said the canvas collection is positioned to draw a wider audience. “Animalier will be more accessible to more people,” he said.

The collection features some 20 bags, including shopping, hobo and messenger models. Retail prices start at $395 and top out at $1,075; average price points are between $675 and $725.

Belts, wallets and small purses round out the offering. As a test, the company also introduced a pair of ballerina flats and a headband in the exclusive pattern that mimics the natural appearance of a leopard’s coat.

The sturdy cotton fabric sports spots in different sizes, and the surface, while flat, looks textured, thanks to a special production process, which takes four stages of printing.

Trimmed in either white or brown leather, the bags feature decorative touches, including a leather flag embossed with the Animalier name and logo: two seated leopards joined by a chain link.

Gabbana said most models would be continued each season and updated accordingly. “Animalier bags can become trendy, but the concept is not about creating an ‘It’ bag for one season,” Gabbana said. “Instead, it’s about creating the basic Dolce & Gabbana bag.”

And with it, advancing margins. Accessories continue to grow for the Italian fashion label. In Dolce & Gabbana’s 2006 fiscal year, which ended March 31, bags and shoes represented 31 percent of women’s wholesale turnover, up from 28 percent in 2005. Exact euro figures were not released.

“Leather goods are performing really well for us — it’s one of our largest growth categories — and it was the moment for us to come out with an important, recognizable collection,” Gabbana said.

While a forecast for Animalier sales was not available, Gabbana said clients in all markets have responded “extremely well” to the collection.

“We’re really focusing on this project and not just in the U.S.,” Gabbana said. “Animalier is very big for us and for the brand.”

The collection hits Dolce & Gabbana stores, shops-in-shops and franchises in late November, and a full rollout is planned for late December and early January.

Gabbana said the duo was planning to shoot a separate ad campaign to support the Animalier launch, but has yet to decide when it will run.