Donatella’s New Day: ‘Stronger’ Than Ever As Business Revamps

Feeling better than ever, Donatella Versace, who spent six weeks in rehab this summer for drug-related issues, was in London to promote her latest fragrance. 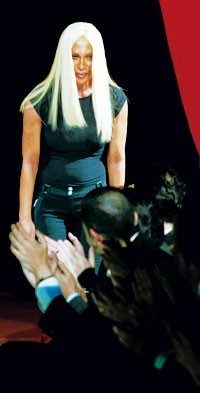 LONDON — “I’m proud, I’m passionate. I’m a fighter — and a survivor,” said a bright-eyed, upbeat Donatella Versace from her penthouse suite at Claridge’s one evening earlier this week.

In London to promote the launch of her latest fragrance Crystal Noir, Versace — who spent six weeks in rehab this summer for drug-related issues — told WWD, “I feel great. I feel strong. Life isn’t easy for anyone, but now I feel like I can face it with strength.”

In her first interview since completing the program in the U.S., Versace downplayed the impact of the break from her design work. Her spring collection, she said, was mostly finished before she left Italy. “Most of it was already done in May, and then I worked on it again in September. I missed, more or less, three weeks of work. And no, I definitely couldn’t work in there,” she said with a throaty laugh, referring to the U.S. clinic.

Dressed in skinny black-and-white wool trousers, a black T-shirt and platform boots, Versace talked animatedly and clearly about fashion, her ambitions for the company, her children and the next chapter of her life.

“I have about three times more work than ever before — and that’s saying a lot. There’s a lot going on: We’re repositioning the company and some of the labels and there’s work to be done,” said Versace over a few Marlboro reds and a glass of still water.

Versace will make a personal appearance at Harrods today to promote the exclusive launch of the fragrance — something she’s rarely done in the past. She’ll also be cutting the ribbon on the new Versace Beauty counter in the store’s famed all-white beauty hall. On Thursday evening, she held a small cocktail party for about two dozen U.K. beauty editors to chat about the fragrance, followed by a small dinner for friends at Cipriani, with guests including Madonna and Guy Ritchie, Mario Testino, George Michael, Elizabeth Hurley, Christian Slater and Joseph Fiennes.

“You can’t avoid the reality of the market these days, and we need to focus on the product. We’re coming from a period when the economy has been bad, when business has been bad. There’s no space even for the smallest mistakes,” she said, adding the company would report sales growth in 2005.

Versace said she wants to see women wearing her clothes, which is why she toned down the mood this season and opted for a low-key approach — low-key, of course, being a relative concept.

“It was a more mature collection, it was for the market, for the real world. And I took a softer approach. The fabrics were softer, lighter, more liquid. Instead of the zippers and accessories, there were lots of small details like piping, gold trim, stitching, special draping and pleating. One of the silk dresses was held together only by a knot in the front. It was as if the clothes were laid bare on the runway. There was nothing loud about them. They’re not overdone,” she said.

The company, too, is undergoing major changes. At the top of the list remains the plan to sell a minority stake in the business to an outside investor. While no deal has been struck, the company continues to say it hopes to complete a transaction by the end of the year.

As reported, Versace is cutting costs, merging similar operations such as corporate communications and advertising to boost efficiencies, striking more licensing and franchising deals and speeding up product development and deliveries. The company plans to refocus and rename the secondary lines under a new label, and revamp the licensed Versace Jeans Couture for spring. Donatella Versace, however, declined to go into detail about the changes, and said announcements would be made in November.

The company is also interested in selling its watch and beauty businesses, according to industry sources. At least one of the deals is expected to take place by the end of the year, although Versace declined to comment.

Donatella Versace confirmed she will no longer show couture on the runway. “It was a painful decision for me,” said the designer, who did not show in July in Paris. “I love couture, but I am also a very modern person. The idea of an entire collection of dresses that can take up to three months to make does not fit into the reality of the business right now. And so much money for what? One show?” she said, adding the budget for the couture show was shifted into additional marketing and advertising for the ready-to-wear collections.

Instead, starting with the spring 2005 season, Versace will integrate a handful of couture pieces into each collection. The pieces will be offered along with made-to-measure in all Versace boutiques. Versace will also be designing one-off pieces for the red carpet — and for her coterie of celebrity pals.

And speaking of celebrities, her decision not to stuff her front row with stars appears to be a temporary measure. “I needed a season to stop and think, and I wanted total focus on the clothes. We’ve had celebrities at the show for 25 years. It’s a natural thing for us, and a pleasure to dress them.”

She also talked about her new approach to parties. This season, Versace invited 45 editors and friends to her home on Milan’s Viale Majno, instead of holding the usual champagne-and-risotto-fueled bash for a cast of hundreds in her late brother Gianni’s old apartments at the Versace palazzo on via Gesú.

“I wanted to do something more intimate and actually have real conversations with people, instead of waving and saying, ‘Hi, how are you?’ I’m really enjoying talking to people privately,” she said.

It’s clear that Versace’s personal and family relationships are more important than ever. Asked about her daughter Allegra’s new role as majority shareholder of the company, she smiled.

“She’s not a colleague! She’s my baby, my daughter. And she’s a very smart girl — and I’m not saying that because I’m her mother. Everyone says it. She wants to know everything about the business, and we talk about business as mother and daughter. We love one another. She’s very focused on her studies right now, and she’s doing brilliantly. I am so proud.” Allegra has just begun her freshman year at a U.S. university.

As for Daniel, her 13-year-old son, Versace said she’s having fun with him. “I spend a lot of time with him, and he is my greatest critic on the collections. I’m actually petrified of what he’s going to say about them,” she said with a laugh.

While there may be a new era dawning, this is something of a deja-vu moment for Versace. Once again, she’s working with Giancarlo Di Risio, the tough, no-nonsense manager with whom she launched the Versus collection in the early Nineties. Di Risio, formerly managing director of Ittierre, the Italian licensee that manufactured Versus before the company took production in-house, is now chief executive of Versace.

“I’d been trying to hire him for three years, but he was at Fendi. He’s a great friend — and he’s smart, strong and fast. And he’s got a lot of enthusiasm for the business,” she said.

And while Di Risio’s new strategies and plans for the company may be dominating her time, Versace is sticking to some of her old routines. “I’m still doing aerobics — about 30 minutes a day — and free weights. I did so much kickboxing in the run-up to the show that my trainer told me I had to slow down.”