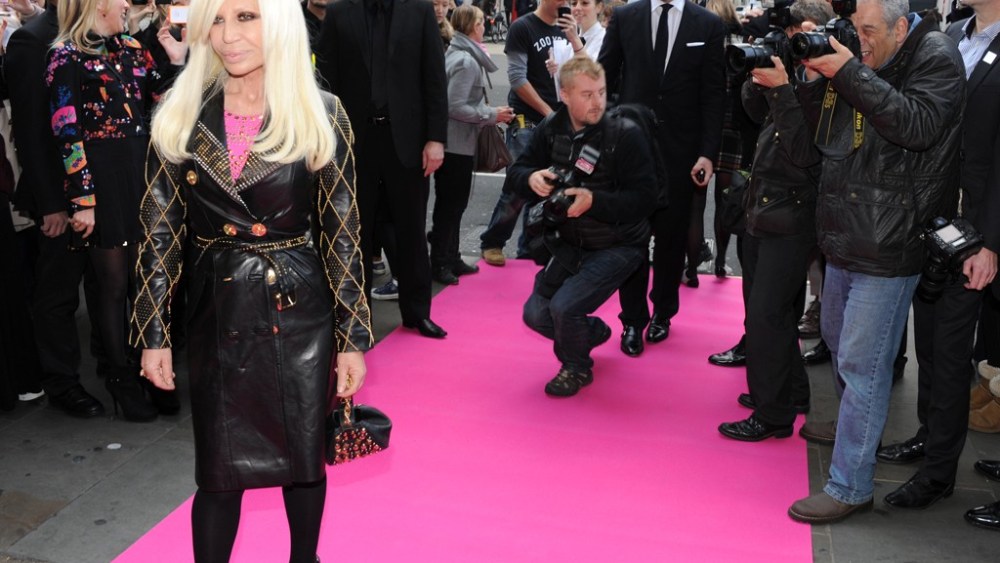 LONDON — Hennes & Mauritz rolled out the hot pink carpet for Donatella Versace, who paid a last-minute visit to the Swedish company’s Regent Street store here Thursday morning to meet shoppers eager to buy a slice of the Versace fantasy.

Poured into a studded silk dress priced at 129.99 pounds, or $205.38 at current exchange, and a studded black leather trench costing 199.99 pounds, or $315.98, the designer arrived to a loud chorus of hoots and whistles from hundreds of young men and women snapping pictures, and filming with their cell phones.

Some of them had spent the night on the pavement so they could be among the first to buy the collection, which is rolling out worldwide this week.

“I feel very emotional,” Versace told WWD. “I really want to see how they are going to mix and pair the clothes, how they will wear them.”

Versace said she was wowed by the freedom she had at H&M. “Do you see these studs?” she asked, pointing to her figure-hugging pink dress. “Usually, with low-cost clothing, they’re pressed on, but these are real. And I only worked with pure materials — 100 percent silks and real leather.”

By 8:30 a.m., when Versace arrived, the line outside H&M had curled around the block to Argyll Street.

Nor was the hubbub restricted to London. In Milan, a crippling transportation strike and cold temperatures did not deter shoppers from lining up at dawn outside the H&M store in Piazza San Babila.

Giacomo Cavallanti, a stylist from Milan, said he had arrived at midnight so he could secure a men’s bomber jacket, among other things. “You need personality” to wear Versace, he noted.

Students were among the first in line, including visiting ones. Isabel Grillado and Auxi Pozuelo, from Cordoba, Spain, arrived at 6 a.m. Several shoppers came prepared, holding printouts of specific items from the H&M Web site.

By the cash register, Claudia Riva, a banker from Milan who arrived shortly after 1 a.m. and was 10th in line, was paying for a black studded skirt, a bag and T-shirt.

Over in Paris, the first person in line at the Boulevard Haussmann store was Berry Fall, 24, a sales associate for H&M, who explained it was the only way she could snag her favorite pieces: a studded leather jacket and short pleated skirt. She arrived at midnight, equipped with fur jacket, gloves, covers, a laptop computer and drinks.

“At first, it’s hard, especially when you visualize the time, but it gets better,” she laughed. “When you are with your friends, it’s OK.”

Stéphane Tayar, 38, had ducked out of work in hopes of snagging a pair of black men’s brogues.

“I got here 10 minutes ago. I tried to slip to the front of the line but it didn’t work,” he said, pointing to the colored bracelet he had been handed by shop staffers. “My wife told me there wouldn’t be a lot of people. I figured she would know, since she spends her time on Twitter.”

Top of the wish list for many of those waiting in line were the studded leather pieces like the biker jacket and sleeveless dress, which were seen as especially good value in light of Versace’s usual price tags.

High school student Fallonne Matundu, 17, said she had worked over the summer to save up the cash for the biker jacket. “Versace is colorful and glamorous, but also rock ’n’ roll,” she said. “I thought it looked good on Lady Gaga, and it looks like [Donatella Versace] designed pieces similar to those she has been wearing.”

On Wednesday evening, French Vogue editor in chief Emmanuelle Alt hosted a preview shopping party for 1,000 winners of a competition organized by the magazine. As Misshapes DJ Leigh Lezark spun tunes and waiters served Champagne, the shoppers mingled with local celebrities including actresses Emma de Caunes, Zoé Félix and Aïssa Maïga. Within 15 minutes, the rails had been picked clean of all black dresses, but the French crowd seemed less keen on the more colorful items.

In Berlin, customers started lining up at 4 a.m. in front of the Friedrichstrasse location, with leather jackets among the most sought-after items. The event was orderly, with H&M staff almost as numerous customers, good door security and a system of timed entries.

In Shanghai, hundreds of people waited — or paid others to wait for them — outside the H&M store on the glitzy shopping street of Huaihai Lu. A fight broke out just before the store opened amongst a group of men hired to wait on behalf of shoppers who did not want to stand in the line: The queue began to form outside the store early in the afternoon the day before.

The professional queuers, a common phenomenon in Shanghai, as well as a mix of migrant workers also paid to be placeholders, were mixed in with a predominantly male group of customers. Some said they were there to grab up as much of the Versace collection as they could and then resell it on Taobao, China’s largest e-commerce site.

“There are so many Chinese guys,” marveled Chiara Salmeri, an Italian who arrived at 5:45 a.m. “In Italy, there would be no men queuing. I am so surprised.”

Martin Choo, a 22-year-old college student, said Versace was the first brand that got him interested in fashion. He said he planned to purchase a dress for his mother and maybe a couple of shirts for himself.

In Hong Kong’s Central district, about 300 people awaited the 8 a.m. opening. Close to the front of the line were Kyle Wu and Chris Yip, two students from the Hong Kong Design Institute, who had been outside the store starting at 6 p.m. Wednesday night.

“It’s OK because it’s our day off today,” said Wu, who was hoping to get his hands on a geometric print shirt that was displayed in the window.